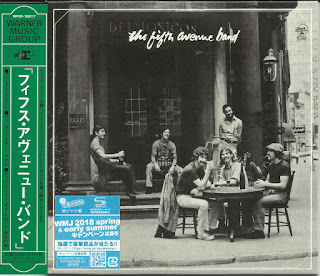 Kenny Altman, Jerry Burnham and Peter Gallway started their musical partnership while attending high school in New York City.  As The Strangers, they recorded a little heard 1965 single 'Land of Music' b/w 'I Need Your Love Inside Me'.

By the late-'60s the trio were members of The Fifth Avenue Band (the line up rounded out by drummer Pete Heywood, vocalist Joe Lind and keyboard player Murray Weinstock).  Signed by Reprise, the band's self-titled 1969 debut was interesting for a number of reasons, including the fact it teamed them with Lovin Spoonful alumis Jerry Yester and Zal Yanvosky (Lovin' Spoonful producer Erik Jacobsen handling five tracks).  Certainly a result of the Lovin' Spoonful connection, numerous reviews and references have compared  "The Fifth Avenue Band" to the Lovin' Spoonful catalog.  To our ears, with the exception of 'Nice Folks', the comparison isn't really there

With Altman and Gallway responsible for the majority of material, the set was actually quite diverse.  The opener 'Fast Freight' recalled The Band-styled of rural rock; 'One Way or The Other' 'could haven been mistaken for The Fifth Dimension (not kidding) and 'Good Lady of Toronto' sported a pretty country-rock melody.
Bad-Cat

Because it was produced by one-time Lovin' Spoonful members Zal Yanovsky and Jerry Yester, and because they were also based in Greenwich Village, the Fifth Avenue Band's sole and self-titled album has generated its share of Lovin' Spoonful comparisons. It's really not too close in sound to the Spoonful, however, even if it shares a little bit of the same sort of good-timey/easygoing reflective mood of some of the Spoonful's vintage material. It's far more colored by late-'60s rock in its arrangements, for one thing, sometimes going into a somewhat heavier, occasionally jazz-funk-influenced sound than what the Spoonful were renowned for, though there are bits of country as well.

To be a little harsher, it also doesn't have anything on the order of the classic original material the Spoonful generated at their peak. It's not at all bad, however, with a gentle melodic vibe and vocal harmonies that tend toward the optimistically upbeat even on the somewhat more pensive tunes, though it's more a pleasant listen than a memorable one. Some of the more forceful songs might also recall some of the Nazz's work in their blend of pop/rock with slight soul spice, though the Nazz were more Beatlesque in their approach. They come closest to hitting that kind of stride on the closing cut, "Angel," which is the album's highlight.
by Richie Unterberger 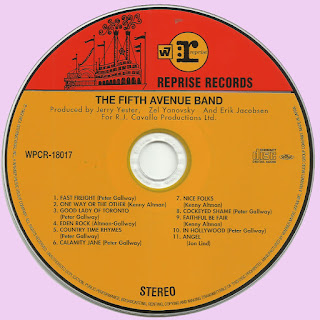 Free Text
the Free Text
Posted by Marios at 8:18 AM 3 comments: