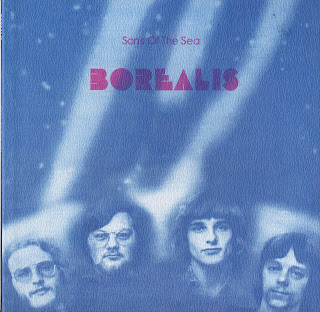 Audar Records produced the Borealis In July 1972. It was the first rock album recorded in the Atlantic provinces. The record company was kind of expecting the usual country or folk materials, normal during that time, but we had other things in mind, although we did not mislead them. Song 1, "In the end". made the Top Ten for two months in St. Johns, Newfoundland.

However, a lack of promotion by the hand members, who thought record companies did such duties, soon consigned this LP to collector's shelves and bargain bins in Woolworth deportment stores. Nevertheless, for many years the hand relieved (CAPAC cheques of varying amounts, indicating repeated airplay someplaces, somewhere in Canada. "business", song one on side two was a funky sendup of local business practices, as experienced by the band, it was thought to be the most worthy, as satire. and was designated to be the first "single". Instead, the record company pressed it has to be the "B" side, with "In the end” as the "A" side.

The company then mastered the LP with "In the end" as song one, side one, perhaps because it was the least jarring to the region's many country fans. The album was recorded the night before Borealis opened for the famed Lighthouse band. The recording company's timetable would not be overthrown by a group of young musicians who professed So be opening for a supergroup the next day! And so, a weekend passed, I remember most of it the ports when 1 was awake. It was worth every second!

Professor Fuddle's Fantastic Fairy Tale Machine
The « Fuddle album was inspired following an idea by Alan Ball, who went on to join the Canada Arts Council. Alan had the idea of writing a play than explain, to children, how computers work. Nowadays, of course, children toil adults how computers work, but such was not the way of the world back in 1971 Personal computers had not been invented. Computers were, in tact, huge complex machines, taking up entire floors of space, in places like universities.

Teams of “programmers” operated these humming contraptions, feeding the machinery with cards on which data was “computed” by perforating, or piercing, the cards with strategically olaced holes. But in digress. The story of the play is a 1070's fairy tale, set in a fishing hamlet in Newfoundland ('New-fun-Land'), Canada's most easterly island province. Jeff, a young boy of about 12. visits his uncle, Professor Fuddle, who has acquired an old union hall in the hamlet, in which to build his experimental 'computer'.

The opening tune introduces and animates the huge machine, which takes up the entire width of the stage. As Jeff arrives, the professor is seated before the machine's controls at centre stage. He is testing the machine's capability to produce 'holographs' of storybook characters. Snow White appears from the machine's 'good' side, hiding from a wicked queen in a haunted forest, singing the LP's second song. 'Rain's my name', and dreamily dancing to the computer's generated music of Philomel, from Shakespeare's 'Macbeth'. Snow White's 'Seven Dwarfs' arc produced from the computer's 'good' side, during song 5, as 'dancing masters', local wooden dolls, normally suspended on sticks (the amchine appears to have absorbed the local culture).

From the 'evil' side of the computer, ghosts of mermaids from seagoing mythology, haunt the witch into recanting her ways, via the song 'The opera cracks the bell'. As forgetful old professors might do, Professor Fuddle has forgotten to 'teach' it to count - a major flaw, the audience learns, when two huge actors appear as the 'dancing masters', supposedly portraying the 'Seven Dwarfs'. So, Jeff and his assembled characters encourage the audience to help them program, or 'teach' the computer to count, and to 'learn' tho difference between 'big' and 'small', by singing the 'Count Comprison Song'. Songs 'Indigo Evening' and 'Sonnet Song (Plenylunios)' add mood and moral purpose to the plot, as presentations for younger minds were supposed to do, back in the 1970's.

The witch's 'evil bell' cracks, to the tune 'The Opera Cracks The Bell', and the spell of her thousand year reign of evil is broken. The play, staged at the St. John's Arts & Culture Center as its Christmas presentation, was a success, according to the next day's reviews. Alan's play wont on to be included in a Collage of Canadian Children's Plays. Following which, every child around the world over the age of three learned to make computers sing and talk, and we adults slunk back to our caves. The rest, as they say, is History. And so is this forgotten LP.
by Paul Bradbury 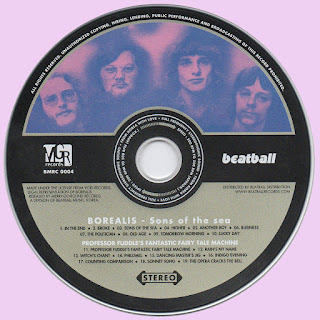