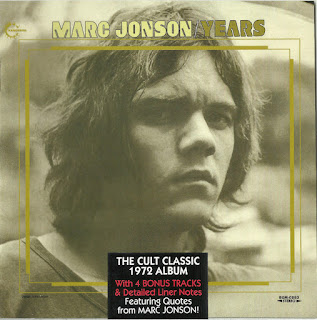 The Real Gone Music label has just rereleased the out-of-print 1972 cult album Years by Marc Jonson. Real Gone touted the work as one of the most obscure cult albums ever as its initial vinyl release was quite limited. The newly remastered edition was sourced from original tapes dug out of the Vanguard label vaults. Years is difficult to classify by genre, roughly fitting into the category of psych-folk. The album has a transcendental, brooding feel that incorporates the intimacy of the singer-songwriter era with baroque elements prevalent in some 1960s recordings, but ultimately sounds ahead of its time - 1972 in a way that looks forward to the alternative music of the 1980s and ‘90s.

At 21 years old Jonson sang, played guitar, drums, keyboards, produced, and wrote all the songs on Years. The album cover art features a black and white photo of Jonson with long hair, a somber expression, and facial features that resemble Neil Young, who in 1972 released his legendary Harvest album. Years sounds at times like Harvest, particularly the two songs on which Young was accompanied by the London Symphony Orchestra. According to Jonson, there was a classical recording session going on in the studio where he was working so he decided to incorporate some harpsichords that were left lying around and hired some of the classical musicians to play on string arrangements.

The baroque elements on Years, complemented occasionally by a few good solid drum whacks, bring to mind sounds that an early Elton John explored on works like his 1970 self-titled album. Jonson’s melodic intonations and quasi-classical accompaniment sound at times like an early Leonard Cohen, as do his impressive, often dark, lyrics, which are probably not quite Cohen’s level since nothing really reaches that standard, but are impressive nonetheless.

Jonson said he was influenced in the making of Years by Van Morrison’s 1968 classic, Astral Weeks. The classical styling and unusual time signatures on both of the albums could certainly be compared, but Morrison is apparently also an influence on Jonson’s vocals. Jonson’s voice is very different from Morrison’s, but Jonson puts his own take on Morrison’s soaring wails. Jonson’s vocal style is similar to that of Chris Bell, a member of Big Star. Years has frequently been compared with the work of Big Star and indeed has the spirit of angst that characterizes much of the power pop genre that the band pioneered. But while the album fits in with the melancholic, reflective side of Big Star, there is not much in the way of the hard rock riffing side of the band captured on songs like “In the Street.”

Years kicks off with “Rainy Dues,” a song that begins with an acoustic guitar riff that is very similar to the riff in the Bruce Springsteen song “Growin’ Up.” Jonson’s release, however, slightly predates Springsteen’s and in the liner notes to Years, Jonson claims he was playing the Gaslight in Greenwich Village with jazz guitar legend Larry Coryell in 1972, and it is very possible that a young Springsteen heard “Rainy Dues” at one of those gigs. The beautifully melancholic piece builds from its acoustic beginning in a dramatic Springsteen-like fashion into its bridge as Jonson’s vocals become increasingly intense right before the mid-tempo rhythm comes in with drums and a few John Entwistle-like audible melodic bass notes. The song ends with Jonson moaning a few transcendent “oohs” before one final anguished scream similar to Springsteen’s vocals at the end of “Jungleland.”

Later in the album, “Mary” provides a showcase for a powerful vocal from Jonson backed initially by nothing but a funky drum beat that Jody Stephens could have laid down for Big Star. Even though Jonson is American, Years often sounds like the dreary British symphonic rock of the era. His voice sounds a lot like Elton John on “Mary,” and the instrumentation and time on the song are highly unusual as harpsichords and string orchestrations make up the bridge before the song closes with Jonson’s high wailing, which sounds similar to John’s higher range.

“Mother Jane,” a subtle, smart antiwar song features acoustic picking similar to Neil Young’s “Old Man.” However, it seriously diverges from the musical path of “Old Man” when it reaches the middle of the song in which the bridge is signaled by the beautiful strum of harps. The song contains the powerful line, “England’s at war oh my it’s 1805/To print the news you have to risk your life,” possibly in reference to the then current publishing of the Pentagon Papers that showed that the American government covered up the truth about the Vietnam War.

“A Long Song” features interesting classical accompaniment of flute. The album title comes from a lyric in the song, “Years pass as they grow out.” A bizarre chorus of “bum-bum-bum” sang by a few men or multi-tracked vocals starts as the song winds to a close before the chorus fades and the flute closes it out.

“The Return To The Relief” features a jingle-jangle, Byrds influenced riff at the beginning. The lyrics are particularly strong, including at a certain point a creepily repeated goblin-like phrasing of “and then kill you,” in reference to what the speaker will do to the people who have destroyed the world if he is the first person born after the world is destroyed. The song is ultimately hopeful, though, preaching love as an alternative. It has a few movements that segue into each other, but ends with an uplifting, sweeping orchestration. “Munich” is an odd song that features a lot of outlandish studio tricks with vocals. The song is particularly eerie because it features what sounds like an abrupt gunshot. The Real Gone reissue features a non-LP bonus track, “I’m Coming Up To Boston,” a beautiful Tim Buckley-like song with a hazy, harmonized chorus that sounds like the alternative music of later decades.

Years is a worthy rerelease from the Real Gone label. Its baroque orchestration references the most sophisticated sounds of the ‘60s in a psych-folk vibe, which was a bit anachronistic to 1972 as a few years are a lifetime in the music industry. By drawing on the best influences of the then recent past and fusing it with the subtly expressive singer-songwriter idiom, Jonson made an album that was years ahead of its time and a classic, cult or otherwise.
by Jeremy Goldstein,  Apr 30, 2017 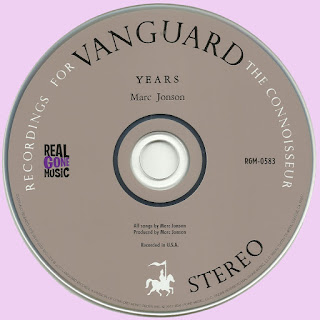 Free Text
Just Paste
Posted by Marios at 2:52 AM 4 comments: