The Fool - The Fool (1969 holland, tasteful blend of psychedelia, r 'n' b 'and folk with experimental mood, original Vinyl edition) 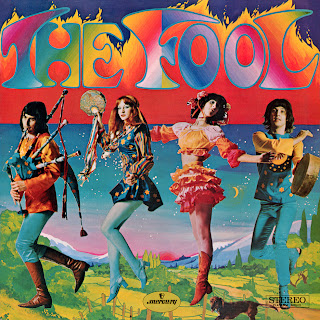 For Susan "the Golden Light" and her Mother

The Fool were a Dutch quartet transplanted to London in the middle ’60s, whose original impact on the rock world was visual rather than musical.  They were two women, Marijke Kooer and Josje Leeger – who designed clothes for people like Patti Boyd Harrison (George Harrison’s first wife) – and with Marijke’s husband, Seemon (Simon) and their friend, Barry Finch they became collectively known as “the Fool,” exemplifying the hippie ethic of the mid-’60s.

They had a shop off London’s Montague Square, where John Lennon was an early visitor.  Brian Hogg’s CD liner notes quote Seemon from the Granada TV documentary, It Was Twenty Years Ago Today: “He walked into our place, and saw our stuff – furniture and posters as well as clothes – and he said ‘This is where I want to live.’”  That established the Fool.  They did concert posters for Brian Epstein’s Saville Theatre, decorated Lennon’s piano and his Rolls Royce and painted the exterior of the Apple building.  They flourished at the height of “flower power” and their distinctive images helped define the era.

As artists they did several album covers, starting with the Hollies’ 1966 Evolution and the Move’s debut album, and perhaps culminating in 5000 Spirits On The Layers Of The Onion by the Incredible String Band – all in an instantly identifiable style.  In 1968 they recorded their only album, for Mercury Records.

I remember that while my friends were getting excited about the Incredible String Band, I – never very fond of folk music – kept telling them, “Yeah, sure, but have you heard the Fool?”   When I played the album for them I made a lot of converts for it.

The Fool is an album with some of the same English folk elements – including bagpipes! – but it is not a folk music album.  So what is it?  Good question.   In an odd way it reminds me of George Harrison’s very under-appreciated Wonderwall Music:  both are early precursors of “World music.”  But The Fool is much more.

The album opens with spacey psychedelic effects that lead us directly into “Fly,” which has a naοve folksy quality but in turn leads (in a direct segue) to a rippling piano, banjos, and a deep organ accompaniment to the second track, “Voice On The Wind.”  Hogg states that Graham Nash, whom they’d met when he was in the Hollies, “acted as producer and he doubtlessly helped sculpt the textured opening two tracks … which served as an atmospheric introduction to the album.  The use of bagpipes and other exotic instruments signaled a wish to create something both adventurous and folksy.”  (I might add that I rarely enjoy the sound of bagpipes – as they are traditionally played – but they work well for me on this album.  Seemon is pictured playing bagpipes on the album’s cover.)

“‘Cry For Me,’ with its plaintive banjo, proved the Fool’s grasp of melody, a feature enhanced by their confident vocals and atmospheric seashore sound effects.  ‘No One Will Ever Know’ blends pop with a jugband feel feel before a now familiar [bagpipe] skirl grabs the casual listener.

“A trumpet, whistles and almost gospel-styled singing inhabit ‘Reincarnation.’  ‘Hello Little Sister’ plays with the riff from ‘Walk Don’t Run’ and more faintly choral voices before ‘Keep On Pushin’ hits a bluesy vein.  The piece is underpinned by a Hammond organ, prompting scholars to suggest the presence of R&B veteran Graham Bond who was often photographed with the Fool around this time.  The eastern-styled [tenor] saxophone break would seem to confirm it.  ‘Inside Your Mind’ is another track hewn from Episcopalia, while ‘Lay It Down’ [which concluded the original album] is full blown intoxicated psychedelia.”

When I first got this album I was struck by the nature of its melodies.  They seemed to derive in part from old English church hymns – blended with blues, boogie and rock.  “Episcopalia” is another way to describe it.  Oddly Calvinistic, I thought then.  But original: nothing else, before or since, sounds very much like it.  And that “eastern-styled  saxophone break” turns into a quote from Rahsaan Roland Kirk playing with Charles Mingus (as recorded in 1962) – a nice touch.

This album dates to the days before “progressive rock” existed, but prefigures it in its adventurousness and wide-ranging musicality.  I always wondered why there was no second album to follow up on this one, but Hogg says, “Unfortunately for the Fool, flower-power was wilting in 1968 [when the album was released] and their efforts herein went largely unrecognized, despite cover art typical of their work.   Their designs were now deemed passι – the Apple building was repainted at the behest of residents, and the collective split up at the end of the decade.”  Frankly, I was never impressed by their style of artwork – the cover of the Move’s first album never did anything for me – and I miss that aspect of the Fool much less than I do their music.

In the early ’70s Seemon and Marijke came to America and made an album for A&M Records, Son Of America (SP 4309). Graham Nash again was the producer (and contributed vocals), and Seemon plays bagpipes in a few spots, but the music is rather pedestrian and ordinary, perhaps the result of using American musicians (including Booker T. on organ), or perhaps the desire for greater commercial success – which eluded it.  This album was not a continuation of the Fool.  Then the couple returned to Amsterdam and split up.  Hogg says that Barry and Josje also returned to Amsterdam, “and, last heard, were still together.”
by Dr. Progresso and Brian Hogg 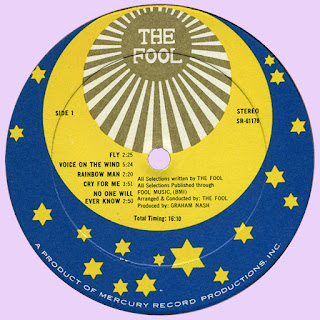