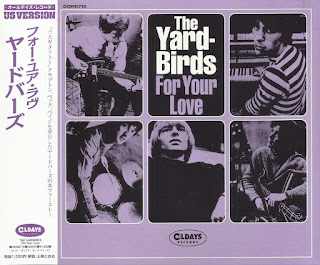 The album commences with its title song, which was at once the first real hit for the band as well as the single song which made Clapton decide to depart. “For Your Love” was presented to the band by publisher Ronnie Beck and everyone in the group, aside from Clapton, loved it. Written by then 19-year-old Graham Gouldman, the song contains a distinct harpsichord by session man Brian Auger and is overall a strong departure from the blues-rock style of most of the other material on the band. Still, it was melodic and catchy and peaked in the Top 10 on the pop charts of both the UK and US. Clapton played the sessions for this song and then immediately left the group.

When Clapton departed, Gomelsky asked Jimmy Page, then the top session man in London, to join the group. However, Page was busy and happy with his session work and suggested Beck, who was sort of an understudy, for the position which Page would ultimately fill himself a few years later. Beck immediately makes an impact on “I’m Not Talking”, with its  heavy rock, crunchy riffs and rudiments along with great rhythmic elements by bassist Paul Samwell-Smith and drummer Jim McCarty. “Putty (In Your Hands)” contains a cool 60s groove while the bridge has some jazz elements, while Calvin Carter’s blues classic, “I Ain’t Got You”, features the fine harmonica playing by Relf for the first time on the album.

“Got to Hurry” is the first real original composition as an instrumental credited to Gomelsky (as “Oscar Rasputin”), but really a jam composed by the group. Rhythmically, this instrumental has surf music elements while it also acts as a showcase for Clapton’s bluesy leads. “I Ain’t Done Wrong” is a driving rocker with blues vocals by Relf and some great rudimental riffs thrown in for fun, while “I Wish You Would” is another blues standard with consistent, upbeat guitar rhythm by Dreja and Relf adding harmonica between every line during the verses. This side two opener also has a bridge section which builds towards a frenzied crescendo and was released as a single in August 1964. Although “A Certain Girl” was just the ‘B-side’ for the previous track, but is the first real shot at pop with a bright sound, strong melody, call and response vocals, and a blistering pop lead by Clapton which sounds like a souped-up Byrds lead.

The Yardbirds sound like a whole different band on “Sweet Music”, a song produced by Manfred Mann who also brought in some outside session players and vocals. The track is interesting because of the players involved, but really out of place on this album. In contrast, “Good Morning Little Schoolgirl” is pure fifties-style pop style with harmonized vocals, Relf’s fine harmonica, and an outstanding, bluesy lead by Clapton. The song was originally composed and recorded by Williamson nearly three decades earlier. “My Girl Sloopy” is an interesting album closer as a fun rendition of a song which had not yet been made famous as “Hang On Sloopy” by The McCoys. The vocals here are odd but entertaining, especially the exaggerated high pitched harmonies and this extended track adds some Beatles elements.

While For Your Love barely broke the Top 100 on the album charts, it set The Yardbirds up for their first American tour, where Beck began to forge his own sound as well as help direct the group’s evolving sound through the mid sixties.
Classic Rock Review 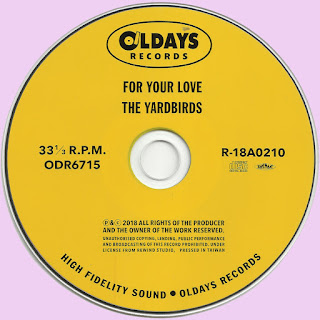 Free Text
Just Paste
Posted by Marios at 5:36 AM 1 comment: