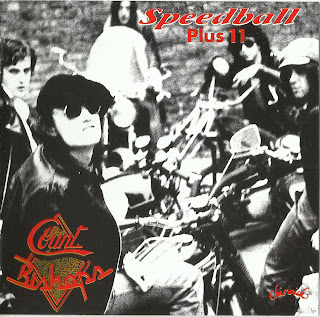 The Count Bishops had formed in June of 1975 from the remnants of a group called Chrome. Rhythm guitarist Zenon de Fleur (aka Hierowski) and New York emigrant and vocalist Mike Spenser, via an advert in Melody Maker, brought in Australian drummer Paul Balbi, and, all the way from Hatfield on bass, Steve Lewins. Paul had not long arrived from the Antipodes, where he had been playing in several bands, and Steve had come directly from the acoustic Spaniel Mountain - now there's a name to conjure with.

Before leaving his native New York, Mike had been in a band called the Kingbees with Johnny Guitar (guitar). In July he had been persuaded to come to London on the promise of a record deal, with an, as yet, non-existent label, and a full date book in the pubs of London: faith is a wonderful thing. The band were named after a New York street gang by Mike.

Up until now the "Speedball" EP has been the only material available from these sessions, and indeed the only Count Bishops record with Mike Spenser as vocalist. In early 1976 Mike departed after a contretemps with a plate glass window, the last in a series of confrontations with inanimate objects that led to the band requesting his departure. He went on to form London's premier garage band, The Cannibals.

The band continued through one album and single for a Dutch label, Dynamite Records, without replacing Mike, before cutting their first Chiswick album with Australian chanter Dave Tice. Shortly after this Steve Lewins moved on to the Wilko Johnson band. With the addition of Pat McMullen on bass the band went on to release a further two albums for Chiswick. They finally disbanded after the tragic death of Zenon in 1979 from injuries received in a car wreck.

This CD consists of the original EP, released on 28th November 1975, exactly 20 years ago, plus the rest of the material recorded at the Pathway sessions, and two cuts from a previous session at [future Stiff Records' bossman] Dave Robinson's studio above the Hope & Anchor pub, with a slightly different line up.

As mentioned in the sleeve note to the Chiswick Story, 'Walking The Dog' and 'I'm A Man' were cut at these sessions, with the former's bass line registering it unuseable (note that Steve Lewins was not on this session). Since then the multi-track tape has surfaced, confirming my fragile remembrance of the 'Walking The Dog' story, and featuring two cuts of Tm A Man', as well as two cuts of 'I Want Candy' and several attempts at Otis Redding's 'I've Got Dreams To Remember', with seriously fractured lead vocal.

Original mix downs of Tm A Man' and 'I Want Candy' have also surfaced, and close this CD. The version of 'I Want Candy' is interesting since it pre-dates by 3 years the Bishops single (NS 37/CHIS 101). The version of Tm A Man' is via Bo Diddley, Muddy Waters' 'Mannish Boy' and incongruously David Bowie's The Jean Genie'. In hindsight The Count Bishops "Speedball" EP is a link between the pub rock of the early 70s and the punk rock that arrived snarling and kicking a year later.

Though based on the early Rolling Stones recordings, the Count Bishops revved up their punky R&B approach and whizzed through the songs at breakneck speed. In fact at a Count Bishops gig Upstairs At Ronnie's, Malcolm McLaren once bent my ear for a good deal of the evening as to whether Mike Spenser was the man he had been looking for to front the new group he was putting together. Cheeky bugger - trying to nick the lead singer of our only act.
by Roger Armstrong, 1995 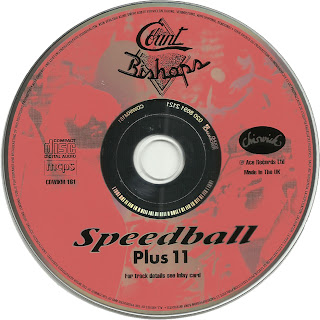