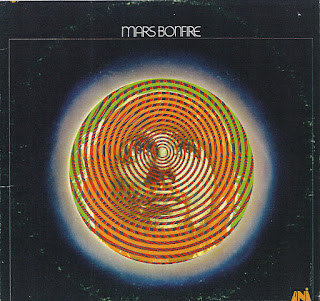 The power of the song has been blunted over the years, thanks to endless cover versions (including a duet between Ozzy Osbourne and Miss Piggy on the Kermit Unpigged album), and ironic use in sitcoms, films, and TV commercials. A listen to Bonfire's own recording of "Born to Be Wild" on this solo outing can remind one just how powerful the song really is.

Bonfire's take is druggier than the balls-out Steppenwolf hit, a slippery psychedelic tone without the dramatic dynamics and steamroller rhythm. It's still an upbeat rocker with twisting fuzz guitar leads, but Bonfire's vocals suggest a college kid dropping acid at a house party, while John Kay makes the same lyric into a threat. Bonfire didn't possess the macho bombast of his ex-bandmates; his self-titled debut is a lost masterpiece of introspective psych-pop full of great tunes.

The lead track, "Ride With Me, Baby" lays out everything on his mind with a groovy, dirty, Sunset Strip vibe. Bonfire manages to get out lines like "the beautiful thing has fallen thru with cancer, death, deformity" without sounding clumsy, and he catalogs his worries, woes, and hopes over six minutes of overdriven organ and guitar. "Night Time's for You" is another great rocker, a rather sinister celebration of the dark, while "Sad Eyes" and "Christina's Arms" are sweeter pop numbers.

Even at his most sensitive, Bonfire never drifts into the ether, keeping things grounded in hard rock instrumentation, so that even ballads like "Tenderness" and "How Much Older Will We Grow?" are loud, full-band affairs. Bonfire's talent as a songwriter was obvious to Steppenwolf, as they would go on to raid this album for a full four songs over the course of their career ("Tenderness," "Ride With Me, Baby," and "The Night Time's for You" all appeared on For Ladies Only).

This debut was repackaged a year later with a different track order as Faster Than the Speed of Life, but Bonfire was unable to net any hits of his own, and he retreated into private life.
by Fred Beldin

There are several reasons why the name of Mars Bonfire should be regarded as quite an important entry in every rock’n’roll related encyclopedia, and while being as good as any itself, none of these reasons happen to be his own LP, originally released on the Uni label in 1968, soon to be re-issued on Columbia.

Before actually starting the “bonfire” of his career, along with, among others, Bruce Palmer (soon to join another fellow Canadian in forming Buffalo Springfield), Mars joined Jack London & The Sparrows as Dennis Edmonton. With German émigré, John Kay, replacing their front man, and shortening the name into The Sparrow, the band relocated to New York, releasing a couple of singles, with Mars’ own Tomorrow’s Ship / Isn’t It Strange these days being considered for a minor psychedelic classic.

After yet another move, onto an even hipper coast, the disillusioned Dennis Edmonton, finally becomes Mars Bonfire, while leaving some of his own songs behind, most notably Born To Be Wild, helping his former bandmates reach the long desired heights “faster than the speed of life”, and under a different moniker of another, more appropriate beast ….. without himself present, ironically enough.

Being too tempting to avoid, I suppose Mars just couldn’t help but “cover” his defining number himself, somewhat lacking a ball or two in delivery, compared to the “original”, and it’s a pretty similar kind of a groove that he explores in a more sophisticated way for the album’s title track.

In spite of it not being suggested so, most of the album falls into a lighter, occasionally slightlydelic sound, as heard in Sad Eyes, Lady Moon Walker, She, So Alive With Love or How Much Older Will We Grow?, with the latter being a great Beatle-ish Britsike ballad.

Sometimes he even gets down the folky country round (Tenderness), and on a couple of bluesier tracks, the fragility of the vocal delivery seems to place him somewhere halfway between the Al Wilson-fronted Canned Heat and the Mickey Dolenz-fronted Monkees (Ride With Me Baby, Night Time’s For You).

No less than three more tracks from Faster … were covered by Steppenwolf in 1971, making the legacy of their former bandmate an inexhaustible source, which he hasn’t seemed to be able to take advantage of himself.
by Garwood Pickjon 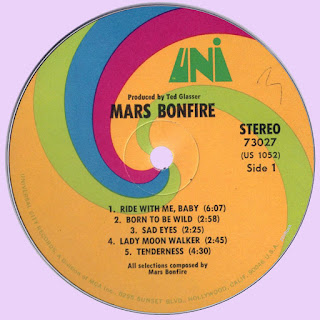 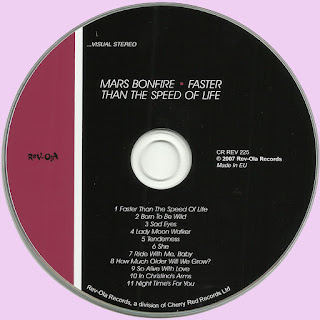