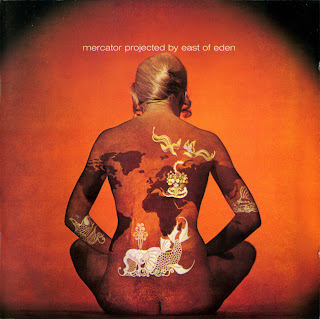 East of Eden was a British band that existed in the late 1960s and early 1970s, and released a handful of albums. 1969's Mercator Projected is their first offering, and also regarded as their best. This album was originally released on Deram Records, the same label that gave us the Moody Blues.

The band didn't have a steady lineup, but on this album, the group consisted of violinist and flutist Dave Arbus, saxist Ron Caines, guitarist and vocalist Geoff Richardson, bassist Steve York and drummer Dave LaFont. Dave Arbus happened to be the same guy who played violin on The Who's classic "Baba O'Reilly" (aka "Teenage Wasteland"), by the way.

The album varies from hard rocking numbers like "Northern Hemisphere" to moody atmospheric numbers like "Bathers", "Waterways", and "Moth". There's also a bluesy number called "Centaur Woman" (sung by Ron Caines), but this is the only weak number on this album, as there's just too much bass noodling from Steve York.

The whole album is a fascinating combination of psych, Middle Eastern influences, early prog rock, and jazz rock. Odd electronic effects are included from time to time, odd use of phasing not unlike the Beatles' "I Am the Walrus", and some jams that sound like they belong on a Soft Machine album.

The old LP features photos of the band members all dressed in Egyptian garb and makeup on the back. The album had been reissued on CD on Repertoire Records in Germany, Si-Wan Records in Korea, and some Japenese reissues as well, so if you can't find the LP or you no longer have a turntable, then you can find the CD reissue online or at your finer record stores that carries better imports (that is, the record stores ran by music enthusiasts, which are becoming quite rare these days, at least in America).
by Ben Miler 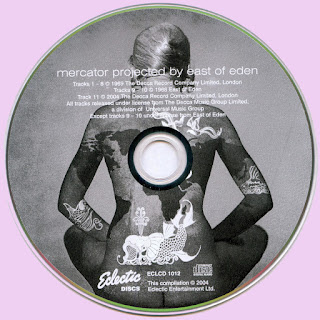 Free Text
Text Bin
Posted by Marios at 7:08 AM 4 comments: