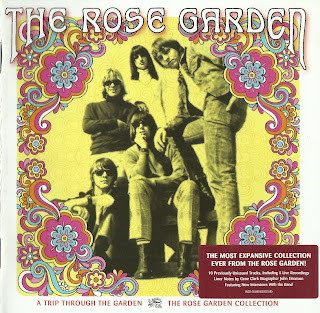 A Trip Through The Garden, a first-time Rose Garden anthology, is a companion piece to the Clark release and, as such, it illuminates the relationship and tells the band’s story.

A Trip Through The Garden includes the ten tracks from The Rose Garden, the band’s non-album A- and B-sides, previously unheard studio recordings, demos, live tracks and a band rehearsal of “Till Today” which was, extraordinarily, taped in Noreen’s bedroom with Gene Clark.

In the liner notes, The Rose Garden is described as “steeped in jingle-jangle Byrdsy folk rock (done well but arguably passé by 1968) and lush folk-inspired vocal harmonies” which nails it. The band were not writers – though they took arrangement credits for the folk songs “Flower Town” (their rewrite of “Portland Town”) and “Rider”.

The Rose Garden hangs together and is a prime example of West Coast pop of the period. Nonetheless it was, indeed, a little behind the times. A fair guess for a release date made after hearing the album for the first time would be Summer 1967: an assumption supported by the very 1967 song title “Flower Town” and the cover of The Giant Sunflower’s April 1967 single “February Sunshine”. Even so, five decades on it remains a fresh, winning album.

What led up to it being recorded, the deal with Greene and Stone and the contract with ATCO (also The Buffalo Springfield and Sonny & Cher’s label) is detailed. The roots of The Rose Garden lay in the suburbs outside Los Angeles (not West Virginia as has been said elsewhere) and in a band variously named The Marauders, The PF Flyers and the magnificently handled The Blokes: the latter after a line in Herman’s Hermits’ “Mrs. Brown You’ve Got A Lovely Daughter”. Initially, The Beatles were the inspiration, especially the Rickenbacker guitar sound permeating the A Hard Day’s Night album.

Then, The Byrds arrived on the scene and swiftly became The Blokes’ prime influence. A Trip Through The Garden’s live tracks include fine versions of “She Don’t Care About Time” and “So You Want To Be A Rock ’N’ Roll Star”. Playing a late 1966 afternoon show at the Ash Grove venue, they saw the by-then former Byrd Gene Clark at the bar. They did a few Byrds covers, he applauded and was duly invited onto the stage where they ran-through “I’ll Feel A Whole Lot Better” and “‘Eight Miles High” with him. The relationship with Clark did not end there and, ultimately, the band recorded a pair of his post-Byrds songs.

Following their initial encounter with Clark, the all-male, mostly teenage band added singer Diana De Rose, attracted Green and Stone’s attention and changed their name from The Blokes to The Rose Garden. Despite the infrastructure now surrounding them, they had just the one hit. Clark joining them in the studio to help record his compositions, play tambourine and offer advice did not help. Neither did the presence of Neil Young, also there  when they recorded the album (he is not on it). Their strong version of Young’s then-unreleased “Down To The Wire” is heard here for the first time. The end came soon after ATCO divisively credited one of their singles to “The Rose Garden Featuring Diana De Rose.”

Listening to this fine band raises the what-if of whether they might have evolved into a self-determining unit: could they have begun generating their own songs? But the question is moot. The Rose Garden were what they were, and the music they left behind is uniformly great. And, as the hugely enjoyable A Trip Through The Garden amply demonstrates, they were about much more than “Next Plane To London”.
by Kieron Tyler, Sunday, 17 June 2018 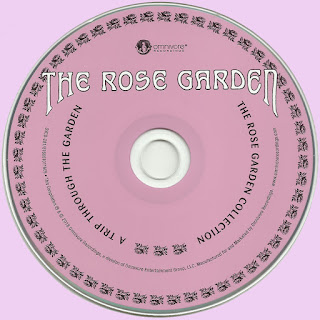