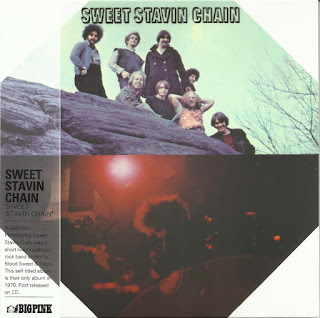 Geez, its amazing how many horn bands seemed to have been given a chance to record in the wake of Blood, Sweat and Tears late- 1960s commercial breakthrough. An eight man outfit, Sweet Stavin Chain were one of Philadelphia's contributions to the wave of late- 1960s/early 1970s horn-bands.

Signed by Atlantic's newly formed Cotillion subsidiary, the band's 1970 debut "Sweet Stavin Chain" was recorded in New York. Produced by Shel Kagan the set's professional, but not exactly boldly original. A mix or originals and cover material, tracks such as Take a Minute' (featuring a kind of cool meltdown guitar fade out), 'I Need Love' and 'I'm Tore Down' are more bluesoriented than BS’n’T, Chicago or other horn band contemporaries.

Lead guitarist Danny Starobin kicks in a couple of nice solos (check out the stinging run on 'I Need Love'), but lead singer John Bussell has a tendency to sing flat. It I had to pick a standout track, then it would probably be their 11 minute plus 'cover of T-Bone Walker's 'Stormy Monday Blues (Call It Stormy Monday'. The song also features a sax solo from King Curtis.
Bad-Cat

Lee Ving (born Lee James Capallero; April 10,1950) is an American musician most known for his role as lead singer and rhythm guitarist for the Los Angeles-based punk rock band Fear, and as an actor. Lee James Capallero was born in Philadelphia, Pennsylvania. In the late 1960s, under the name Lee Ving, he joined Sweet Stavin Chain Blues Band in Philadelphia, playing with Michael Brecker and Eugene Busnar; they played shows with B.B. King, Buddy Guy and Cream among others. Later, Ving moved to New York and formed the band Daybreak. In the mid-1970s, he moved to Los Angeles and in 1977 formed Fear.

Ving has also sung for the band MD.45, which also featured Dave Mustaine of Megadeth and Jimmy DeGrasso of Suicidal Tendencies. However, the 2004 re-release/ remastered record replaced his vocals with Dave Mustaine's. Ving has also sung country music in the outlaw country genre with the band Range War. Prior to Fear, Ving played in a six piece blues act named Easy Love.

Ving and his band Fear appeared in the 1981 rotoscope animated film American Pop, directed by Ralph Bakshi, lead singer Ving acted under the name Lee James Jude. Ving played a lead role ("Missoula") in Penelope Spheeris' 1987 film Dudes. As part of Fear he was featured in Spheeris' 1980 documentary on punk The Decline of Western Civilization.

Furthermore, he played the strip club owner in Flashdance (1983), Mr. Boddy in Clue (1985), and a small role in Streets of Fire (1984), among other roles in film and television. In 1983 he selfdeprecatingly played the over-thetop punk singer named 'Piggy' in the rock-and-roll comedy Get Crazy. In the Who's the Boss episode titled "Walk on the Mild Side", he played Jake Maguire. He also appeared in an episode of the short-lived Three's Company spin-off Three's a Crowd as a criminal in a police lineup.
CD Liner notes 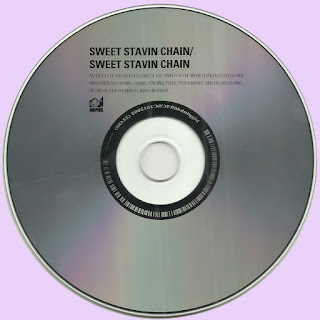 Free Text
the Free Text
Posted by Marios at 4:01 AM 17 comments: