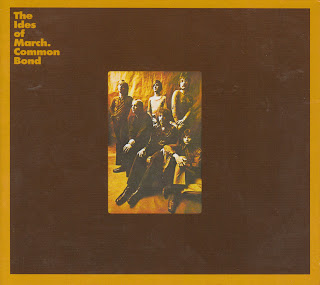 With the 1970 hit single "Vehicle" and the album of the same name, the Ides of March became one of the most popular bands of the era to incorporate soul-oriented horn arrangements into a rock setting, without sacrificing the rich vocal harmonies they'd employed since they began to release records in the mid-1960s. On their 1971 LP Common Bond, the group continued to explore not just brassy rock, but also some of the polished folk-rock harmonies and lengthy progressive workouts they'd flashed from time to time on the Vehicle album. Common Bond, however, would not produce a national hit single on the order of Vehicle, though there are indications they might have had one had one of the tracks in particular been pushed harder.

The story of Common Bond actually begins with the single they recorded as a follow-up to "Vehicle," which had gone all the way up to #2 on the national charts in spring 1970. Initially the band had hopes that "Aire of Good Feeling," a track that wound up on the Vehicle LP, would be the next single. But as lead guitarist, lead singer, and principal songwriter Jim Peterik remembers, "Warner Brothers did not think so. They called our management and said, would you please record another song that's more like 'Vehicle'? That was in the days when follow-ups sounded very similar to the prior one, a la Jackson Five or whatever. So I went to my lab, and I wrote 'Superman.' That kind of became the first song we recorded for the second album.

"We went to the West Coast to record 'Superman.' It was very exciting, because we were now at Sunset Sound, which was like us going to Mecca or something. It was just the holy grail of studios. We were just mesmerized. And sure enough, the sound that came back from those playback speakers was like nothing we had heard. It was so powerful, so punchy. And right in the middle of my vocal take, all the members of the group Chase" -- another group with a horn section, who'd score a big hit single in 1974 with "Get It On" -- "walked in. And then we were all so amped up, because Bill Chase and the whole band were there spurring us. That really set the tone for the second record." Despite fulfilling Warners' request for a made-to-order follow-up, however, "Superman" didn't reach the charts.

Though Common Bond generally stuck to the same approach as the Vehicle album, there were a few changes this time around. The band was slightly reduced in size, from a seven-piece to a six-piece, with the departure of guitarist-bass-singer Ray Herr. They were able to do sessions at RCA Recording in their home base, Chicago, with engineer Brian Christian, who in the early '70s also worked on records by the Guess Who, Alice Cooper, and Poco. "When we heard playbacks, like [for the track] 'Tie-Dye Princess,' we were like totally blown away, and much more happy with the sound than we had been on the first record," enthuses Pederik.

While the album did have some aggressive, horn-fueled soul-rock a la "Vehicle" in cuts like "Superman," "Ogre," and "Giddy-Up Ride Me," there was also some quite different, gentler California-flavored harmony folk-rock, in the mold of Crosby, Stills, and Nash. Foremost among those tracks was "L.A. Goodbye," which became their final chart single, peaking at #73. That modest position doesn't tell the whole story, however, as the single topped the Chicago charts for five weeks -- "the test of a real hit record, to me," asserts Pederik. "Chicago used to be the test market. If it made it in Chicago, it was a pretty good chance it would make it everywhere. Well, it didn't happen. Apparently Warner Brothers was going through a shift in distribution, from being distributed by another major to independent distribution. The story we got [was] that 'L.A. Goodbye' really got lost in the shuffle between distributors."

That doesn't diminish his pride in his track, as Jim continues, "The studio had this Neve console. That created the sound, with the vocal harmonies, for 'L.A. Goodbye,' which of course is really the touchstone of that record in my mind. The vocal blend just was incredible." Adds multi-instrumentalist and fellow Ides of March founder-member Larry Millas, "We triple-tracked the vocals. That was the secret. If you double-tracked them, they were real good. If you triple-tracked them, it was something else. We looked at each other and it was like, 'Alright Carpenters, take that!'"

It's something of a surprise that the same voice responsible for the gravelly blue-eyed soul of "Vehicle" could switch to a much softer tone for folk-rockish material such as "L.A. Goodbye." But Jim Pederik was gifted with a vocal versatility enabling him to walk both sides of that line. "People think I was like a Camel smoker or something," he observes with amusement. "I didn't smoke at all. My voice was able to kind of split its vocal cords a little bit for that rougher sound. Within one album, I could be as clear as a bell, or as gruff as I wanted. It was just part of the way I sang. My dad used to say, 'Jim, you're going to ruin your voice singing that.' I didn't. Not yet, anyway."

Another highlight for the band was the eleven-minute "Tie-Dye Princess," in which the group got to blend several of the styles closest to their hearts -- horn-rock, folk-rock, and elaborate, progressive song construction -- into an extended piece. "Like most songs with the Ides, they start with a germ, usually a song that I bring to the table," is the explanation Jim gives for how such lengthy tracks developed. "Then it gets Ides of March-ized in rehearsal, and it's just what happened with the band. We would be down in Larry's basement, we would learn the basic song, and then we'd jam and jam and jam, and figure out ways to expand it. Sometimes the arrangements even unfolded onstage. We would try a song onstage, and then we would take a section and just interact and go, 'Hey, that was cool. Let's make that a part of the permanent arrangement.' That's how most of our arrangements developed, kind of organically, actually."

Although the Vehicle LP had made the middle of the top hundred of the album charts, Common Bond missed the listings altogether. "The record company was not real supportive of diversity," feels Millas. "They wanted it to be one thing. Like, 'Be that, just do that.' And we were doing all kinds of music on our albums. So it kind of made the marketing a little confused for them."

Despite its lack of chart success, the Ides of March found reasons to be pleased with the music on the record. "I think what I liked most is that we could take the time and our acquired knowledge up to that point, and come up with something as satisfying as 'L.A. Goodbye,'" states Millas. "That record is kind of a quintessential pop-folk, really well-done single, and I'm really proud of that." Adds Peterik, "It's probably got some of the high points, and maybe the one low point of my memory. The high point is, like Larry said, 'L.A. Goodbye.' 'Tie-Dye Princess,' to me, that stands, [despite] a couple lyrics that I wish weren't in there. But overall, it's a nice piece. But when I get interviewed, people say, 'What is the worst song you ever wrote?' I usually say, 'Ogre.' It's horrible. It's just a bad song."

Common Bond was the second and final Ides of March LP for Warner Brothers, the band departing for RCA soon afterward. After a couple more albums, they broke up at the end of 1973. Peterik went on to more commercial success as part of Survivor, as well as writing or co-writing hits for .38 Special. For the past 15 years, he's also been playing with a reunited Ides of March, who, remarkably, still include all six members who played on Common Bond.

As Larry says, "We're still the Ides of March, and we're taking Jim's song seeds and working on 'em." Picks up Jim: "And doing the same thing we always did. We're just having a ball doing it. We always look to those times, especially those first two albums, for inspiration. Trying to take what's good about those, and keep expanding that. I really think, no matter what the diversity is, there is an Ides of March sound. It doesn't have to do, necessarily, with the brass -- 'Is there brass in the song? Is there harmony?' It's a spirit. It's very positive music. We don't dwell on the negative stuff. That's the kind of people we are, and that's the kind of band we are. That's kind of been the common thread."
by Richie Unterberger 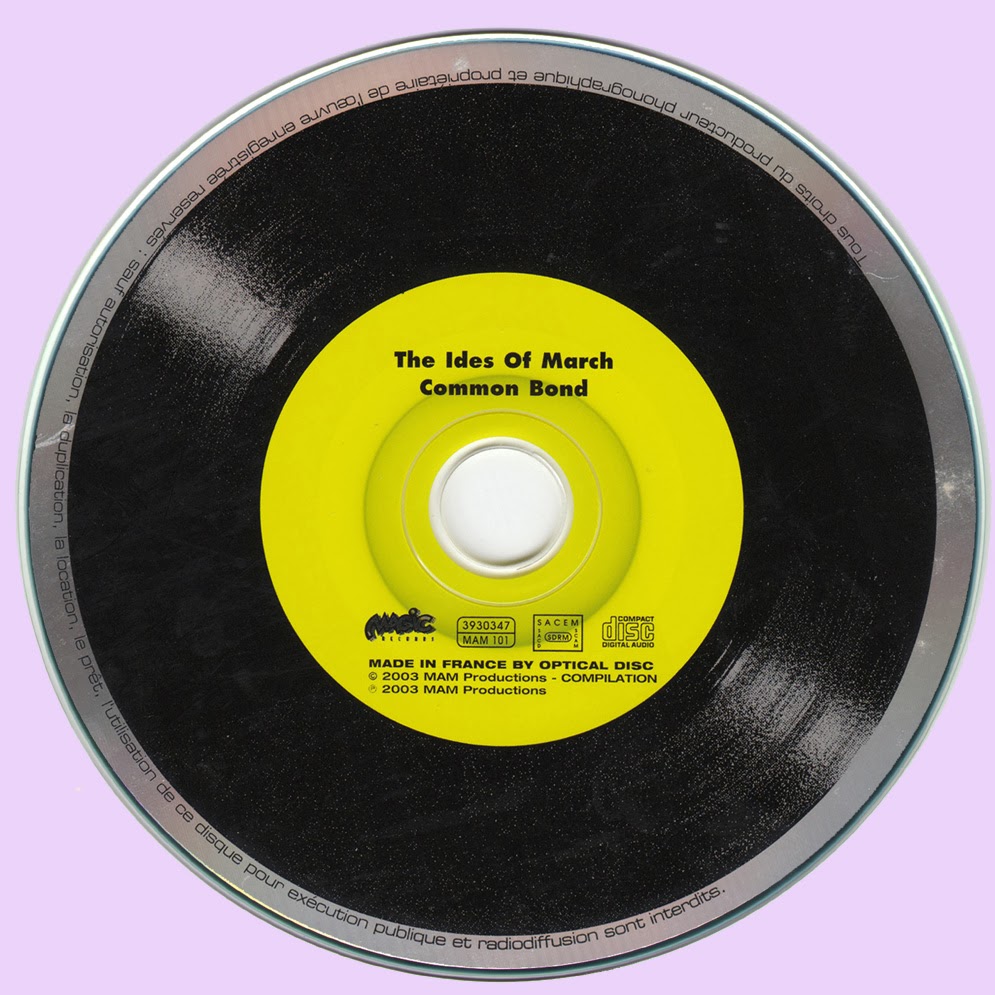