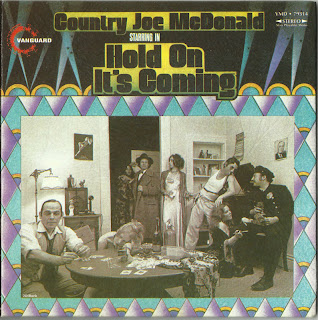 In the Summer of 1970 Joe toured England and Scandinavia playing at the Bath and Bickershaw Festivals. Both were huge successes and we decided to stay in London and record some of the new songs that Joe had been writing. We booked De Lane Lea studio for a couple of weeks and started trying to find people we knew to play on the record.

Eventually we wound up with among others Peter Green and Danny Thompson and two songs Spencer Davis. Unfortunately we had a lot of problems once we got the tapes back to California. We had to go back into the studio and add some new drums-Chicken Hirsh from the Fish; and on "Hold On It's Coming II"; Greg Dewey and Ed Bogas on violin.

This album features a different style of songwriting than the 5 Country Joe and The Fish albums—it's more political—more to the point6 ("Mr. Big Pig" more topical)—("Air Algiers"). Joe spent some time in the South of France, and went to Algiers to see if he could find Eldrige Cleaver an important member of the Black Panther Party who had fled the USA to avoid being arrested. —He didn't run into him. The title song "Hold On it's Coming " was subject to much controversy in the press.

Many critics thought the hitchhiker was a reference to Christ—Joe won't say; and many different allusions about the song and it's meaning (if any) showed up in the press from time to time. The album itself got great radio play, but was confiusing to stores and buyers because of the cover. Many thought it was the soundtrack to a movie—since there was no movie, the records wasn't adequately stocked. Goes to show what art can sometimes do to an album release.
by Bill Belmont, Berkeley, June 2001 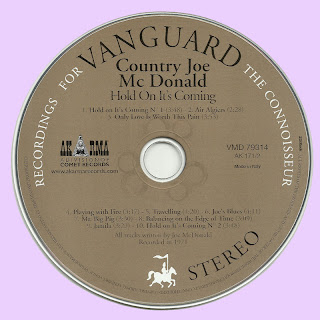