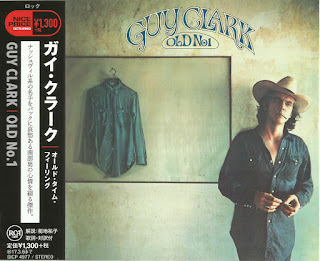 Guy Clark waited a long time to get himself on record, despite a proven pedigree as a songwriter penning sometimes joyous, sometimes bittersweet, frequently autobiographical, always poetic narratives of Western life. Jerry Jeff Walker had cut Clark’s “L.A. Freeway” and “Desperadoes Waiting For A Train” for his eponymous 1972 album, whilst Townes Van Zandt included “Don’t Let The Sunshine Fool Ya” on his sublime The Late Great Townes Van Zandt the same year. Meanwhile, Monahans, TX, native Clark had held down a day job as a TV station art director in Houston whilst playing the city’s folk clubs with the likes of Townes and K.T. Oslin, and, during a brief unhappy spell in Los Angeles, worked as a staff songwriter for Sunbury Music and as a luthier building Dobros. It wasn’t until several years after he moved to Nashville that he finally signed to RCA and released his own first album in 1975, effectively “covering” some of his own tunes that others had put down years earlier.

Under his RCA contract Clark turned out two country-meets-folk albums of such homely, unassuming beauty that it’s amazing in retrospect to think it took him so long to find his own voice on vinyl. On the first, Old No. 1 , Clark’s own belated versions of “Desperadoes” and “Freeway” proved peerless, and other future classics such as “Texas 1947”, “Let Him Roll” and “A Nickel For The Fiddler” rounded out a faultless ten-track set taking in folk, bluegrass, honky-tonk and the most lonesome of torch ballads in a respectful, authentic fashion that contrasted with both the bland country-pop of Chet Atkins’s Nashville roster and the hyperactive rawk’n’roll of Waylon Jennings’s Outlaw clique.

None of which, sadly, provided Clark with a hit; there were no singles released and the album itself struggled only to a lowly 41 on the Billboard country chart. The next year’s follow-up Texas Cookin’ similarly made no commercial impact despite being of nearly as high a quality and including such wonderful waxings as “Virginia’s Real”, “Don’t Let The Sunshine Fool Ya” and the incomparable “The Last Gunfighter Ballad”, and that did it for Clark’s RCA contract.

It would be another two years before he resurfaced on Warner for his third long-player, since when he’s put out infrequent albums on that and no fewer than seven other imprints with no-better-than-modest sales all the way. Yet his songs have been repeatedly covered by country royalty: Johnny Cash, Emmylou Harris, Ricky Skaggs, Vince Gill, Brad Paisley, Rodney Crowell, Alan Jackson, Bobby Bare, Jimmy Buffett and the Highwaymen. In 2011 a slew of the aforementioned plus Steve Earle, Joe Ely, Roseanne Cash, Willie Nelson, Kris Kristofferson, Ron Sexsmith, Townes’s son John and others returned the compliment with a double CD of Clark’s best known tunes entitled This One’s For Him: A Tribute To Guy Clark. Rarely has such a tribute been so genuinely justified, but if this sounds just too gratulatory, treat yourself instead to the twofer CD containing Old No. 1 and Texas Cookin’.
by Len Liechti

Guy Clark died in Nashville on May 17th, 2016, following a lengthy battle with lymphoma. 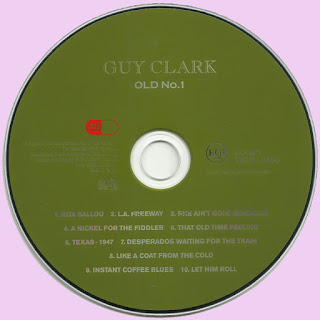 Free Text
Text Bin
Posted by Marios at 8:24 AM 4 comments: