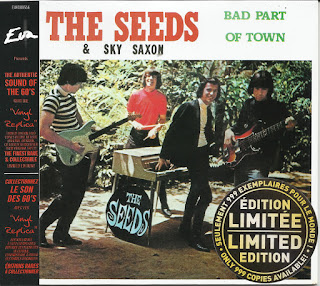 1965, in the heat of the nights of San Francisco and Los Angeles, the rock-rhythm and blues changes itself into psychedelism. Towards Jefferson Airplane and Arthur Lee's Love, the Seeds appear then as the major group of this Weil Coast musical revolution. The Seeds leaded by Sty Saxon arc from Los Angeles He has already tried to become famous in the music business by recording a first 45 RPM under his real name Richie Marsh and the Hood winks rock'n'roll style, before to begin again with two other singles.
The second, is released under the pseudonym of Sky Sawn and the Soul Rockers, more rhythm 'n' blues, sounds 63-64 like with female vocals, and the third is released under the name of Sky Saxon and the Electra Fires. These six tracks "Baby, baby, baby" /-Half angel" "Go ahead and cry" / -They say" and "Do the swim" / -Trouble with my baby", are on the side one of this LP.
In 1965 the Seeds are composed by Sky Saxon (lead vocal, bass), Daryi Hooper (keyboards), Jan Savage (guitar) and Rick Andridge (drums}. They, immediately bring out several hits like "Can't seem to make you mine". "No escape", "Ptishin' too hard" "Mr fanner" "Up in her room". These songs are some great West Coast punk rock classics. In 1967 psychedelism and flower power arc the must. The Seeds bring out their third IP "Future" before returning to the blues under the name of Sky Saxon Band (with a little help from Muddy Waters) and released a last live LP.
The fury of the group on stage is so great that with the Seeds, the L.A. clubs become as wild as the ballrooms of the Detroit scene. In 1969 during a concert in the Santa Monica Civic Center where they jam with Neil Young they perform a killing cover of "Pushin’ too hard". Nevertheless before their split, The Seeds has recorded some promo tracks worth their best classics. So with "Bad par! of town" which opens the side one, and "Did he die", -Love in a summer basket", "Wish me up", "Shucking" and jiving" and "You took me by surprise" on the side two.
Like many other US bands from the golden era of the punk psychedelism (1964-69). we must wait until 1972 with the "Nuggets" compilation to discover again the Seeds, with Mouse and the Traps, the Chocolate Watchband, the Remains and many more. Then in 1977 the best of Seeds "Falling of the edge" is released with the collaboration of Kim Fowley. With the LP "Bad part of town" you possess the seventh album of the Seeds. It fits totally with the six previous albums and is the result of a careful and patient search in the land of the collectors.
CD Liner Notes 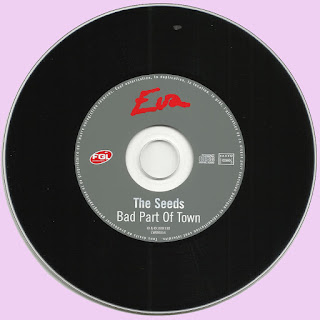