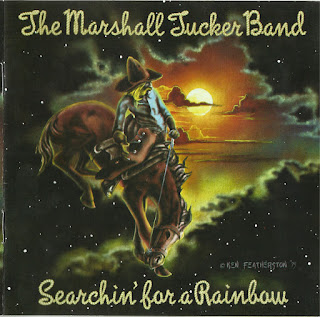 Old West dreams meet Southern memories in the tracks of Searchin' for a Rainbow, The Marshall Tucker Band's fourth album. Released in 1975, this song collection found the group refining its multifaceted sound into an appealing country rock essence. Still present were the jazz and blues-based elements that had always made Marshall Tucker a distinctive unit. By dressing up their music in Western garb, the band found a way to reach a huge new audience-all it took was a little "Fire On The Mountain" to light the way. "We'd found a bit more direction on how to design songs for a record," says lead singer Doug Gray. "Our record company Capricorn had always said, 'Try to give us something that would work on the radio.' We tried to do that, and at the same time please each other. We were known as a jamming band. This was the first time we really tried to give them Marshall Tucker's interpretation of what a hit song  was."

Some three years of near-constant touring and steady recording brought the  band to this point. Formed in Spartanburg, SC in 1972, the group united lead guitarist Toy Caldwell, vocalist Doug Gray, bassist Tommy Caldwell, rhythm guitarist George McCorkle, drummer Paul Riddle and reed player Jerry Eubanks in a unique musical partnership. Named for a local piano tuner, the band established itself on the road (often sharing the bill with the Allman Brothers) as a formidable live act. Marshall Tucker's compelling mix of rock, country, blues and jazz set them apart from their peers and ensured them a rabid following in the Southern States and beyond.

At the core of the band's sound was Toy Caldwell's guitar virtuosity and heart felt way with a song. By all accounts, he was constantly working on his music. "Toy was a compulsive songwriter," Paul Riddle says. "At times, music would just pour out of him. I remember one time we were on the road-Toy had just written a verse for 'Searchin' For A Rainbow.' We stopped at a truck stop and I went in to get him a cheese sandwich. By the time I came back, he had the tune finished in less than 10 minutes. It was amazing."

Toy's growing skill on the pedal steel guitar was a factor in the band's move towards a more countrified approach. He developed a jazz-influenced style that was a cut above the typical twanging sounds most players coaxed out of the instrument. "I think it was a challenge for him," says Doug. "The first night he got his pedal steel guitar in Atlanta, he sat there playing it for two or three hours before we started our show. He really developed his own way of playing it."

Searchin' for a Rainbow also reflected The Marshall Tucker Band's growing acceptance among mainstream country musicians. Waylon Jennings, for instance, went on to score a hit single on the country charts with a cover of "Can't You See," a track from the band's first album. Hank Williams, Jr. performed with them at shows in Birmingham. Some in the Nashville music establishment still thought Marshall Tucker was too rock 'n' roll to fit into country radio formats. Eventually, though, hit-makers like Alabama lead singer Randy Owens would acknowledge the group as a key influence. Helping to spur things on was "Fire On The Mountain," the lead track off Searchin' for a Rainbow. Released as a single in the fall of 75, the tune reached #38 on the pop charts. A vivid, Old West, lyric-storyline combined with bluegrass tinged instrumental licks and an ear-grabbing chorus brought Marshall Tucker its first Top 40 hit.

"Fire On The Mountain" was written by George McCorkle, his first composition to be recorded by the band. Doug remembers seeing its potential from the start: "George called me over and had me sing a little bit of it. I said “Man th is going to be a great song.'" Coincidentally, Charlie Daniels (who contributed fiddle to numerous Marshall Tucker albums, including Searchin' for a Rainbow) released an album by the same name around this time, causing a degree of confusion. Before "Fire ...," Marshall Tucker had primarily been heard on FM radio. The song served to introduce the band to a whole new crowd of listeners. Doug says, "At first, we just had the cool people coming to our shows. Then all of a sudden, we had this hit and these teenyboppers started coming out to see us. I remember all these young guys who were sporting cowboy hats and boots—it was a whole new world for them. We noticed that we were drawing a younger crowd, and we started playing more venues that people under 21 could come to." Those new fans who picked up Searchin' for a Rainbow discovered that Marshall Tucker was much more than a singles band. The album ranks among the group's best work, sonically rooted in Southern traditional styles while displaying an individual edge

As with previous albums, Toy Caldwell contributed most of the songs. Lyrically, he delves into Western scenarios in "Virginia" and the title track, contrasting the hunger for gold with the need for faithful love. The pleasures of Southern country life are celebrated in "Bob Away My Blues," while "Bound And Determined" is a bluesy look at a troubled romance. Musically, the album stretches from old-time country to steamy R’n’B and toe-tapping jazz. Toy's pedal steel playing swoops and swoons on "Bob Away My Blues" (invoking memories of Bob Wills and his Texas Playboys) and adds a gentle caress to "Keeps Me From All Wrong" (written by brother Tommy). Doug proves his vocalist mettle throughout, veering from honky-tonk testifying to blues belting as the songs require. Jerry Eubanks particularly shines on "Walkin" And Talkin'," a joyfully swinging number. Several guest players are worthy of note. Allman Brothers guitarist Dickie Betts and keyboardist Chuck Leavell contribute their signature touches to the title track and "Bound And Determined," respectively. As on earlier Marshall Tucker albums, producer Paul Hornsby adds dashes of New Orleans piano and gospel-drenched organ here and there.

Rounding out Searchin' ... is a live recording of "Can't You See," taken from a July 1974 show in Milwaukee. This smoldering treatment of the tune-first heard in studio form on the group's debut album-reaffirms Marshall Tucker's status as one of rock's premier jam bands. There's a wrinkle in his playing, Paul Riddle points out: "Listen to the intro-the song is in half-time, but something compelled me to play the first eight beats in double time. Tommy got so tickled, I swear we were about to stop the song. It's an absolute hoot!" Searchin' for a Rainbow brought the band another gold album and eventually 'went platinum as well. "Fire On The Mountain" helped pave the way for even greater success on radio with the 1977 hit "Heard It In A Love Song." Enduring personal tragedy and weathering line-up changes, The Marshall Tucker Band has continued on into the present day. Their creative fires continue to burn bright.
by Barry Alfonso 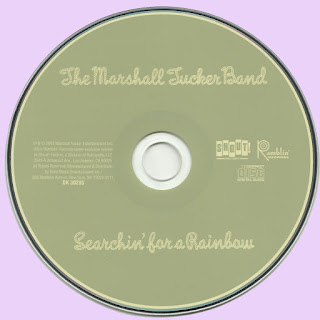 Free Text
Text Host
Posted by Marios at 11:51 AM 5 comments: