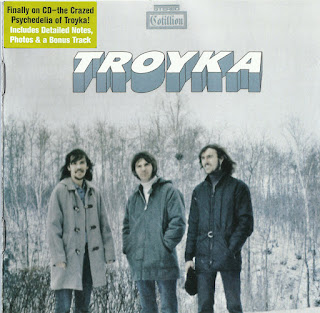 This Edmonton power trio combine some frenetic post-Cream guitar thrills with gruff, hyper-macho vocals on their one and only LP. The lads - Edmontonians Robert Edwards, Michael Richards, and Ron Lukawitski - actually trekked as a quartet to Montreal in 1966 but, after losing their drummer to personal family issues, regrouped back in Alberta. There, in a rather deft homage to their shared Eastern European heritage, they dubbed themselves Troyka though whether their namesake was a powerful triumvirate or an antiquated three-horse cliche has certainly blurred with the passage of time.

Troyka even comes speckled with Slavic elements two tack-on instrumentals, the lilting 'Introduction' and the closer 'Troyka Finale', bookend the record, but for the most part it relies on crotch-heavy amplification to counter the relative paucity of ideas here. 'Natural', for instance, sports some prime virtuosic guitar work, though the constipated vocals reek of facile sexism - as if an axe and some fine chops weren't enough to get you laid without pubescent posturing like, "Hey mama, won't you come down by the river, and give me some". 'Rolling Down the Road', with its nearly proto-speed metal, fares much better, channelling frantic hyper blues into an almost MC5-like abandon. Other tracks hint at a more delicate side, especially the wistful soft-psych instrumental 'Dear Margaret Malagosia', with its Spanish tinges and flecks of John Williams-ish guitar.

Troyka's flaws aside, the guys were often hailed for their legendary live sets - one particularly raucous set at New York's Fillmore East saw them flagged back for a triple encore. By 1970 they seemed to be hitting their stride, scoring a coveted support slot in Toronto for the mother of all troikas, Leslie West's Mountain. But alas, while poised to secure a page in history alongside the Band, the Grateful Dead and Janis Joplin aboard the infamous bourbon-and-barbiturate-laced Festival Express cross-Canada train tour in the summer of 1970, guitarist Rob Edwards left to tend to family concerns and, thus, fame turned to footnote for Troyka.
by Michael Panontin 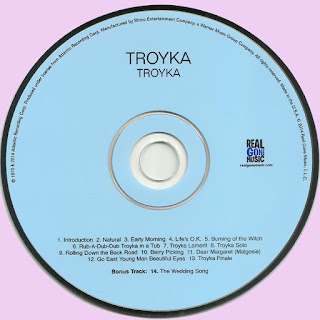 Free Text
Text Host
Posted by Marios at 8:05 AM 6 comments: