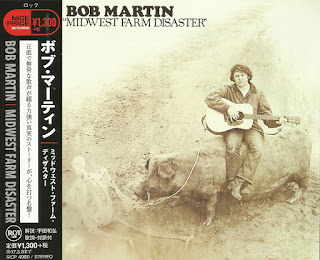 Bob Martin is a highly talented singer songwriter from Lowell, Massachusetts who released Midwest Farm Disaster in 1972. Martin is still making records today but this one is generally acknowledged as his masterpiece and is perhaps one of the finest singer songwriter albums ever recorded.

Martin’s voice is gravelly and weathered but soulful. Think of a strange Kevin Coyne, Van Morrison, and Bob Lind blend and you’d be right on target. The lyrics are top shelf too, the equal or better of most major or critically acclaimed artists out there. The album’s sound is very close to Gene Clark’s White Light or Bob Lind’s Since There Were Circles LP, a stark, beautiful blend of folk and country that reveals its depth with repeated listens. Each song has something new to offer, and Bob brings us into his working class world with great American stories about local drunks, small town farm life, hard times, prison convicts, and working on the mill.

“Blind Marie” is a moving singer songwriter track that sounds like a classic, it also happens to be the album’s most accessible song that should have gained Martin commercial notoriety. Tracks like the Woody Guthrie influenced “Third War Rag” and “Frog Dick, South Dakota” are coloured by a distinct sense of humor but are also packed with good, catchy melodies and wonderfully sarcastic lyrics. Other songs like the intense “Mill Town” and the title track are dark tales that relate to Bob’s earlier life on the farm and are superb examples of real Americana. The album ends with “Deer Island Prison,” which might be thought of as the album’s centerpiece. Martin turns in a stunning vocal and lyrical performance that must surely rank as one of the great, unsung confessionals.

This is an excellent and unforgettable LP full of rich drifter music and mandatory listening for those who are into deep, rustic singer songwriter albums.
by Jason Nardelli 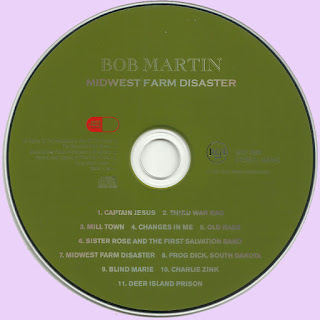 Free Text
the Free Text
Posted by Marios at 9:18 AM 9 comments: