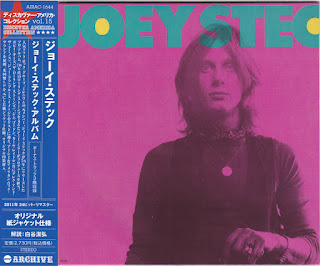 Joey Stec will be a familiar name to fans of The Millennium, a Southern California group who were the brainchild of producers' Gary Usher and Curt Boettcher, and Keith Olsen. The group's album, Begin (Columbia 1968) is an obscure classic of the period, as well as being one of the most expensive albums recorded by Columbia at the time. Joey Stec was one of the main members of that band, and his own self-titled album is, in its own way, a classic of the period that it was done in as well.
Released in 1975, The Joey Stec Album is loaded with great pop-rock hooks ("Do You Know"), introspective ballads ("No Knowing," which recalls Neil Young's work from this period) and delightful, joyous singing, songs and performances. Unlike many records like this from the mid-70's, this album actually has retained its freshness, and that alone is an incredible feat. Masterfully produced by the great Jimmy Miller (Traffic, Rolling Stones, etc.), the album features stellar guest performances by such heavyweights as Bobby Keys, Jim Gordon, Cale Radle and others. In fact, this album can accurately be described as a poppier version of The Dominos, crossed with the Beatle-esque pop sensibilities of groups as Badfinger and Big Star. Mostly, though, it sounds like Joey Stec, which is a wonderful thing in itself. Absolutely delicious.
by Matthew Greenwald 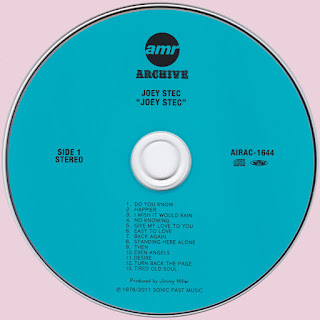 Free Text
Just Paste
Posted by Marios at 5:18 AM 4 comments: