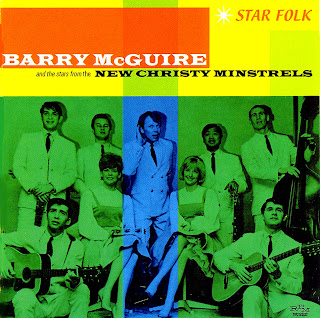 McGuire is of course well known for scoring with an international no.1 hit, Eve Of Destruction. Prior to this, his grounding had been as a member of the New Christy Minstrels since they began in 1962, a vocal/instrumental ensemble whose line up at times included Gene Clark and Kim Carnes. McGuire sang lead on their US hits ‘Green Green’ and ‘Saturday Night’.

The recordings on this album were made for the Horizon label in 1963. A short-lived American Folk label whose most prominent artist at the time was Hoyt Axton. McGuire recorded a number of tracks for the label in the company of Karen Gunderson , Art Podell, Paul Potash, Barry Kane, all also members of the New Christy Minstrels. These were collected together as Star Folk volumes 1 and 2 . (A further two volumes were released later but featured different singers.) The material is for the most part originals by McGuire and his contemporaries such as Hoyt Axton, Art Podell, Rod McKuen.

As the LPs became old news in the American catalogues, they were given a new lease of life by Ember Records in the UK in 1965 ; not coincidentally at the time that McGuire hit big with Eve of Destruction. Ember even released a single, McGuire's raw vocal version of the Kingston Trio hit Greenback Dollar. However these classic American Folk recordings have not been available since, and they include standouts such as Greenback Dollar (Axton/Ramsey) , Oh Miss Mary (Stewart / Phillips), Another Country (McGuire/McKuen) ,So Long, Stay Well (McKuen).
Cherry-Red 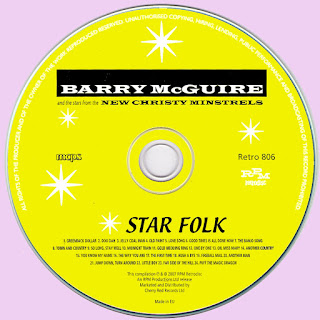 Free Text
Text Host
Posted by Marios at 7:59 AM 9 comments: