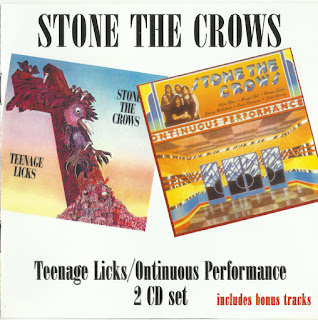 Scottish blue rock act Stone the Crows were dealt more than a few blows as they attempted to record their third album in 1971. Bassist/vocalist James Dewar had jumped ship to be the sole vocalist in Robin Trower's band, and keyboard player John McGinnis had enough of life on the road and became a teacher. This left vocalist Maggie Bell, guitarist Leslie Harvey, and drummer Collen Allen to look for replacements, and in came bassist Steve Thompson and keyboard player Ronnie Leahy. With Maggie now as the main focal point from a vocal perspective, the sound of the band changed slightly, and things got even more dicey when Harvey was electrocuted on stage in 1972, before the band had even finished their soon to be fourth album. In would come ex-Thunderclap Newman (and soon to be Wings) guitarist Jimmy McCulloch. However, things were never the same, and the band split soon afterwards with four albums in just over two years. This 2CD Angel Air Records set collects the two long out of print albums Teenage Licks and Ontinuous Performance, and while they are perhaps not quite as impressive as the band's first two releases, they are still prime examples of fiery early '70s blues rock.

Teenage Licks features a host of hot tunes, including the smoldering rocker "Mr Wizard", the slow blues piece "Don't Think Twice" (featuring an emotional, Janis Joplin styled vocal from Bell), the heavy rocker "Big Jim Salter", and Harvey's sizzling hard rock licks on the raucous "Keep On Rollin' ". A blistering live "Let It Down", originally written by the first incarnation of the band, is an outstanding bonus surprise here. Leahy contributes more piano on Teenage Licks than we saw on the first two Stone the Crows albums, as opposed to McGinnis' reliance on the Hammond organ, so there is a bit of a different feel here to be sure. With Harvey's death, the band had not completely finished the Ontinuous Performance, so McCulloch put the finishing touches to the songs "Good Time Girl" and "Sunset Cowboy", but Les can still be heard on the crunchy blues rocker "On the Highway", an old school blues number "Penicillin Blues", the upbeat "Niagara", and the atmospheric "King Tut". None of these songs carry the power of anything from Stone the Crows or Ode to John Law, as the band seemed to be going through the motions by this point, delivering solid but unspectacular honky tonk blues. By 1972, it was all over, and Maggie Bell's solo career would begin.

Thanks must be made to Angel Air for making sure these recordings are once again available for fans to either discover for the first time or finally get a CD copy of their old vinyl versions. Though their first albums are the cream of the crop, there's still plenty of exciting blues rock here to enjoy, featuring the amazing skills of one Maggie Bell.
by Pete Pardo 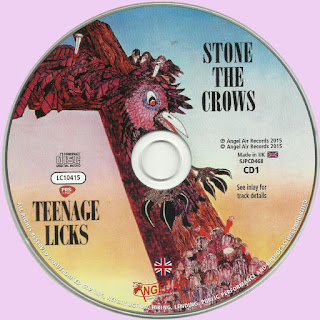 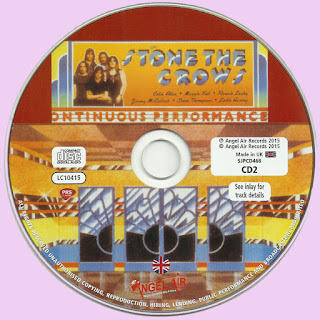 Free Text
Just Paste
Posted by Marios at 8:07 AM 8 comments: