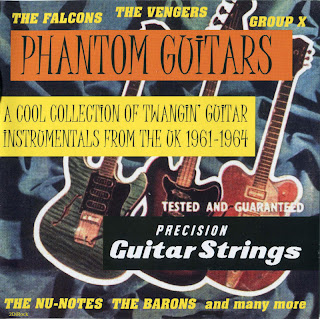 One of England's first noteworthy rock group was the Shadows, and their polished instrumental style, with Hank Marvin's twanging Stratocaster leads way out in front, set a template that a great many U.K. bands would follow until the Beatles and the Rolling Stones upended everything in 1963.

Nick Saloman of the Bevis Frond delivers another enjoyable look back at the history of U.K. pop with Phantom Guitars: A Cool Collection of Twangin' Instrumentals from the UK 1961-1964, which collects 25 rare selections from the days when Duane Eddy, Jorgen Ingmann, and Lonnie Mack were still forces to be reckoned with on the pop charts. If you're looking for startling originality, there's little to be had here, but if you dig ringing single-note leads with plenty of string bending and whammy-bar action, this disc is 56 minutes of aural manna from heaven.

Dennis Newey's "Title Unknown" gets high marks for wit, familiar melodies get a workout on "Temptation" by Bobby Taylor and "Bizet as It Were" by the Players, "Circlorama" from the Champions salutes a little-remembered innovation in motion-picture technology, and the Violents and Group X both deserve to be cited for their remarkably cool names, even if their music didn't quite live up to the billing. As with the lion's share of releases from Saloman's Psychic Circle label, this set includes well-written liner notes that pass along what's known about the artists, and the mastering is good despite these rare recordings being sourced from vinyl discs.

The instrumental rock scene was a vitally important part of the rise of homegrown British rock, and if this deals in obscurities rather than hits, Phantom Guitars documents how pervasive this sound once was, and how many great pickers were making the rounds in the early '60s.
by Mark Deming 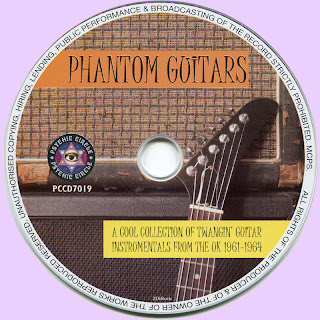 Free Text
Text Host
Posted by Marios at 8:17 AM 7 comments: