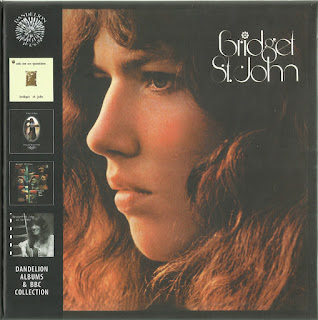 Venerated BBC Radio 1 DJ John Peel once called Bridget St. John “the best lady singer-songwriter in the country.”  So when Peel formed Dandelion Records in 1969, the label’s first signing was St. John; in fact, Peel once commented that “the main reason why we started the label [was] ‘cos nobody else was going to record her stuff.”  Cherry Red Records has just reissued all three of St. John’s moody, evocative Dandelion albums (individually released in 2005 on CD) recorded between 1969 and 1972, together with a bonus disc of the artist’s BBC recordings, in one 4-CD package as The Dandelion Albums and BBC Collection.  It’s nearly one-stop shopping for those hoping to acquaint themselves with fans of this leading light of the English folk revival.

Most of the songs on 1969 debut Ask Me No Questions were penned while St. John was still a student at Sheffield University.  A further testament of his dedication, Peel himself produced the sessions.  (John Peel on Dandelion: “The half-witted, idealistic notion behind Dandelion and our other violent, capitalist enterprise, Biscuit Music, is that any profits, if such there be, should go to the artists, not to [partner] Clive [Selwood] nor myself.” )  John Martyn joined St. John on guitar for the baroque "Curl You Toes" and the title track, while future Fairport Convention member Ric Sanders added guitar to "Lizard-Long-Tongue Boy" and "Many Happy Returns.”  Selwood used his Elektra Records connections to grant St. John’s entirely self-written debut an American release, but despite its hauntingly beautiful sound, it failed to make much of a commercial impression in either the United Kingdom or United States.  Questions has been expanded with two bonus tracks: St. John’s rendition of Leonard Cohen’s “Suzanne” and her own “Passin’ Thru.”  Both tracks are single sides from 1972 and 1973, respectively.

A change in distributors (from CBS to WEA) was just one of the problems facing Dandelion that kept St. John from releasing a second album until 1971.  When Songs for the Gentle Man arrived, however, it was worth the wait.  Produced by Ron Geesin (Pink Floyd’s Atom Heart Mother), it featured another array of beautifully pastoral St. John originals plus covers of John Martyn (“Back to Stay”) and Donovan (“The Pebble and the Man”).  St. John’s husband Nigel Beresford co-wrote “Seagull Sunday.”  Like its predecessor, Songs for the Gentle Man too gained an American release on Elektra.

St. John’s final long-player for Dandelion, Thank You For…, followed in 1972.  This time, Jerry Boys (Steeleye Span, Sandy Denny) was at the helm and the U.K. release on Dandelion was distributed by Polydor.  (The album wasn’t released in America.)  With Thank You, St. John ventured into the realm of folk-rock with more layered arrangements, and covers of songs from a diverse crop of writers including Bob Dylan (“Love Minus Zero – No Limit”) and Buddy Holly (“Every Day”).  Terry Hiscock of the band Hunter Muskett contributed “Silver Coin,” and “Good Baby Goodbye” was written by Beresford. (Hunter Muskett’s lost folk-rock classic Every Time You Move was also reissued by Cherry Red.)  Her raga-rock reinvention of the traditional “Lazarus” also became a fan favorite.  Six months after the release of the album, Dandelion folded, leaving St. John without a label.  Despite St. John receiving regular airtime on the BBC, Thank You was her third album to fail to catch on with the record-buying public.  This disc has been expanded with two single sides (“There’s a Place I Know” and “Passing Thru,” the latter originally released through MCA) and an eight-song set live at Montreux in April 1972.

The box set is rounded out by a 19-track collection of St. John’s BBC recordings for programs such as Top Gear, Night Ride and In Concert between 1968 and 1972.  Among the many highlights of this disc are performances of John Martyn’s “The River” and Joni Mitchell’s “Night in the City.”  Note that sound quality is admittedly variable on this disc; the liner notes indicate with welcome transparency that “the master tapes for the BBC recordings are long lost, and these copies have been taken from the best available sources.”  (Note that additional BBC recordings for St. John were released in 2010 on the Hux label.)

Bridget St. John went on to record a fourth album for Chrysalis Records in 1974.  Though she laid low for decades, she’s returned to performing in recent years and issued a rarities collection, Take the 5ifth, as her fifth proper album.  This compact box set, produced with St. John’s cooperation, includes all four discs in handsome paper sleeves with the first three replicas of the original artwork (although gatefolds are not replicated).  A 12-page book boasts compiler Richard Anderson’s essay as well as copious memorabilia images.  Especially at this bargain price, there’s never been a better way to become acquainted with the music of Bridget St. John.
by Joe Marchese 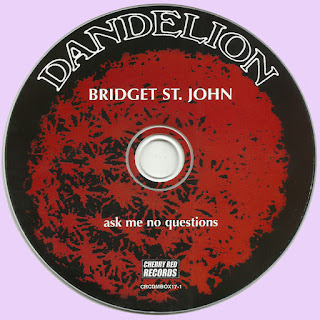 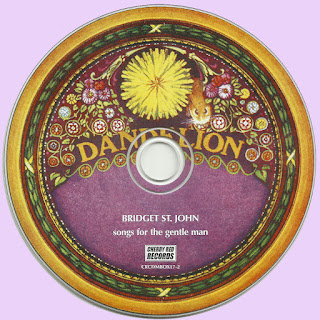 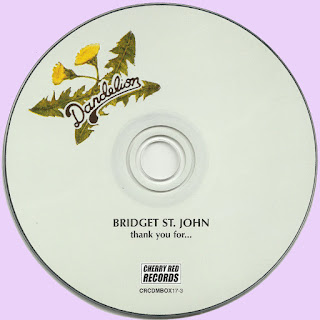 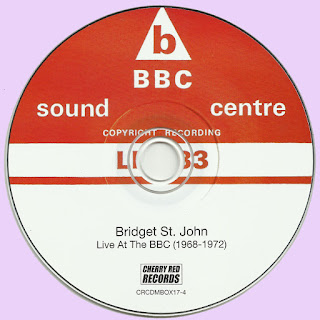