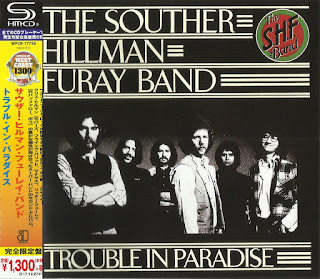 With producer Tom Dowd, known for his work at Atlantic Records, at the helm, the Souther-Hillman-Furay Band seemed to be distancing itself a bit from its country-rock roots with its second release, the appropriately titled Trouble in Paradise. Here the band expands on the funkier aspects of its debut album, while at the same time slipping even closer to the middle of the road. On that record it was former Poco frontman Richie Furay who was responsible for the highlights, but this time out it's J.D. Souther, who penned four of the LP's nine tracks, who leads the way, with "Prisoner in Disguise" (recorded that same year by Linda Ronstadt) and the title cut the standouts.
Still, Furay, whose two compositions were dominated by his recent conversion to Christianity, does connect with the lovely "For Someone I Love," which interestingly enough precedes the sleazy rationalizations of Souther's "Mexico." As was the case with the previous album, Chris Hillman's trio of selections, including "Love and Satisfy," which borrows the lyrics for the majority of its first two verses from his and Gram Parsons' "Train Song," are moderately successful, if in the long run somewhat forgettable.
Before the recording of the album, original drummer Jim Gordon had left and was replaced by Ron Grinel (Souther also played drums on a couple of tracks), and what must have seemed like a great idea in 1973 was showing signs of unraveling. The band was finished by 1976 following Trouble in Paradise's poor showing, with each of its primary members recording solo records for Asylum within the year. Originally released by Asylum Records in 1975 and reissued on CD in 2002 by Wounded Bird.
by Brett Hartenbach 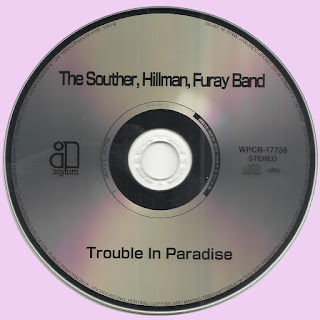