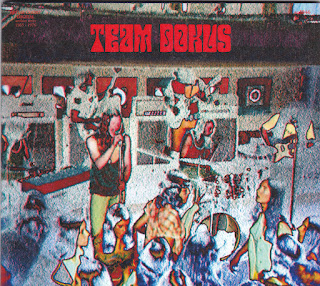 When Blandford Forum resident and vocalist Roger ‘Dokus’ Hope was edged out of local band The Room in favour of Jane Kevern in February 1969, he was approached by former members of The Push, guitarists Stephen Hall and Fred Fry, bassist Terry Lowe and keyboard player Phil Bridle to form their own outfit with eventual drummer Royston ‘Roy’ Stockley. The name they chose for this new band, Team Dokus, was a fusion of Roger’s nickname ‘Dokus’, given to him by Stephen Hall from the TV cartoon character ‘Diplodocus’ and the Formula one racing team Lotus. Managed by Graham Cole of the J. C. Theatrical Agency based in Weymouth, the band honed their repertoire of Black Sabbath, Fleetwood Mac, Deep Purple, Status Quo and Ten Years After covers, plus a smattering of originals, at local venues such as the Chequers Inn in Lytchett Matravers, the Old Harry pub in Poole High Street and the George Hotel, also in Poole.
By 1971, they were making headway on the national college and club circuit and recorded four tracks at Wessex Studios in Highbury New Park, Islington on 15th February. Two of the songs, “Tomorrow May Not Come” and “I Feel Your Fire” turned up years later on their sole album, while “My Name is Death” and “Feel a Little Higher”, have never been released.
Six months later, on 18th September, the band recorded an ambitious concept album with a nuclear holocaust theme set during World War 3 for the miniscule Sphere label, a subsidiary of CBS Records. Sandwiched between dates with Nazareth at The Temple in Wardour Street and Genesis at the Potters Bar Youth Club, the ten songs were hurriedly taped in a matter of hours, leaving no time for overdubs, refinements or corrections. On the day of recording, Terry and Roger were suffering from severe bouts of flu and were promised a chance to return at a later date to re-record their vocal parts, but the opportunity never materialised.
A couple of months later over two Saturdays in October, the band decamped to Regent Sound Studios in Denmark Street to record shorter versions of two songs from the album, “Fifty Million Megaton Sunset” and “Tomorrow May Not Come”, for a single. A small amount were released in London and it was picked up by John Peel who played it on his radio show, but the record never reached the shops nationally.
In 1972, Team Dokus entered the southern area final of the inaugural ‘Melody Maker National Rock and Folk Contest’ (as opposed to the ‘Melody Maker Search’ contest that Roger’s former band Room entered in 1970). Held at the Chelsea Village in Glen Fern Road, they beat off the opposition and progressed to the final held at the Roundhouse in Chalk Farm on Saturday 4th June 1972. The band missed out on a top three places and the chance of a recording contract because they were already signed to Sphere. The blues artist Lloyd Watson came out top in the solo category and the Anglo / American jazz rock outfit Listen was deemed to be the best band, while Team Dokus settled with fourth position. They received a consolation pat on the back from John Peel, plus a brand new Fender bass for Terry Lowe. Later, in 1972, the band broke up and returned to a quiet life in rural Dorset, becoming just another blip in the annals of rock history.
Bournemouth Beat Boom 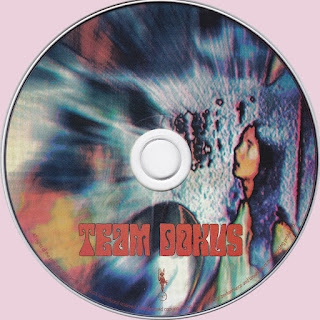