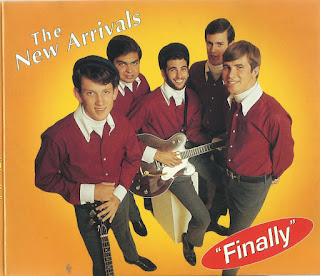 The New Arrivals band was formed in 1962 originally as The Preps from Bellarmine College Preparatory in San Jose California, the home of everyone from The Doobies to Smash Mouth. They started in a garage which was really converted into a family room and by the time 1963 rolled around they had produced a minor instumental hit in the West called PAM PAM distributed by Amy Mala. Then in 1964 they released Ray Peterson's NIGHT THEME on Dot Records and caught the ear of promoter Irving Granz who signed them as a back up band for the tour with the Beach Boys...after hearing them perform with them..our guys first real concert. Actually they opened for the first Beach Boys concert in the Bay Area and debuted their vocal act by singing 3 Beatle songs. As a stunt they wore Beatle wigs which Capitol Records had been giving out to radio stations such as the fabled KLIV promoting the Beatle Invasion. The crowd thought they WERE the Beatles and actually went semi crazy. The band was on its way to becoming a rock-solid vocal group as well as great instrumentalists.

Over the next three years they toured or performed with notables such as Sonny and Cher, Glen Campbell, Paul Revere and The Raiders, The Dave Clark Five, The Beau Brummels, The Righteous Brothers, The Ventures, Jr. Walker and The Allstars, Cannibal and the Headhunters, The Paris Sisters, The Angels, Sam the Sham and the Pharohs, Noel Harrison, Dobie Gray, Timi Yuro, The We Five, The Surfaris, and on and on. Going back to Golden State Recorders they released MOONRACERS by Herb Alpert on Southbay Records in 1965. Then they changed their moniker to The New Arrivals since they had graduated from the fabled Bellarmine "prep" school by this time. In 1965 they released TAKE ME FOR WHAT I AM(which was not available for this CD but can be linked through Let's Bet With It baby on this site}) on Southbay and this marked their debut as a five voice vocal group with influences from many of the people and bands they toured with or accompanied.

At this point they started doing national radio spots and TV commercials for corporations such as Macy's and Seven Up. In 1966 they toured and recorded SCRATCH YOUR NAME on Southbay Records written for them by Tom Talton of WeThe People. Then in early 1967 a big chance came when Mike Post and Reprise Records wanted to sign them. An album had just been completed and there was no stopping their fate. Except within days of the audition three of the five members were drafted. That was it. The band was in limbo. No, the band was disbanded.

During the 70's and 80's they were in and out of the studio trying to create a new sound but never a live performance group.In the late 80's they reunited to back Chuck Berry in what some reveiewers called the best rock 'n roll concerts of all time and played a few stints with The Coasters, Bobby Rydell, Martha and the Vandellas and San Jose's Syndicate of Sound. Until now this album has never been available or heard. In 1984 producer Dick Hanahoe gave the tapes to Tom Muller in hopes something might be done someday. This is the original 4 track mix that has been transfered to digital domain and only edited to make playable for CD. The reverbs, voices, guitars, vox organ and more are the real thing that Leo de gar Kulka engineered. It is as if time has given us the opportunity to listen in on another era with a fresh sound that perhaps will FINALLY be appreciated .
by David Bash 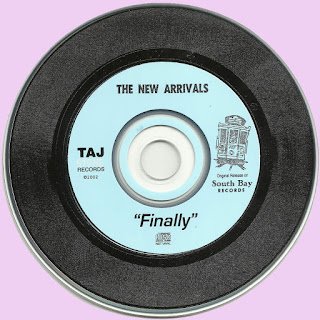 Free Text
the Free Text
Posted by Marios at 7:47 AM 5 comments: