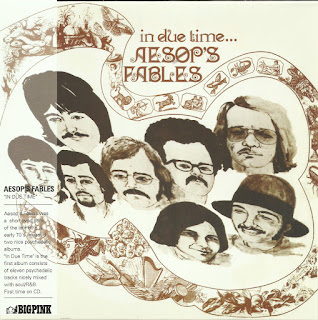 Falling somewhere in the musical spectrum between David Clayton-Thomas and Blood, Sweat and Tears and The Young Rascals,  the short-lived and little known Aesop's Fables deserved a better fate.  Led by singer/songwriter Sonny Bottari, the Long Island-based group was initially signed by ATCO where they released a series of three widely ignored mid-1960s singles.

After the unsuccessful singles ATCO dropped the band, though in a matter of months they rebounded, attracting the attention of the Chess affiliated Cadet Concept label.  Eager to expand its catalog of rock material, Cadet Concept gave the go ahead for an album teaming them with producer/songwriter  Bob () - Robert Gallo for their 1969 label debut "In Due Time".  Sporting two capable vocalists in Sonny Bottari and drummer John Scaduto, the collection aptly demonstrated the octet's enjoyable blend of blue-eyed soul and more experimental horn based outings () - 'Everybody's Talking' and 'Look Out' and 'In the Morning'.

Featuring a mixture of Gallo-penned numbers and band originals, blue-eyed soul moves like 'Lift Up Your Hearts', 'What Is Soul', and The Rascals blue-eyed soul clone 'What Is Love' were quite commercial.  Unfortunately, in the midst of a burgeoning blues and metal scene, the band's easygoing soul moves also seemed slightly out of date; almost like they were a year or two behind popular tastes.  Elsewhere there were a couple of stabs at updating the sound.  Sporting a much harder rock sound 'Spoons Full of Sand' came off as a weird hybrid of  Cream-meets Blood, Sweat and Tears.  Guufy but kind of neat.  Unfortunately the group's lounge lizard cover of the Supremes' 'I'm Gonna Make You Love Me' was simply a boneheaded move.
Bad-cat

Aesop's Fables only released this one album on Chess Record's Cadet Concept imprint and as such it's one of only a couple of real rock records on Cadet Concept. The music is inconsistent and varied in style. A lot of it falls into the brass rock genre popular at the time., Blood Sweat & Tears, Rare Earth, but there are some other tracks that go into blue-eyed soul and psychedelic territory. The band is excellent especially when one or all hit a groove like the organ freak out on "In the Morning" and pretty sublime, psychedelic jamming on "And When It's Over". 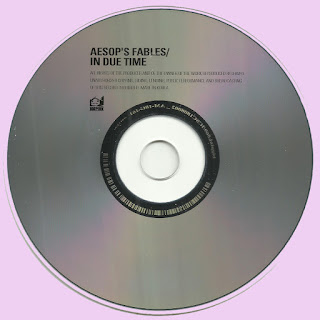