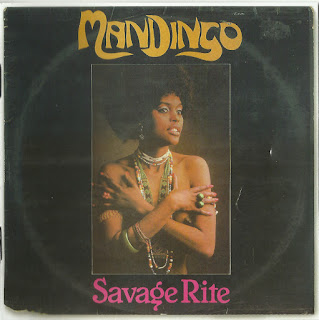 A strange netherworld filled with rattling bongos, slick strings, wall wall-infused rhythms and searing guitar solos. The original sleeve of Mandingo's fourth album, 1977's 'Savage Rite' reveals little. Other than an image of a scantily clad Afro-sporting female looking into the middle distance, there's little to go on. Track names summon up the exotic but apart from an associate producer credit for Gil King and the line "A Supertunes Production for EMI, produced by Norman Newell", there arc no details at all. The reverse sleeve image smoulders and rereading the song titles; 'Jungle Juice', 'Rebellion' and 'Requiem For A Warrior' merely adds to the intrigue. Who was this strange band and where did they come from?

Sought after on vinyl and commanding a heavy price if you can find it, the album is a real oddity. From the opening bars of 'Manhunter' with its filmic strings, pounding bongos and funky rhythm section, it sounds like a lost piece of Afro-beat-inspired disco, a souped-up version of 'Bongolia' with a scorching guitar rolling out around the two-minute mark. Tags on the internet mention all genres and the sleeve suggests some level of authenticity, but the sound is unique, it's not from some long lost tribe, the moves are too well rounded, the riffs too well organized, the sound just too perfect.

'Wild Man" continues the groove with a 'Shaft'-styled wah wah underpinning an almost Bond-esque sound while that guitar tears into proceedings again. Indeed it's that 007 sound that permeates this whole album that makes it so exciting. It's a larger than life drama played out over pounding drums and exotic percussion from vibraslap to maraca, all held together with a pin sharp funk rhythm. A hint of disco, for sure, but this is a big production.

Side one closer 'Requiem For A Warrior' adds tribal African drums, a fistful of electronic swirls and a brass sound that's more Chicago Transit Authority than Fela Kuti. And, side two's opener 'The Man From Takoradi” continues the sleuth-some sound, while 'Jackal' sounds like a backing track from a Motown ballad with layers of jazz funk strangeness unevenly placed on top with more than a nod to David Axelrod.

'Jungle Juice' turns up the heat in a neo-strip erotica fashion and the closing title track sounds like the chase scene from Live And Let Die. There's voodoo in those rhythms and heady funk in the finish. There's flutes, there's odd noises, it has everything.

Before I came across 'Savage Rite', I'd heard Mandingo's 'Black Rite' on the compilation 'The Sounds Of Monsterism Island' a fantasy collection by artist Pete Fowler that also included Millennium, Martin Denny, The United States Of America, The West Coast Pop Art Experimental Band, Silver Apples, Eden Ahbez and Dead Meadow among others. Heady company to be in for sure. But, who were Mandingo? I had to find out more. It seems that, at a time when Osibisa had carved a small niche for themselves in the UK with their funky African rhythms and Roots was being screened on TV, Mandingo were created in an EMI studio to cash in on the interest in African culture, some time around the early 1970s. Knowingly removed from the real thing, Mandingo possessed a contemporary orchestral sound and clever arrangements that were navigated by seasoned composer and bandleader Geoff Love.

A staple'of the easy listening circuit in the 1960s, Love had provided the music for everyone from Shirley Bassey and Mrs Mills to Max Bygraves, while taking a leaf from Mantovani's book by recording a series of albums as Manuel And The Music Of The Mountains. A gifted songwriter and seeming workaholic, Love also made a string of instrumental albums that featured great themes from TV series to movies. And, in doing so, he had the best players at his command. So, when the concept of Mandingo came along they were allowed to break free a little, to flourish on four albums that began with 'The Primeval Rhythm Of Life' in 1973.

By 1977, the concept was in closure but their final hurrah, 'Savage Rite' was to be their masterpiece. The brief had been relaxed somewhat and the juxtaposition of sounds and styles took them to a new place. Just listen to 'The Man From Takoradi' if proof were needed. As punk was exploding, Mandingo were on a wild flyer, making bongo-powered funk that was far removed from the original source idea but no less exotic.
by Dave Henderson, MOJO magazine, 2012 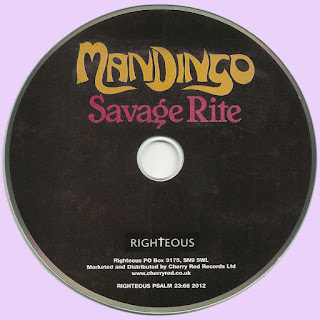 Free Text
Text Host
Posted by Marios at 3:29 AM 10 comments: