It's A Beautiful Day - Creed Of Love (1971 us, classy progressive rock, recorded live in san francisco) 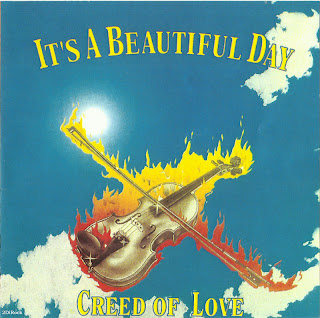 San Francisco psychedelic folk-rock unit It's a Beautiful Day was primarily the vehicle of virtuoso violinist David LaFlamme, born April 5, 1941 in New Britain, CT but raised in Salt Lake City, UT. After beginning his musical education at age five, LaFlamme later served as a soloist with the Utah Symphony, following an army stint by settling in the Bay Area in 1962. There he immersed himself in the local underground music scene, jamming alongside the likes of Jerry Garcia and Janis Joplin; after his short-lived Electric Chamber Orchestra splintered, LaFlamme also co-founded an early incarnation of Dan Hicks & His Hot Licks before assembling It's a Beautiful Day in mid-1967.

The group -- which originally included LaFlamme's keyboardist wife Linda, vocalist Pattie Santos, guitarist Hal Wagenet, bassist Mitchell Holman, and drummer Val Fuentes -- issued its self-titled debut LP on Columbia in 1969, scoring their biggest hit with the haunting FM radio staple "White Bird." Linda LaFlamme left It's a Beautiful Day soon after, going on to form Titus' Mother; keyboardist Fred Webb signed on for the follow-up, 1970's Marrying Maiden, while Holman exited prior to 1971's Choice Quality Stuff, recorded with new guitarist Bill Gregory and bassist Tom Fowler. In 1973, ongoing disputes over royalties forced LaFlamme out of the group he created, and upon installing new violinist Greg Bloch, the remaining members issued It's a Beautiful Day...Today before dissolving in the wake of 1974's 1001 Nights. LaFlamme mounted a solo career in 1977 with White Bird, continuing his protracted legal tussle with ex-manager Matthew Katz for years to follow.

Creed of Love is a live set recorded in Frisco's Fillmore West, on July 1st 1971, band in full form playing some of their classic stuff, with David's  unique violin expressiveness, the tapes have been remastered and the sound quality is very good. 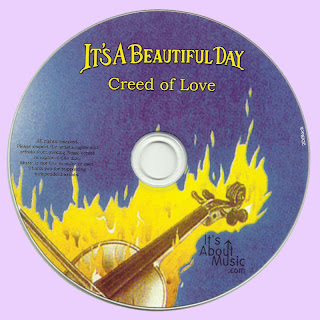 Free Text
the Free Text
Posted by Marios at 8:52 AM 10 comments: