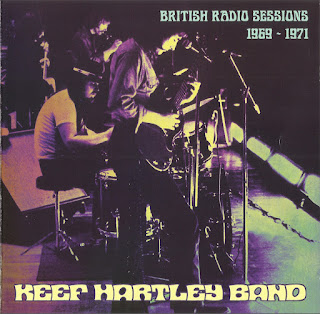 The history of rock and roll has produced innumerable drummers. A small number of them have become household names, Ringo Starr, Ginger Baker, Charlie Watts,John Bonham. How many though, have been talented and forceful enough to carve out a successful solo career, without the advantage of being in the public eye, via involvement with a big selling group? The answer must be, very few indeed. This article centres on one such drummer and band leader, Keef Hartley. His recorded legacy spans the era's of Merseybeat, R&B, The British blues boom, and prog rock,leaving a host of highly collectable records in his wake. Additionally, he's contributed his considerable talent to genres as diverse as folk, Jazz, Kraut-rock and one of the biggest selling albums of the 1970's.

To find the start of Keef's career, we must go back to his home town of Preston in Lancashire and the year 1962. At this time Keef was playing with a highly regarded local outfit, "The Thunderbeats". Whilst this name will be unfamiliar to most readers, it is worth a brief mention if only for the fact, that this group would be the starting point for other collectable artists of the next decade. Examples of these include David John and The Mood, Little Free Rock and Thundermother (who were to perform on one side of the extremely rare "Astral Navigations" L.P. released by Holyground in 1971). The Thunderbeats were to perform regularly around the NorthWest, even supporting The Beatles at Morecambe, however Keef was about to make his first move.

When a Liverpool promoter and club owner discovered Keef was keen to turn professional, he offered him the chance to join Rory Storm and the Hurricanes as permanent replacement for Ringo Starr. Keef didn't view his new band too highly, having seen them countless times on the same gig circuit. "Nah, I didn't rate 'em much. I always thought Rory was a bit of a prat, but I couldn't turn down the chance to earn a tenner a week, which was a small fortune in those days". So, Keef became a full time Hurricane, wearing Ringo's old luminous pink stage suit and playing gigs up and down the country. The group recorded only a handful of tracks during their six year existence, and Keef's part in them has never been properly documented before.

However he clearly remembers the day, when John Schroeder from Oriole records came to record the group in the Rialto Ballroom. "I was surprised to read in a back issue of Record Collector (Rory Storm feature, issue 99) that Brian Johnson played on the session, because that was certainly me. It was done very quickly as I remember. We came up did our set, and that was it, time for the next band." These recordings were to appear on the Oriole compilation "This is Merseybeat", and the track "Dr Feelgood",was lifted to become the first single by the group.

Keef's friendship with the producer Mike Vernon enabled him to play on many more great albums, some of which are highly sought after today. Joining friends such as Eric Clapton, Tony McPhee, Peter Green, Mick Taylor and John Mayall, he played on countless sessions for visiting American bluesmen, such as Champion Jack Dupree and Jimmy Witherspoon. This informal group of friends were to also feature (frequently uncredited for contractual reasons) on many other L.P's that Mike Vernon produced for Decca and later Blue Horizon.

The first tentative steps to a solo career were made following a call from Marshall Chess ( owner of Chess Records )to Mike Vernon and Neil Slavern. As Neil remembers, "Marshall was keen for Chess to keep pace with the move from straightforward R&B to a more progressive sort of blues. He'd heard the stuff Mike had produced and was looking for something similar. Keef quickly put a band together consisting of himself, Gary Thain, Paul Rogers and Paul Kossoff. They went into the studio and finished about 3 tracks. These were sent over to the States but nothing came of it."

Keef was keen to push on, and he began auditioning friends and newcomers for the new outfit. The nucleus of this was to be Peter (Dino) Dines on keyboards, Spit James (better known as Ian Cruickshank) on guitar, Gary Thain on bass, Keef on drums and Owen Finnegan on vocals. Things were beginning to gel. The Keef Hartley Band began to gig regularly and their Chicago based blues rock was getting a good audience response.

Of the original band members, Gary Thain went on to join Uriah Heep, but suffered an electric shock on stage from which he never fully recovered. Unable to continue with the band, he became addicted to heroin and died of an overdose at the untimely age of 27.

Peter 'Dino' Dines and Miller Anderson both joined Marc Bolan's backing group, which lasted until Marc himself died tragically in a car crash just before his 30th birthday. Dino then went on to work with Bolan tribute band T Rextasy before he died of a heart attack in 2004 aged 59.

Keef Hartley carried on playing, leading bands and doing sessions, but eventually found himself in constant physical pain from the drumming – a similar fate has befallen Ginger Baker – and had to wear a neck brace. He went into retirement from music in the 80's, working as a cabinet maker, and died of complications arising from surgery, aged 67, in 2011.

Miller Anderson has soldiered on to play a part in The Miller Anderson Band, Hemlock, Savoy Brown, Blood Sweat and Tears, Dog Soldier, T Rex, The Dukes, Stan Webb's Speedway, Chicken Shack, Mountain, and The Spencer Davis group, to name but a few. In July 2016 he released a new album of 12 original tracks called “Through The Mill” and doesn't show any signs of slowing down yet. Long may he run.
by Stevie King 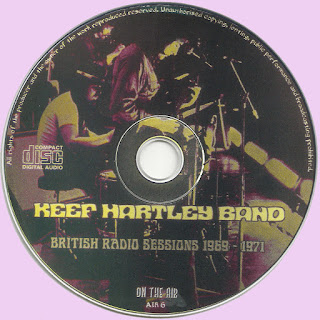