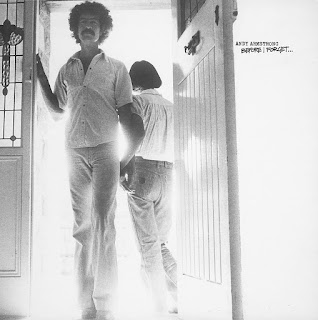 Before I Forget… was recorded at Pepper Studios, The first side of the album contains five songs. The opener is a marvellous effort; the gentle, personal “My Song” which features some beautiful singing and a layered vocal fade out that would do Brian Wilson proud.

The next two tracks are upbeat – “Strangers’ Names” comes first; a song about the difficulties of reconciling your inner self with the externally presented veneer. It features some top-quality backing vocals, scored and arranged by Andy. This is followed by the gentle boogie of “Half the World”, which postulates the notion of escaping from the seemingly universal propensity for conflict; “Half the world is crazy, picking on the other half”. Ex-Fraternity member “Uncle” John Ayers’ accomplished harmonica augments the bluesy feel of the song. To my mind these two songs come rather too early in the piece, creating a musical feel that isn’t typical of the rest of the record. Perhaps they could have been separated.

Track four is the sublime “Lullaby” – a haunting, beautiful song about love, protection and the fear of loss – “Who’s going to sing you to sleep if not me?”. This song is one of the highlights of the album. The inspired use of a string quartet, arranged by 19 year-old Tim Sexton, lifts what is already a very impressive piece.

The last song is the traditional ballad “Willy of Winsbury”, the only non-original on side one, and it treads familiar folk territory while featuring some interesting chording. Andy was inspired to record this after seeing it performed by folk band British folk band Pentangle some years before.

Side two opens with “Mountain”, seemingly a song about reaching an impasse and struggling to achieve your goals. The track immediately reminds me of Crosby Stills Nash & Young’s “Teach Your Children”. It features an impressive wah-guitar solo, reputedly done in one-take in the studio. All very pleasant.

From there we go into “Spiritual”, the second of this record’s real treats. A lone piano (reminiscent of “Hallelujah”) is joined by Andy’s passionate vocals and the song builds gradually, but purposefully, to create the most powerful moment of “Before I Forget…”.

This second-half of the record continues to showcase Andy’s songwriting talents, the only exception being the inclusion of another traditional number. “Lord Franklin”, the story of Sir John Franklin’s ill-fated discovery of the Northwest Passage in 1845 is the album’s penultimate song. Mandolin is supplied by Jock (John) Munro, who joins the band for the last two tracks. Ron Pearce also joins the band on accordion for this song.

The album finishes with the cosmic overload of “Seabird” and, although not as powerful as “Spiritual”, is an ideal closer and a good song to boot. Musical imagery abounds in the lyrics of this tale of arrival at what is, perhaps, the Promised Land. At least, that’s my interpretation. Andy tells me that the inspiration for this song was rooted in the natural world, although no less wondrous.

And, as “Seabird” disappears into silence, we are done.

Most of the songs on this album were written a few years before its release – more like 1972 than 1979 – and, upon listening, that makes sense.
by David Robinson, 2009 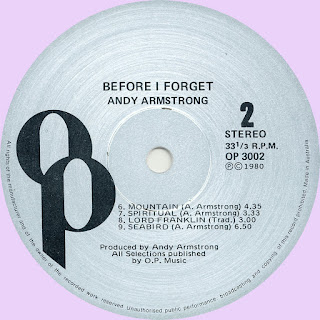 Free Text
Just Paste
Posted by Marios at 8:17 AM 8 comments: