Anyone who has ever seen Tom Pacheco perform knows that they have been in the presence of greatness, watching a singer/songwriter who is a master of his craft and who, if there were any justice in the world (even though we know such a commodity is in desperately short supply in the 21st Century), would be as well-known as Woody Guthrie or Bob Dylan.

Tom has lived the life of a troubadour since the mid-1960s, and has now made around 20 original albums which have been released on a variety of labels in the USA (his earliest recordings and several more recently) and Europe (mainly in the last 20 ears). Yet Tom is not - yet - a household name, and one cannot avoid thinking that there are parallels between this often brilliant and always engaging artist and another artist in a different field, the celebrated painter Vincent Van Gogh.

The latter is now recognised s a genius, yet in his lifetime, he famously failed to sell a single painting. Tom's fate has not been quite so desperate. He has managed to sell small quantities of is amazing albums over the past 35 years, but never as many as his artistry deserved.

Tom was born on 4th November 1946, in New Bedford, Massachusetts. His father, Tony Pacheco, was a jazz guitarist who played with Django Reinhardt as well as solo in clubs in Europe before returning to the US to raise a family and open a music store, where he also taught guitar.

Tom began playing guitar at the age of 10, studying both Flamenco and classical styles, and in 1965, as a 9 year old, released his first solo album, “Turn Away rom The Storm”, a collection of original folk songs he had written two or three years before. It was made for a small local label known as Witchgreen Records, and Tom thinks they probably only pressed 500 copies. He also notes that he now owns that album and could be leased to license it if anyone's interested. The Van Gogh comparisons continue: that solo album could soon be reissued, and now the Euphoria album.

Tom left Massachusetts to study at Hofstra niversity in New York City, where he formed a band called The Ragamuffins, which supported Jimi Hendrix in a number of occasions and also released two singles on Seville and London Records. These singles are extremely obscure; no doubt, if Tom had become a superstar, they would have been reissued on many occasions, but as it is, hunting through oldies shops probably provides the only solution if anyone feels that owning them is important.

In 1969 Tom joined forces with The Beckets which actually were Roger and Wendy Penney, they started their entertainment careers as actors, working with Boston's Theatre Company.  Using the stage name Roger and Wendy Beckett, by the mid-'60s the pair had turned their attentions to music, becoming fixtures on New York's Greenwich Village folk club scene.  By the time they released their 1967 debut collection, they'd followed the crowd into a more electrified folk-rock sound with Roger jammin' on electric autoharp, while Wendy had picked up electric bass. After splitting Euphoria the couple toured and released  records as Roger and Wendy and later -in mid seventies- as The Bermuda Triangle.

Back to Euphoria,  Tom recalls: 'Thirty years later, I listened to Eurphoria album and realized it was not as bad as I thought it was, considering the times. If it weren't for that album at that point in my life I might have quit playing music professionally and become an English teacher, something I had gone to University to study".

Which explains why Tom's lyrics are so impressive. He could have been a great teacher... The sleeve picture of Euphoria is curious, to say the least. A very tall female standing with a male dwarf. Tom explained: "That was a picture of a relative of mine, who was dreadfully poor, but very attractive, and she married a rich dwarf who lived on an island in The Azores, and lived happily ever after with him. The female head has half of Sharon's face and half of Wendy Becket's and the dwarf has half Roger's face and half mine".

Tom now has a band in Norway with whom he recorded 'The Long Walk', released by Playground Music Scandinavia, which is an album full of his songs, while Jim Welder produced and performed instrumental tracks on 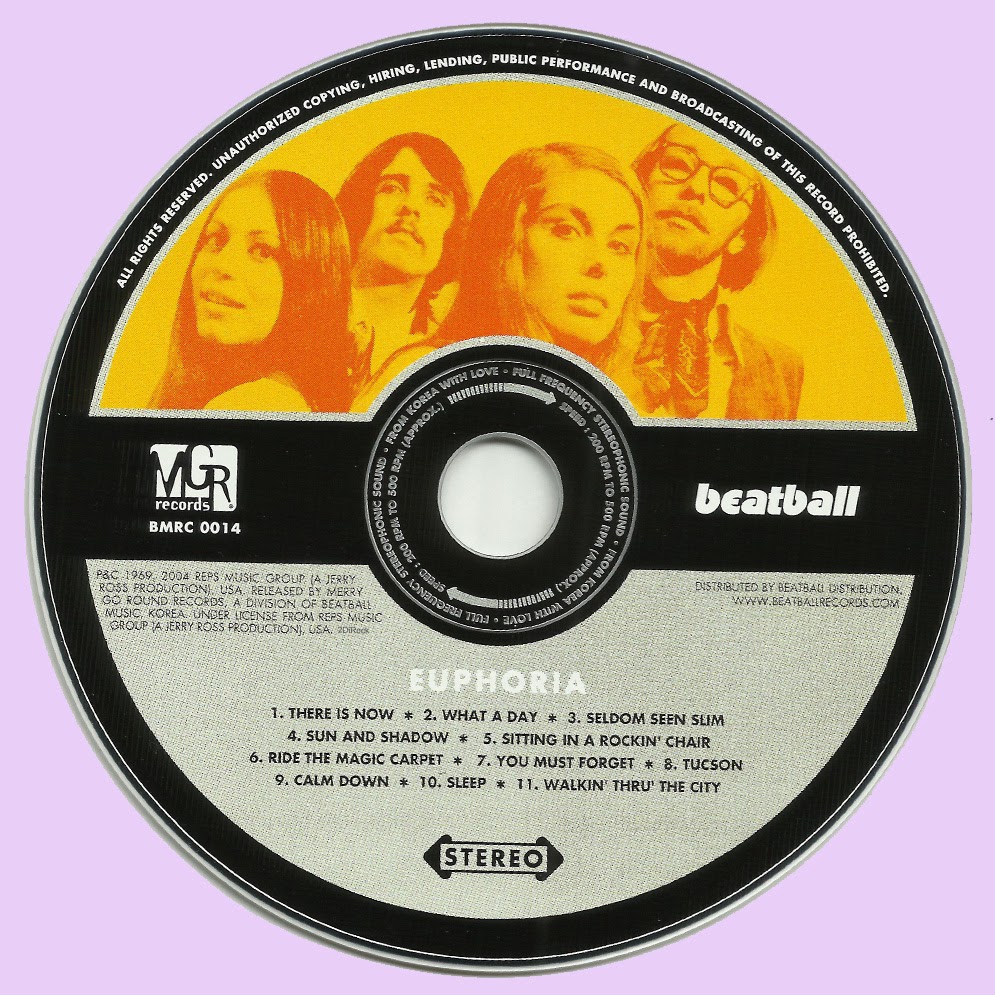