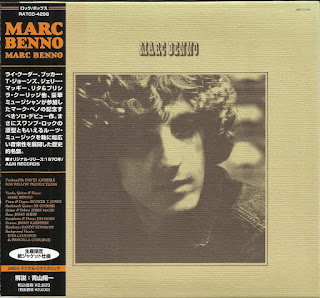 Marc Benno was known through the Asylum Choir with Leon Russell in the end 1960s. He is still a Texas musician who actives as a blues guitarist, a piano player, a singer songwriter, etc ... in the United States.

He was born in Dallas in 1947. Thanks to the environment which managed the Texas State Fair's Music Hall Gardens, he always has a special good luck with music, as Benno met stars like Sam Cooke, Laverne Baker, Frankie Avalon, Paul Anka, The Drifters, Lloyd Price and so on ... in the backstage. He had special music talents.

When Benno headed to LA to further his career in the mid-1960s, he started his own music activity. As you know, he released two albums of the Asylum Choir with Leon Russell. He raised his career for his work which was including guitar session at LA. Woman album of The Doors and cooperating many musicians like Eric Clapton , Lightnin' Hopkins, Bill Wyman, Georgie Fame, Rita Coolidge, Eddie Murphy, etc...

In 1970, Benno contracted formally with A&M Records and at last he released his the first solo album, Geographic environment of the Southern United States is good for the blues musicians, elements of music taken to professional musicians form childhood, the natural talents and faithfulness, the musical wisdom and technology in learning collaboration with others, and the passion and love for music which only he knew all of them was made to one work.

As a Texas blues guitarist to play well, Marc Benno's the first album 'Marc Benno' will not be able to explain without his beautiful guitar as The Doors Album which was invited to work. Despite of soulful mood and distinctive sticky rhythm of easily attractive the Southern music his confident guitar without over and lack playing, piano : Booker T. Jones, bottleneck guitar: Ry Cooder, Gerry McGee, Jerry Scheff, Jim Horn etc... outstanding performances in several sessions. Rita and Priscilla Coolidge sisters's a fantastic chorus part everything is perfect breathing. Songwriting passed on the sweet melody and Marc Benno's light blues is not only the musical completeness but the worth as a masterpiece remembered in our heart.

After Ambush's recording, Benno formed a new band, Marc Benno & The Nightcrawlers, who were primed to become the next big thing, and went off on tour opening for Humble Pie and The J.Geils Band - getting star treatment on tour. One of the Nightcrawlers was a young guitarist named Stevie Vaughan(he'd start using Ray later).

During 1974-75, his childhood influences came full circle when he joined Lightnin' Hopkins' band as 2nd guitar player. Benno's career got an unexpected boost in 1985, when his song "Rock & Roll Me Again" won the Grammy for Best Score for a Motion Picture, he got a more popularity.

Until now, he was been working hard, writing songs, releasing albums. He has become a venerable blues's giant and musician. As if he may be similar to backstage's images of many music starts who met in childhood. But it is sure that he is already a great bluesman.
CD Liner Notes 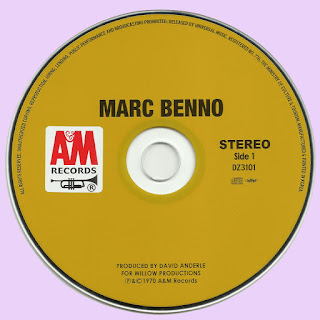 Free Text
the Free Text
Posted by Marios at 5:09 AM 2 comments: