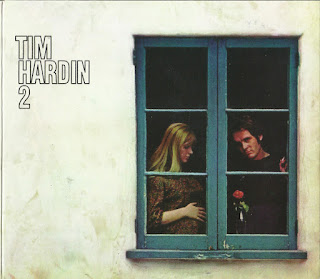 It’s fair to say Tim Hardin’s surge of creativity between ’66 and ’67 produced some of the decade’s best songwriting. While his debut album, Tim Hardin 1, feels rushed – most songs clock in at two minutes with splatters of orchestral strings over simple lyricism – Tim Hardin 2 paints a more complete picture.

Hardin’s hit parade was squandered by Bobby Darin’s rendition of the record’s opener, “If I Were A Carpenter.” Darin broke the Top 10 with “Carpenter” in ’66, which Hardin was unaware of until he heard it on his car radio. It’s a mere imitation of Hardin’s plaintive vocals, which were modeled after jazz pianist Mose Allison and country singer Lefty Fizzell.

“If I were a carpenter and you were a lady/ Would you marry me anyway, would you have my baby,” Hardin sings. It’s a question directed at Susan Morss, his lover and muse. On the album cover, she palms her swollen stomach as he peers out at the back courtyard of their Spanish house in L.A.

Hardin met Morss, whom he calls “Susan Moore,” when she was acting on the soap opera The Young Marrieds. They hooked up at the disapproval of her father, a former major-general in the Army and a prosecutor in New Jersey. On “The Lady Came from Baltimore,” Hardin describes him as a man who “read the law” and believes that Hardin marries “Susan Moore” to “steal her money.”

Despite Hardin’s affection for Morss, his relationship with heroin (which he describes in “Red Balloon”) proved to be overwhelming, and within three years his life as a “family man” ended. “Bought myself a red balloon and got a blue surprise,” he lulls over the song’s haunting chords. But it’s not all so dark; his brightness is very much alive on “See Where You Are and Get Out” and “Black Sheep Boy.”

Hardin tried to stop using prior to the birth of their son Damion in ’67. He seems painfully aware of nearing fatherhood in the songs “Baby Close Its Eyes” and “Speak Like a Child,” where he parallels his state to Hank Williams’ death: “Goodbye Hank Williams my friend/ I didn’t know you but I’ve been the places you’ve been.” “Tribute to Hank Williams” concludes the album, delicately sketching a farewell to Williams that’s oddly reflective of his own goodbye – Hardin overdosed on December 29, 1980.

Every muse has a lifespan, and it’s certainly true for Hardin, whose songwriting did not thrive after Morss took Damion and left him at his home in Woodstock. His drug use soon increased and his writing dried up. Tim Hardin 2  opens a window into his short-lived genius.
by James K. Williamson 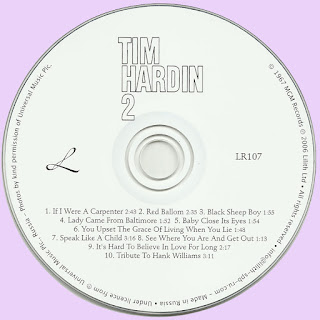 Free Text
Text Host
Posted by Marios at 10:05 AM 3 comments: