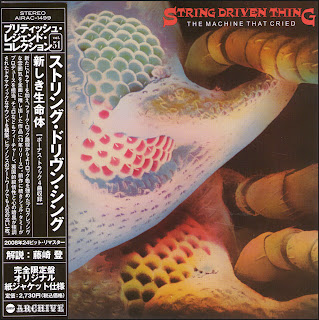 String Driven Thing's rise ought to have been inexorable. Their latest single, "Circus," was making waves on both sides of the Atlantic, and plans were afoot for the group to join Genesis on their own latest tours of both Britain and the U.S. Unfortunately, the beginning of 1973 saw Chris Adams hospitalized with a collapsed lung, an event that was to have a serious impact on String Driven Thing's future.

That experience, and the nightmare of the next week's worth of agonizing recuperation was to form the inspiration for much of The Machine That Cried, String Driven Thing's next album. However, although the band did make it onto the British dates, the American shows never happened; instead, the band found itself shunting up and down the British highway system, playing small clubs and universities, and breaking in the new material.

The group's management at this time was being handled by Charisma's own in-house team, a less than satisfactory arrangement, but one that Stratton Smith seemed unwilling to change. Indeed, when Adams approached him to speak of the group's "total lack of confidence" in the setup, he simply "hummed and hawed and did nothing." Neither was that the end of the group's travails. In conversation with another label staffer one day, Adams mentioned that the band was considering adding a drummer to the lineup. A few days later, Stratton Smith showed up at a concert in Oxford, and instead offered them a keyboard player, Robert John Godfrey. He survived a week of rehearsals, but just one show, at the London Roundhouse, before the band declared him unsuitable and brought in a drummer (fellow Glaswegian Billy Fairley) after all. Godfrey went on to his own solo career at Charisma.

In this form, String Driven Thing returned to the studio to record The Machine That Cried, alongside what remains their best-known number, the single "It's a Game." The LP is one of the finest progressive rock albums of the entire era -- its CD reissue was widely heralded as among the most intelligent re-releases of recent years, and the excitement that greeted the re-formed String Driven Thing's return to action hailed almost wholly from memories of this marvelous album. At the time, however, all seemed doom-laden. "It's a Game," although it received plenty of British airplay, went nowhere (although a hit Bay City Rollers cover later went some way toward making amends)
by Dave Thompson 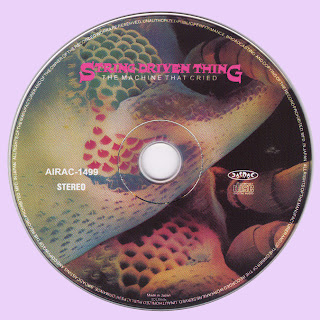 Free Text
Just Paste
Posted by Marios at 9:05 AM 17 comments: