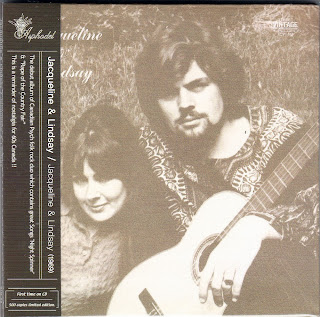 Born in Cardiff, Wales son of a Lay Preacher-Merchant Navy Sea Captain, Lindsay crossed the Atlantc Ocean six times by small cargo steamer, before the age of eight Captain Tom Organ took his wife Dorothy and two young children, Lindsay, and his older sister Anthea, on three exciting voyages to Canada. To this day, Lindsay can remember the massive storms, tidal waves, icebergs, and whales, he saw as a small boy. He says" I will always be grateful for the incredible memories my father gave me by taking me on those voyages", "I will forever love, and remain in awe, of the ocean".

Lindsay started playing guitar and writing songs at the age of eleven. Lindsay was 17, and Jacqueline Clifton was just 14 when they first met and started going together. 'The Land of Opportunity' was calling and after being married just a few months, they emigrated to Canada, arriving on the last day of February 1967, with approximately $50.00 cash, a trunk full of "stuff", including Lindsay's meager record collection, and hearts full of hopes and dreams.

After a year in Toronto, they turned a singing and performing hobby into a full time professional career in May 1968. Toronto agent Paul Simmons booked them their first gig. "The Nor-Shore" hotel, Thunder Bay (Port Arthur), a sixteen-hour drive from Toronto. "We were thrilled," says Lindsay of the time. "What a way to see the new homeland of Canada". The booking was an instant success. Lindsay recalls "It's just that we were such a novelty". "We sang 'light rock', and the popular folk songs of that time. But we had these really strong Welsh accents that almost no one had ever heard before". "That year we worked 48 weeks straight, and that's at six days a week, and I swore I would never work that hard again".

1968 their second year as full time professionals, they were offered to be managed by Andy Anka, father of the legendary Canadian singer/ songwriter Paul Anka. The relationship lasted for quite a few years before they parted ways. "Andy and we were just moving in different directions," says Lindsay. "Although, we had a great relationship while it lasted. Andy opened a lot of doors for us, he got us some great TV and radio exposure". "I'll always remember him as a very kind and generous man". The duo got to perform CBC radio and Television shows with some of Toronto's top studio musicians of that time: Mo Koffman, Guido Basso, Rob McConnell, Peter Appleyard, Ed Bickert, Don Thompson, Terry Clarke, Doug Riley. They shared television appearances with Dr Music, Gene McLellan, Catherine McKinnon, and many other popular Canadian performers of that time.

In 1969 they were the act that opened Toronto night spot, "the Jarvis House". They played numerous return engagements to 'line-up around the corner' crowds, every night. "It was 'The Age of Aquarius' days", Lindsay recalls. "Every night ended in encore after encore". "The crowds would go wild", "One night after we tried to leave the stage, they picked up Jacqueline and literally carried her back on. During that time they were offered a recording deal with Art Snider, owner of a Toronto recording studio called "Sound Canada".

Lindsay and Jacqueline were then living in Burlington, close to Toronto. They asked Ron Knappett, their next door neighbour's son, and an experienced jazz drummer to drum on their recording session. Through Ron they were introduced to two young musicians, just out of school, Daniel Lanois and his school mate Bob Doige. Bob Doidge had played bass in Ian Thomas's band Tranquility Base and Danny had been performing in groups when he was still in school. He and his brother Bob Lanois were starting to build a studio in the basement of their mum's house in Ancaster, Ontario.

At "Sound Canada", which had the luxury of being '8 track', Lindsay was supplied with a sound engineer, an Irish immigrant named Ernie Lyons ("lt's time fer another jar"), and all the freedom to produce what he wanted. The result is an eclectic mix of Lindsay early original compositions, with all sorts of experimental sounds and vocals. Lindsay quote: {"I was still learning the craft of songwriting. One song I'd recently placed second in a British song contest, but the one that came off the best was 'Night Spinner'. It's a little folk song I wrote in Barbados, and we recorded it without drums.

It's more interesting really from a historic point of view. Of the four people on that song: Bob Doidge (bass), later produced Gordon Lightfoot, Brooks Williams, Prairie Oyster, and now owns Grant Avenue Studios in Hamilton, Ontario. Lindsay later produced Alanis Morissette's first record, and Daniel Lanois (lead guitar) of course has produced almost everyone else from Bob Dylan, Peter Gabriel, U2, Willie Nelson, etc, etc., etc. Most of the sessions took place at 1:00 a.m. to 9:00 a.m. after we'd been playing club gigs. But I remember we all had a hell of a lot of fun, and I believe we all learned a lot about sound and recording technique that was a good foundation for what came later on. Thank you, Art Snider'.}

"In a related story, around that time, Art owned the masters of some old sessions by Gordon Lightfoot and by now Gordon had become very successful". "Art Snider decided to capitalize on Gordon's success, and released the tracks as "Early Lightfoot'. "Bob Doidgem, our first bass player, who later in 1999 recorded and produced Lightfoot at Grant Avenue Studios, said that Gordon himself confirmed this "Lightfoot Legend" to him. Gordon bought the masters back from Art Snider, bought up every single copy of the Album that was in the warehouses and in the shops, and with his manager, laid them out in his driveway. Then together they took an axe and smashed every single one. Apparently Gordon felt the same way about his early album as I did about mine".

Shortly after the release of this album Jacqueline and Lindsay added other musicians to their stage line-up. At different times the group had as many as 6 members on stage. In 1971 they moved out of the city and bought a 125 year old stone farmhouse on 200 acres of beautiful rolling land, just outside of the southern Ontario farming community of Mount Forest.
Canadian-music 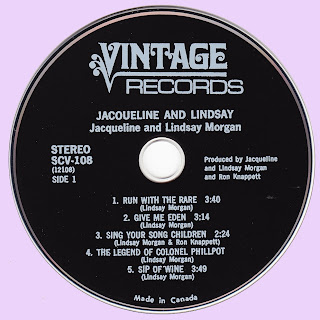 Free Text
Text Host
Posted by Marios at 9:30 AM 6 comments: