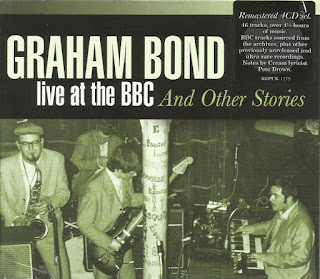 Many of the articles that have recently appeared around this four CD compilation of Graham Bond’s BBC sessions tend to assume that the reader will be aware of who Bond was. Unfortunately this is not the case. While talking to an acquaintance of similar vintage as myself a few weeks ago, I mentioned this latest box set from Repertoire. “Graham Bond, I don’t recall him…” resulted in disappointment more than surprise from my side. So, for those who were there but find that almost daily our memories are fading, but more importantly for those who weren’t around in the sixties here’s a few facts.

Graham Bond was an important (and imposing) figure in British music in the sixties and seventies. Bond was an innovator, on a par as those more celebrated British musicians such as Alexis Korner and John Mayall, who also served as a training ground for many musicians who are still rightly regarded highly half a century after they first took to a stage. Bond was initially known for playing alto saxophone while trying to scrape a living as a jazz musician on his chosen instrument. After a stint with Alexis Korner’s Blues Inc., Bond teamed up with fellow Korner members, Jack Bruce and Ginger Baker, and with guitarist John McLaughlin formed the Graham Bond Quartet before morphing into the Graham Bond Organization, dropping McLaughlin in favour of Dick-Heckstall-Smith on tenor sax while Bond played keyboards, heavily featuring the Hammond organ.

It was during this time that Bond, while never forsaking his jazz leanings, introduced the rhythm and blues stylings that were so popular in the mid-sixties into his music and in doing so built up a sizable following. But, even with two albums released in 1965, ‘The Sound Of ‘65’ and ‘There’s a Bond Between Us’, and a dedicated fan base that attended his live shows, although he gained the respect, he never achieved the glory that many of his fellow band-mates did. It’s felt that Bond was under-appreciated then and even though his albums have been available through the digital age he’s still not recognized as the innovator he truly was. Bond was, and still is, one of the most important figures in British R'n'B.

For Bond’s full and fascinating story there’s a book, ‘Graham Bond: The Mighty Shadow’ which was published in 1992 and is still available from the author, Harry Shapiro, which details the rise and fall of Bond’s life and music, and is simply one of the most compelling books about a musician ever written. It’s a must-have for any music fan.

Of course, Bond’s life was complicated and there was a darker side to him, not helped by his drug addiction and his obsession with the occult, but one thing is certain; his death, which many to believe to be suicide, at the age of thirty-six robbed the music scene of an immense talent.

Bond went through a succession of bands, all of which are covered in Shapiro’s book, and while his time on this earth was short he influenced and introduced the world to many fine musicians. Although some of his more popular albums have hardly been put of print, during the last few years Repertoire Records have finally given part of Bond’s body of work the respect it’s due.

In 2012 the label released ‘Wade In The Water’, a four CD box set lovingly put together by poet/lyricist Pete Brown, who is possibly best known for his work with Cream and another underrated artist who also provided the foreword for Shapiro’s book as well as actually working with and releasing music with Bond. That lovingly compiled box set covered all that was really required from Bond’s early years, remastered with his usual skill by Jon Astley. Now Repertoire have gone the extra mile and issued another four CD box set covering Bond’s live work at the BBC and a little more.

While not as elaborately presented as ‘Wade In The Water’ - the book-sized box has been abandoned for a couple of double standard CD jewel cases - the fact that this music is now available at all is a blessing. Pete Brown again supplies liner notes and Astley once again has remastered the set. There have been many negative comments about the quality of some of these sessions and it’s true that some tracks do suffer from imperfections, but rather that than never having the opportunity to hear or relive them. With Astley in charge of the sound, you can be certain that they’ll never be improved upon anyway.

‘Live at the BBC’ covers more ground than it’s (mainly) studio counterpart. There is a handful of tracks from the Bond and Brown period. Bond’s Initiation era is featured and, of course, both Bond’s Quartet and Organization work is covered. The earliest recordings are from 1962 and the latest from 1972. There are sessions from BBC’s Jazz Club with Bobby Breen, the Quartet backing Duffy Power, Bond backing the Brian Dee Trio and so much more.

It’s not just fascinating for Bond devotees; anyone who has an interest in or is discovering British R&B for the first time will find plenty to enjoy here. While some of the tracks do show their age and sound a little dated, there are those such as the Bond and Brown ‘Sounds of the Seventies’ sessions that still sound as fresh as the day they were recorded. It’s also good to hear Diane (Bond’s wife) singing on a couple of those songs. While for the most part it’s fascinating to hear the various DJs introducing the songs, Pete Drummond sounds like he’s just woken when presenting these particular cuts, but hearing John Peel, Steve Race and George Melly is a joy.

While the quality of the four songs taken from a bootleg of the BBC ‘Pop Goes the Beatles’ recorded at Aeolian Hall, London in 1963 is one of the sections that has been singled out for criticism due to the audio imperfections, for some it will be a highlight. With Duffy Power on vocals, McLaughlin on guitar, Jack Bruce playing the double bass, Ginger Baker on drums and Bond’s Hammond driving the songs along, it’s not only a collector's dream come true but a piece of history many thought was lost forever.

All those connected with this set, especially Repertoire Records, should be commended for making this music available and at a reasonable price. The amount of love, care and passion that has gone into both of Repertoire’s Bond box sets is a lesson as to how it should be done to much bigger labels. Now all we need is some young, hip artist to check out Bond’s not inconsiderable body of work and maybe he’ll finally receive the acclaim he so rightly deserves.
by Malcolm Carter 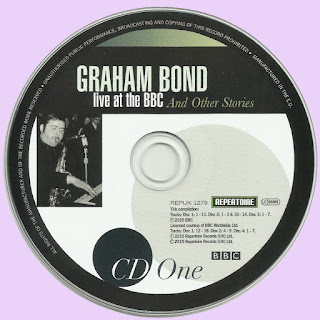 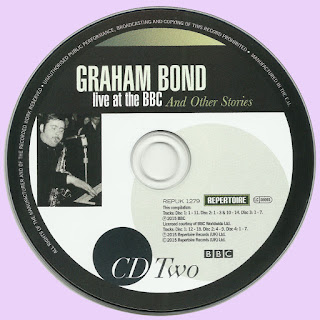 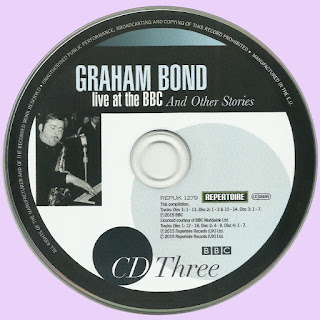 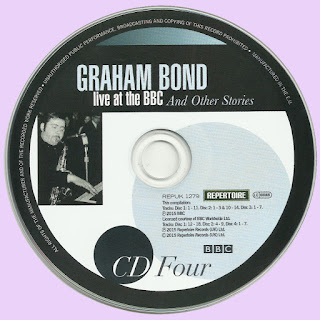