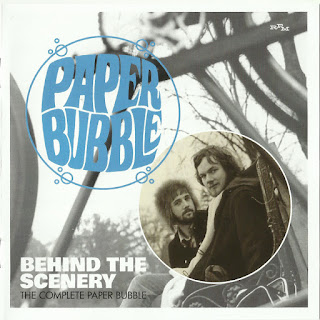 Recognise this plotline? In 1969 folk-rockers Paper Bubble recorded Scenery. Despite some impressive songs by the band’s core duo, Brian Crane and Terry Brake, fine vocals and most of the future Strawbs backing them, the album sunk on release.

After decades of highly prized collectability, Scenery returns, along with an unreleased follow-up, instrumental mixes, a rare single and a final album from 1981. There are engaging moments throughout, particularly on Scenery, such as the epic period-piece Energy, and the pensive Tomorrow Never Comes Like A Silver Spoon. When it gets a bit too barefoot-in-the-park on Being Human Being, the band’s skilled delivery throughout helps compensate. Indeed, with blasting keyboards from Rick Wakeman, the frenetic Mother, Mother, Mother rocks your head off.

The second album showed interesting signs of artistic development on tracks like Somewhere To Belong. Despite this, the label cancelled the release and the duo returned to the folk club scene. Their return in 1981 is listenable enough, though occasionally too close to some of that period’s waterlogged singer-songwriting.

Nevertheless, full credit to RPM for tracking all this down and the package comes with a characteristically excellent, informative booklet.
by Steve Burniston

Post psychedelic folk-rock featuring the classic album Scenery plus its previously unreleased follow up LP, both with the song writing duo backed by The Strawbs.

In 1969 a classic folk rock album escaped on Deram, Scenery by Paper Bubble, produced by Dave Cousins and Tony Hooper for their then production company Strawberry Music. The album’s merits took a couple of decades to be recognised but today is now highly regarded (and with an average LP collectors price of £100 to boot). Recorded in the same year of release the producers engaged Rick Wakeman, and Richard Hudson, John Ford, Paul Brett recently of Velvet Opera, to back the Paper Bubble duo Brian Crane and Terry Brake, at Regent Sound engineered by Tom Allom.

The same team re gathered again in 1970, this time at Olympic studios to lay down the songs for a follow up called Prisoners Victims Strangers Friends. By now the backing band had gelled as a unit, along with Cousins and Hooper, as The Strawbs and sailed off into the sunset. Same time the initial return on ‘Scenery’ had failed to inspire the suits and consequently PVSF was left on the shelf. Happily a sound desk recording was preserved by Brian.

Thus RPM is proud to present both Paper Bubble LPs as backed by The Strawbs, plus the duo’s late 70’s single, and to round off Disc 2, following PVSF, their final work together the 1981 album I’m Coming Home.

As a bonus on Disc 1 we have been able to include freshly mixed versions of 5 songs from Scenery and 1 from PVSF, taken from the only surviving 48 year old multi track masters.

For the first time we have the Paper Bubble story direct from Brian and Terry in the booklet, plus photo’s from Brian own archive.

Brian Crane continued to write songs and in the 80’s had the distinction of an entire album’s worth of his music being set to Hindi lyrics and released by CBS India. The success of this led to one of those songs being re-recorded by another artist AMAR in the 90’s and again selling big numbers in the Asian territories. In 2018 a theatre production called ‘Poppyfields’ is being staged by Theatre Severn which features 8 of Brian’s songs, including 3 from the Paper Bubble era.
C-R 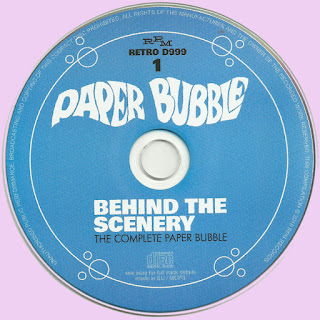 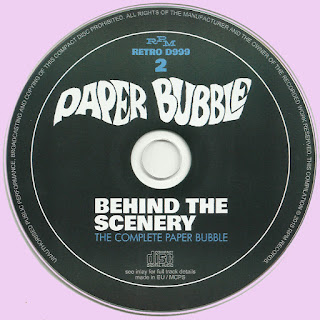