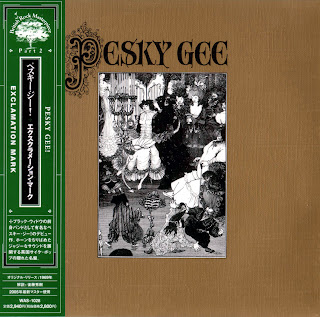 Now a mere footnote in '60s rock history, Leicester, England's Pesky Gee! are perhaps remembered more for the band that they became -- notorious Satan-worshipers Black Widow -- than for their actual music. Taking their name from a song in another local group's repertoire, Pesky Gee! were originally formed as a soul band before constant gigging slowly pushed them toward a more experimental and progressive style of rock & roll.

By 1968, the band consisted of Kay Garrett - lead vocals, Kip Trevor - vocals, guitar, harmonica, Chris Dredge - guitar, Clive Jones - saxophone, flute, Alan Hornsby - brass, Bob Bond - bass, and Clive Box drums, and had signed a deal with Pye Records. A cover of Vanilla Fudge's "Where Is My Mind" was chosen as their first single in March 1969, but when it failed to chart, both Dredge and Hornsby flew the coop, being replaced by guitarist Jim Gannon keyboardist Jess "Zoot" Taylor.

Wasting little time, this "new and improved" lineup managed to record Pesky Gee!'s cleverly titled first album, Exclamation Mark, in a single, one-night, four-hour session. Issued in June of the same year, the record sadly fared no better than their single, and the impatient Pye soon showed them the door.

Feeling that this particular incarnation had run its course, and simultaneously observing the general populace's growing fascination with forbidden topics like black magic and the occult, Pesky Gee! decided to re-invent themselves as a theatrically Satanic outfit by assuming the fittingly conspicuous name of Black Widow.
by Eduardo Rivadavia 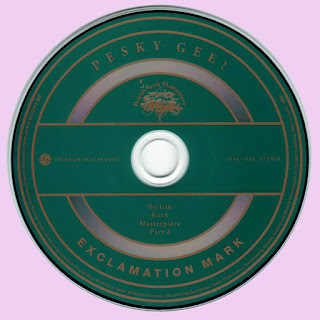 Free Text
Text Host
Posted by Marios at 9:22 AM 7 comments: