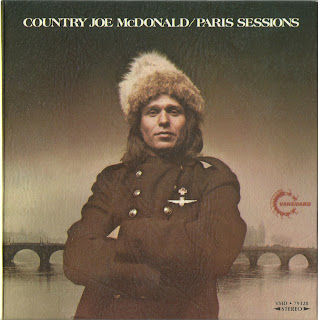 Organized by the French newspaper L'Humanite, the fair took place on the last weekend of the traditional French August holiday month. It's held in Paris and attracts between 300,000 and 500,000 people on the 2 day run. The 1972 headliners were Country Joe followed by the Who. As an attempt to kill two birds with one stone we tried to record the show. It was a dismal failure as there was a strange hum evident throughout the entire performance. As Joe had agreed to do three television shows in Paris, we decided to record the band in the interim.

Strawberry Studios were recommended by the Vanguard's French licensee and we set out to do this. A brief note on the Studio. It was located in an old Chateau; self contained it provided three meals a day, and could accomodate at least two bands and crews. Of course in those days crews were only one or two people. Joe's band in France at that time consisted of Anna Rizzo (from Grootna) and David Getz (from Big Brother and the Holding Company) on drums, Sebastian on Conga, Peter Albin (also from Big Brother) on Bass, Phil Marsh on guitar and Dorothy Moskovitz on Piano, (founder of the United States of America) & Tuki Bailey on various reeds.

Tucki later played in a couple of Sylvester's bands, and wrote music for some very classy soft core movies (along with Michael Bloomfield). As can be expected this was a difficult bunch to keep entertained. As a matter of efficiency we brought Sam Charters (who had produced most of the Fish records for Vanguard) down from Sweden and for the duration along with his wife Anne (the renowned biographer of Kerouac and compiler of the recent "letters" and the "Portable Beat Readers") tried more or less to keep order. One must also imagine the scene.

In one wing of the Chateau was Joe and his band - very Berkeley - the only thing we have in common was the evening meal and the endless (losing on our part) games of "fussball" - the table soccer game popular in Europe). There had been some curious weirdness between Tull and the Fish, which I found out about much later. It turns out that when Beck canceled out of "Woodstock" his agency had pressured Michael Lang to hire lull instead. We never found out why he didn't, but the slot was filled by Country Joe and the Fish and Butterfield – leaving the possibility open for Joe's now legendary solo performance, lull wasn't very pleased about it even then, three years later.

When it was determined that most of the material was not salvageable (one tune was used, in the Best of Country Joe McDonald collection on Vanguard, I used "St. Tropez"-VCD 1 19/20). Joe recorded all of the songs that the group knew. Most of the recording was fairly odd, and when Joe got back to the Bay Area, he went into Different Fur Recording in San Francisco and recorded some more. All of the songs on this album were performed at one time or another by the entire larger band which at times included Barry Melton on lead guitar.

"Fantasy", had been released as a 45 in 1971 having been recorded by Joe in London, backed by the English group "Pretty Things". "Zombies In A House of Madness" written by Michael Beasley is a poem given to Joe while appearing at San Quentin Prison - Beasley has since disappeared, but performs sporadically from time to time.

This was one avant-garde band. During its brief life from 1972 to the fall of 1973, its obnoxious biting attitude; or as Joe puts it; "the trash can sounding drums and spoken sort - of sung lyrics filled with street language was just a bit too much for 1973". As he puts it, the audiences could not really get the concept behind "Sexist Pig" or "Coulene Anne". The fact that women were playing in the band and weren't just background singers was upsetting to many promoters. In one incident as described by Joe, while returning to the hall after dinner (in those days the promoter barely provided sodas and beer) the back stage guard insisted that "chicks had to have passes".

Though it was repeatedly explained to him that they were in the band, it took a front office person to get them in, narrowly avoiding Joe a trip to the local station for harassing the security personnel. All in all the band was ahead of its time. As with all cutting edge events, its relevance is always more historically important than commercial. All in all an interesting recording.
by Bill Belmont, Berkeley, May 1996

This is the last part of a four CD limited box set, released through Akarma label in 2002, it contains also a 36page Book with detailed informations about Country Joe McDonald and Lyrics from these specific albums. 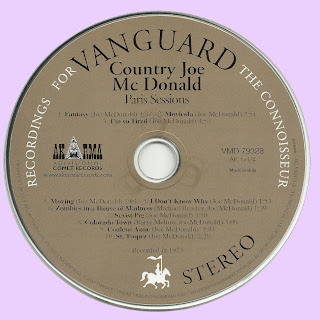 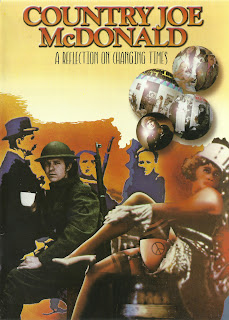 Free Text
Text Host
Posted by Marios at 3:50 AM 6 comments: