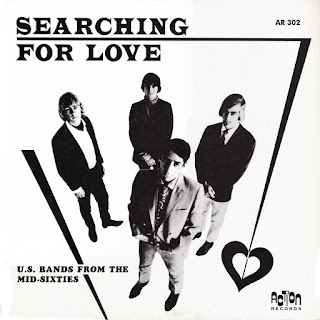 This is another rare compilation also released by the Greek label Action in 1999.

Tidal Wave was a US garage beat with Motown soul influence, they release few singles between 1968-1970, no connection with other bands called Tidal Wave.

The Avengers came from Philadelphia and released a couple of singles round 1966-68.

From Miami Florida The American Beetles started as the R-Dells recorded many tracks but non made a dent in national market. During a Miami club perfomance as the prank the boys combed their hair down and jokingly christened themselves as The American Beetles.

King Charles And The Counts were from Pocatello, Idaho."King Charles" was in fact Charlie Bieker, who also played with Easy Chair, member and songwriter was Steve Eaton whose songs have earned gold and platinum records for The Carpenters and Art Garfunkel. His songs have also been recorded by many other artists, including Glen Campbell, The Righteous Brothers, Ann Murray, and Lee Greenwood. Steve has received Emmy nominations for his original music written for PBS and has written music for the Nature Conservancy, National Wildlife Federation and the National Endowment for the Arts. Some consider his song Idaho I Love You to be the true state song of Idaho.

The Birdwatchers were a garage rock pop band active in the 1960s in the Miami area. The band dabbled with an Everly Brothers sound in their early career (1964), even releasing a version of "Wake Up Little Susie" on Tara, a local Florida label. During 1966-67, the band released 5 garage-pop 45s on the Mala and Laurie labels, in addition to local releases on the Tara, Marlin and Scott labels. Most of these featured the vocals of Sammy Hall. Depite national TV exposure on teen shows such as Where The Action Is, the most the band ever made it on the charts was #125 on Billboard's Bubbling Under Charts in September 1966 with "I'm Gonna Love you Anyway." As evidence of their local popularity another of their records ("Girl I Got News for You") made Billboard's Regional Breakout Charts for Miami peaking at #3 locally in April 1966. The band also appeared in the 1967 film, Wild Rebels - a local Miami, Fla., production.

The You Know Who Group

Malcolm Hayes, Tommy Williams and Tommy Murphy joined a band called "D & The Dominoes" while still in high school in Texas City, TX.  That band soon became the "Countdown 5" joined by Steve Long and John Balzer.  The "5" was a 60's rock and roll show band that produced two Billboard Top 100 hits, "Uncle Kirby" and "Shaka Na Na".  The 5's home base was the the beach in Galveston, Tx, as the house band for the legendary Bamboo Hut and later the Grass Menagerie beach clubs that were The summer destinations for college kids from all over the U. S.  Because of the success of their records the 5 also toured throughout the Southeastern U. S. doing college shows and opening concerts for the super star acts of the era such as the Dave Clark 5, Paul Revere & the Raiders, the Grass Roots, Sam the Sham & the Pharaohs (Wolly Bully), B. J. Thomas, the Fifth Dimension, and others.

Before joing the big success with The Guess Who, Burton Cummings, was fronting his own Winnipeg sensations The Deverons, who'd also been making huge strides releasing a handful of singles of their own.

The Skunks from New Jersey, but they sounded English, and so were chosen to accompany the miniskirted dancers at Swinging London fashion queen Mary Quant’s Youthquake events in US department stores in 1965. The band members had black hair with a white stripe dyed down the middle. Everyone who bought an English mod design from the Puritan Fashion Corporation was given a free copy of The Skunks’ single Youth Quake.

The Coachmen
The Outcasts 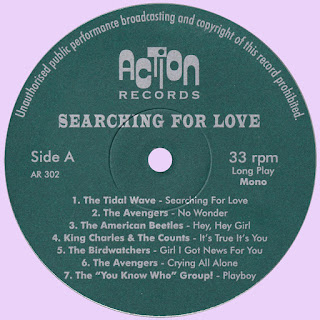 Free Text
the Free Text
Posted by Marios at 11:30 AM 7 comments: