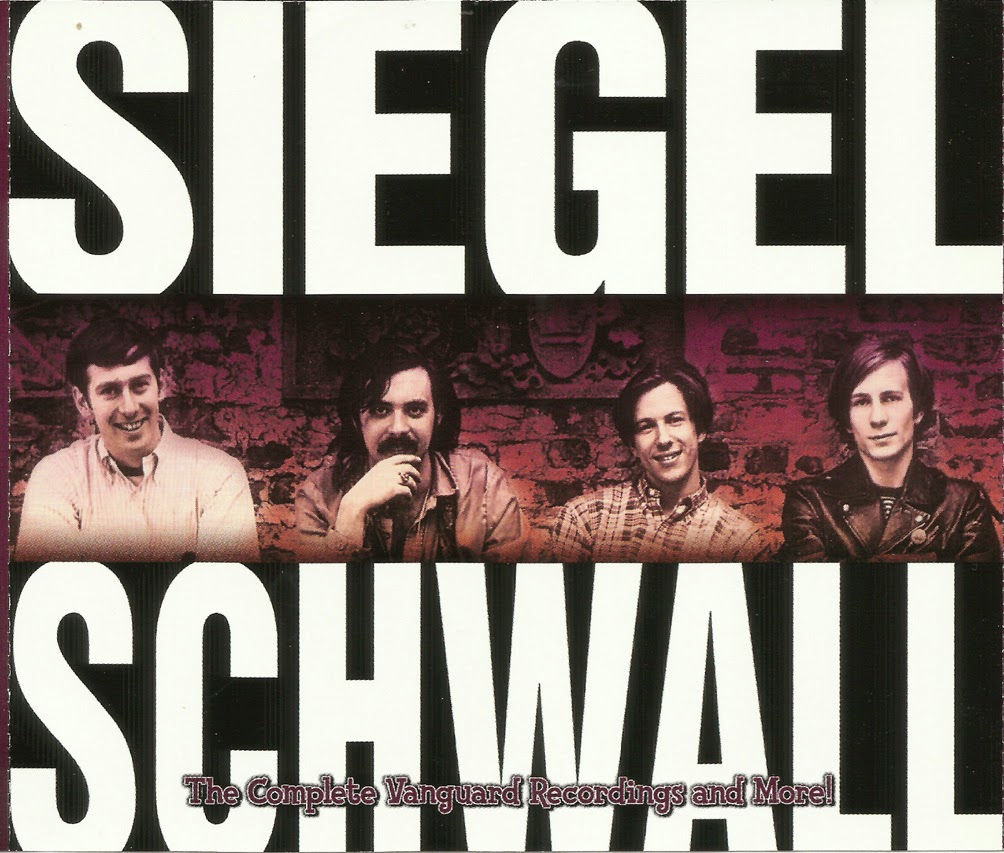 Corky Siegel was born in Chicago in 1943 and musically influenced by Elvis, Chuck Berry, little Richard, Fats Domino, and everything eke on '50s and '60s radio. He had played tenor sax in a high school band that also featured Russ Chadwick, Siegel-Schwall's first drummer. Jim Schwall was also born in Chicago, a year earlier than Corky. He had started playing guitar in high school, influenced by the Weavers and other mainstays of the late '50s folk revival. He played in bluegrass bands, but also took on the influences of folk blues players including Big Bill Broonzy, Lightnin' Hopkins, Robert Pete Williams, lonnie Johnson, and Brownie McGhee. Siegel was barely 21 in 1964 when he met his fellow Roosevelt University music student in an elevator. Schwall was studying composition, Siegel was majoring in classical saxophone. That year, however, Siegel was introduced to the blues by a couple friends who played Dylan-style harmonica (one was Bob Buchanan, of the hit folk group the New Christy Minstrels).

While both played in the school's jazz band, Siegel hadn't noticed Schwall until he saw the guitar slung around his future partner's neck in the elevator. Siegel played a Wurlitzer electric piano with a makeshift bass drum and high hat cymbals underneath. Schwall had the same '50s era blond Gibson B-25 acoustic guitar—with an electric pickup literally bandaged over the sound hole—which he still uses to this day (though it's been rebuilt a couple times since he first acquired it in 1959). As The Two Man Blues Band, Siegel and Schwall auditioned for Johnny Pepper at Chicago's famed South Side blues club Pepper's Show Lounge.

They were then, and still are, unique instrumentalists. An extraordinarily inventive harmonica player with a broad vocabulary of inimitable riffs and tones, he would alternate chunky folk-blues chords with Chicago blues single notes and throw in vocal groans and yips (listen to "Angel Food Cake," from final Vanguard album Siegel Schwall 70). His piano playing was likewise unorthodox: "Down In The Bottom," the Howlin' Wolf classic which opened the band's 1966 self-titled debut album, prompted a puzzled Wolf, who used to sit in with the band frequently and was Siegel's favorite blues Founding Father, to point out that he was playing the key piano part "backwards."

Schwall, who stayed with his sturdy acoustic Gibson because its "boxy" neck could withstand his punishing hard play, was similarly incomparable. His guitar lines attacked from all directions: up, down, sideways, diagonally predictably and from out of nowhere. His slide work, as on the heretofore unreleased "Easy Rider" or the slow blues buzz of Slim Harpo's "I'm A King Bee" from the band's second album Say Siegel- Schwall, was utterly dazzling; so was his mandolin play on that album's "Bring It With You When You Come." (His use of the mandolin as a blues instrument, incidentally, put him in the company of the late Yank Rachell and very few others in using the mandolin as a blues instrument.)

After a few months at Pepper's, the band moved to Big John's on the North Side, where they took the slot previously occupied by the Paul Butterfield Blues Band. Now called The Siegel-Schwall Band, it had solidified a lineup also including bassist Jos Davidson-another Roosevelt student and Mike Bloomfield's bassist-and drummer Chadwick. Within weeks of their first Big John's gig, The Siegel-Schwall Band was discovered by Sam Charters, talent scout (or Vanguard Records, the venerable folk music label.

The author of The Country Blues and producer of such blues greats as Lightnin' Hopkins, Charters was immediately struck by the group's commitment, excitement, and innovative take on the traditional blues genre. He produced the songs on The Siegel- Schwall Band-a mix of covers by major influences like Howlin' Wolf and jimmy Reed with originals in a similar stylistic vein—in one take at Universal Recording Studios in Chicago. he album was released in 1966, just as the San Francisco music explosion was getting underway. Siegel Schwall soon became a big draw in the Frisco scene, sharing stages with virtually every major act from that period including Jefferson Airplane, Quicksilver Messenger Service, and Big Brother and the Holding Company. hey also mode inroads on the East Coast, at clubs like the Bitter End, and Steve Paul's Scene, where Tiny Tim used to open their shows and where the over of Say Siegel Schwall was shot. That album, released in 1967, as recorded in Vanguard's New York studio, using the downstairs washroom for an echo chamber. Jack Dawson, who had played bass in a Detroit band, had replaced Davidson, who left to pursue a career in social work.

Once again, the contents came from the band's set list and continued its founders' use of traditional blues as a base for contemporary expression. One tune, the slow blues "My Baby Thinks I Don't Love Her," would soon be embellished by composer William Russo in "Three Pieces for Blues Band And Symphony Orchestra." (Siegel Schwall would later record it with prominent fan Seiji Ozawa and The San Francisco Symphony for release on the Deutsche Grammophon label in 1973. Ozawa had conducted The Chicago Symphony in the late '60s and, like Charters, fell in love with the band after stumbling upon them at Big John's. They first performed with Ozawa and The Chicago Symphony in 1968, and would later appear with other orchestras; they even joined Arthur Fiedler and The Boston Pops in a concert televised on PBS.)

Say Siegel Schwall is followed in this set with four previously unreleased tracks. "Easy Rider" and "I Like The Way You Rock" are demo versions of late '60s earty '70s concert favorites, while "Don't Want No Woman" and "Sneaky Pete" are outtakes from the first Vanguard sessions. The third Vanguard album, Shake!, was also cut in New York, mainly as a collection of song demos. After its 1968 release, the band, which had toured heavily for two and a-half years, took a year off, returning in 1969 with a new rhythm section in Rollo Radford, who had played with Dinah Washington and Martha and the Vandellas, and the great Chicago blues drummer Sam Lay, who had played in Siegel's interim band along with guitarist Jim McCarty of Mitch Ryder and The Detroit Wheels fame. Drummer Shelly Plotkin was in place when Siegel Schwall recorded its final Vanguard album, Siegel- Schwall 70, at Paragon Studios in Chicago.

Whereas the preceding studio albums could only hint at the exhilarating roller coaster ride of the Siegel- Schwall Band live, Siegel- Schwall 70 fully captured it in two concert performances: "Angel Food Cake" and Seawall's guitar masterpiece "A Sunshine Day In My Mind." They were recorded live at Chicago's premiere showcase dub The Quiet Knight, where the band now held court every Tuesday. To use a term evocative of the time, they had by now become a "boogie band" second to none, and almost every track on the album was a concert favorite.

Siegel, who currently fronts Corky Siegel's Chamber Blues, a Chicago-based blues-classical hybrid also featuring four string players and a tabla player. Schwall now lives in Madison, working as a high school teacher and part time social services worker when not planning a run for mayor. Radford, who went on to play bass with the likes of Professor Longhair, Fats Domino, and Sun Ra, is a special education teacher in Chicago, and also plays in jazz groups.  Plotkin, a master drummer, died of heart failure in 1990.

Yet The Siegel Schwall Band remains "a bond in perpetuity," to use Siegel's designation. A reunion concert recorded in 1987 and released on Alligator Records returned Sam Lay to the fold, and found the group in lop form-and up-to-date, as the "Find yourself another hippie" line in "I Don't Want You To Be My Girl" was contemporized to "Find yourself another yuppie." They still get together occasionally, more than 35 years after their historic first Vanguard album.

And so the Siegel-Schwall magic lives on, and with it, that special Siegel Schwall induced smile. It's all there in Siegel- Schwall's The Complete Vanguard Recordings and More, a deserved commemoration of the timeless talents of two immensely influential musicians-and more. Much more.
by Jim Bessman 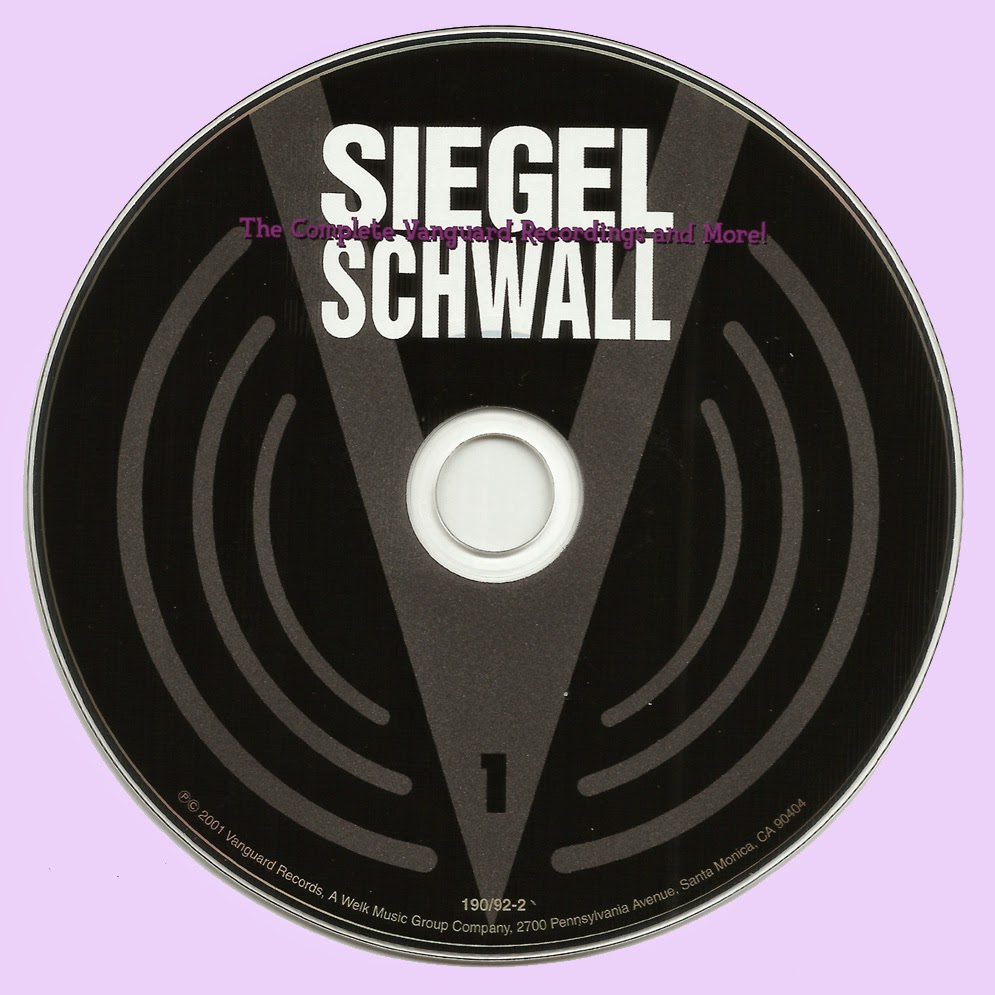 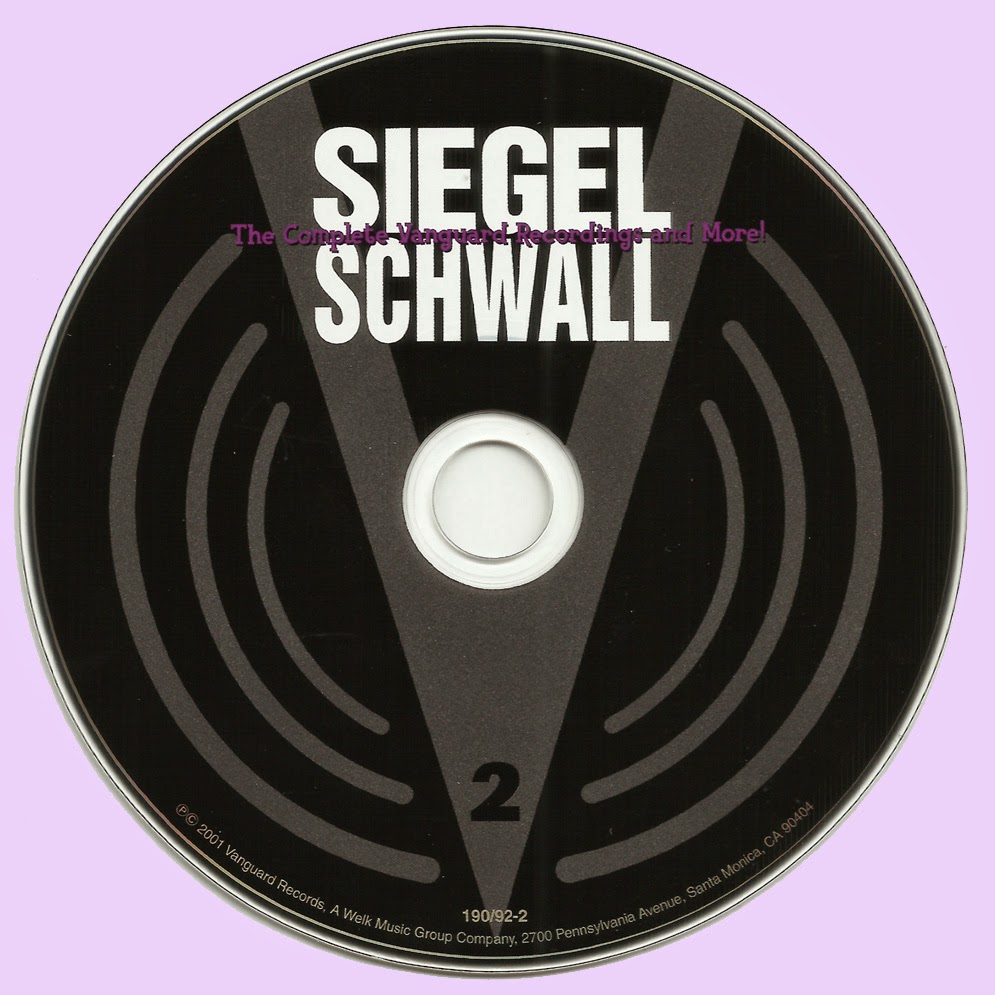 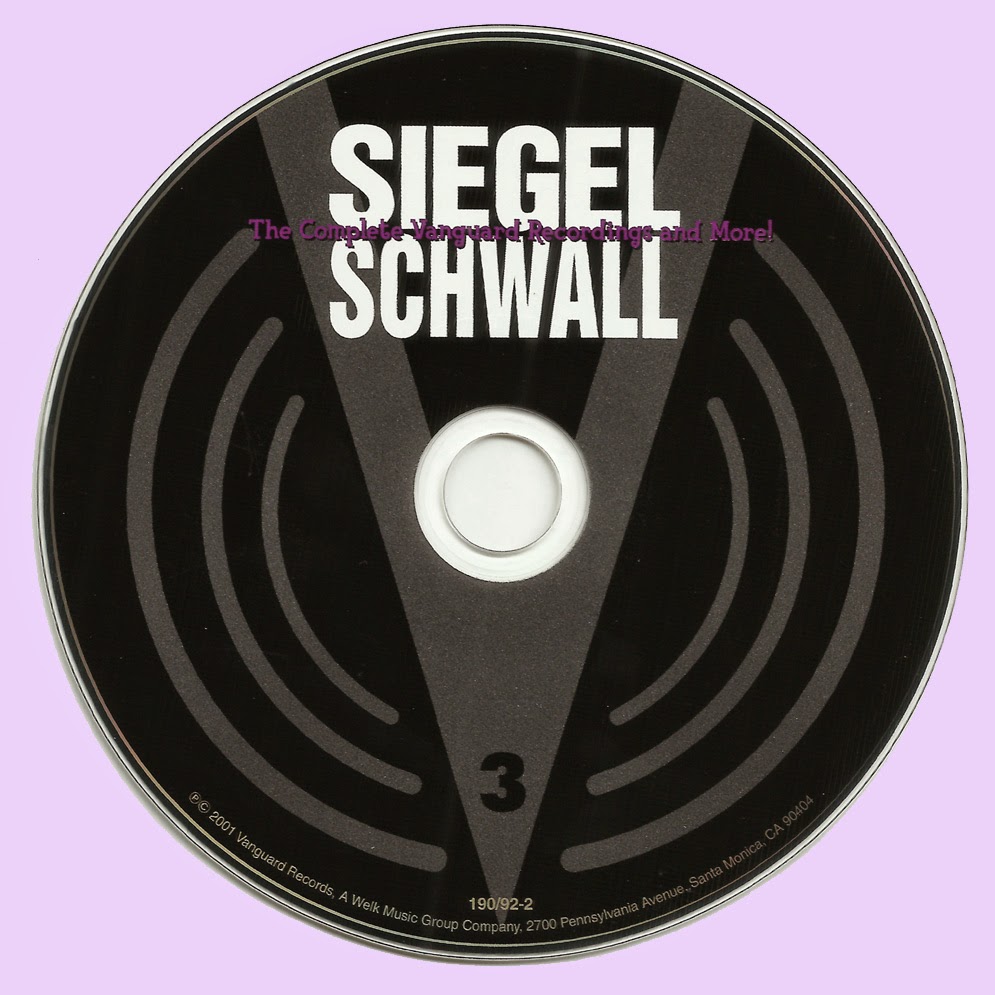 Free Text
Text Host
Posted by Marios at 5:44 AM 8 comments: