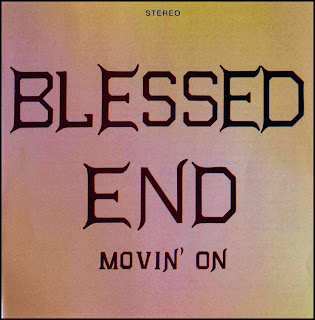 Blessed End was conceived in a 10th grade Geometry class in 1968 at Ridley High School by Ken Carson and Jim Shugarts. Neither one even owned a bass or guitar at that time. They agreed that it would be a fun challenge. Over the next summer they both acquired summer jobs and bought their first guitars. They would take turns at each others houses practicing together. In September of 1969 they recruited another guitarist Lenny Perchowski who was a neighbor of Kens'.

They met Mike Petrylak at Ridley High School and Doug Teti in a bowling league. They asked Doug and Mike to come to one of their practices and tryout for the group. When they came over everyone hit it off and Blessed End was formed. We rehearsed for a couple months and started playing school dances, coffee houses, pep rallies, splash parties and battle-of-the-bands. The band had a loyal bunch of fans and friends such as Angela, Clare, Libby, Lynne, Lucy, Mary Jo, Mary Lou, Sue, Phil and Steve whom we thank for all their devotion.

After playing for about a year Lenny had to leave the band to prepare for medical school. SteveQuinzi, joined the band in the fall of 1970. The band continued playing for after prom events, proms, coffee houses etc.

By the spring of 1971 the band was getting itchy to try doing more original tunes and also Ken and Doug were talking about the possibility of leaving for the Navy and medical school. The band decided to try and write a few songs and see how they would turn out. Over the summer of 1971 Jim and Steve devoted many hours composing the ten songs on the album Movin' On. The band rehearsed relentlessly for the recording session.

During the summer a local studio owner asked to borrow some of the band's equipment and Steve bartered for studio time in exchange. Movin' On was recorded in just one day with several songs being recorded totally live.

Several good paying jobs came along and the band had 1000 copies of Movin' On pressed. To save expense Jim had the album cover printed at a print shop where he was working at the time. Ken did the artwork on the cover. The band would always play one set of original music at each gig and then sell some albums. We sold enough records to cover expenses but the record never took off commercially.

Not long after recording the album, Ken left the band to join the Navy, mostly because his dad kicked him out of the house. After that the band lost some character. Blessed End made only one other recording without Ken and that was a remake of Can't Be Without Her with a substitute bass player.

Shortly after Ken was replaced by Rick Swanson, Jim left the group and was replaced by Ernie Fletsig who later had some personal problems, and had to leave the band. His replacement was Lou Grieco who had a personality clash with Mike. By the winter of 1973 things got pretty messy and Steve left to join a top 40 band and Blessed End formally ended.

Jim, started Argus at the end of 1971 and Ken and Mike joined the band, after Ken got a medical discharge from the Navy in 1973. They played together for 10 years.

Doug went on to college and is now a professor of psychology at the University of Maryland. Steve moved to Miami, Fl. in 1978 where he does music production for advertising and corporate presentations at Steve Quinzi Music. Steve is also a New Age artist with three albums out, The Pond, Vanishing Rainforest, and Rhythm Of The World . Mike went on to stay in the area and work as a self-employed auto mechanic. Ken and Jim went on to work at Boeing Helicopter Co. as research and development mechanics. Jim worked there as a manager of several departments until July of 2001. He now is working on a music project, and is President of Web Builder USA - a web page design company. Ken passed away from pancreatic cancer in 1992.
The Blessed End 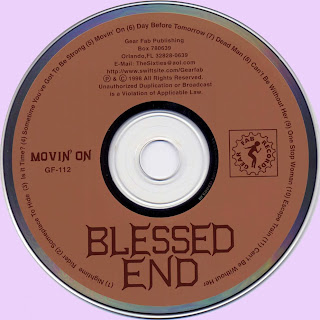 Free Text
Text Host
Posted by Marios at 10:26 AM

Enjoyable album from that great period of rock.Many thanks!!!

Thanks for the upgrade Marios!

A very good choice. Thanks very much...

never heard this album.Hope it's good.As always,thank you for sharing and giving us the opportunities to explore new horizons.

THANKS A LOT FOR SHARING THIS ALBUM,MARIOS. I APPRECIATE YOUR WORK.GREETINGS.

It seems that Blessed End have indeed come to a blessed end, for now at least.
Please can they be brought back to life ?

Thank you Marios. This is fabulous music.