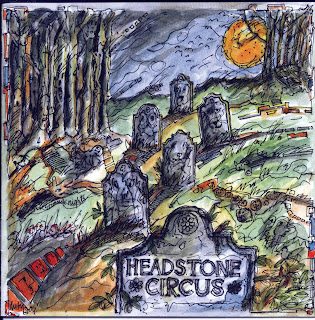 "Around 1966, Nick Bonis, Mike Johnstone, Randy Pope, and I formed a psychedelic band. On Halloween night we went to an old cemetery, dropped acid, and spent a very strange night among the tombstones. The tombstones appeared to be melting and taking on animal shapes. Some of us saw spirits, and I'm not sure what I saw, but it was disturbing. Afterwards, we referred to that night as the 'Headstone Circus.' It seemed appropriate to call ourselves Headstone Circus as a band so we did."
by Glenn Faria

The band plays a (rather) West Coast style while recorded on the east coast, with a certain Crosby, Stills, Nash ‘n’ Young / Buffalo Springfield or Neil Young -Crazy Horse period- influence, but additionally with a more bluesy side-effect, and with some portions on certain tracks, where a smoky dark bluesy feeling is improvised calmly upon. This is of course the acid bluesy side associated with something of the east coast that gives this slightly smokey feeling. The lead vocals have a warm attractive effect and fit well with the West Coast feeling.

Several of the more song orientated tracks are more acoustic. The last four, and also more simple,  I guess are more like rough demo versions. I am sure that if they would have had a chance with a big studio production and treatment on some tracks, these could have been better, (-a few tracks also suffered from a few worn-tape errors)-, while most of it for me is already great as it is, and makes it, almost essential to check it out, especially when you like the CSNY.

A track like “Summer’s Gone” could have easily been a Neil Young track, and still is one of my favorite songs. After a while, singer/composer Glenn Faria left the group only because he was offered a solo contract. This solo album was reissued by World In Sound some years ago. Here, the Neil Young influence still is noticeable, but for me this solo album isn’t so rewarding as the previous Headstone Circus, but it also features a nice redo of the already mentioned “Summer’s Gone” song.
Psychedelic-music 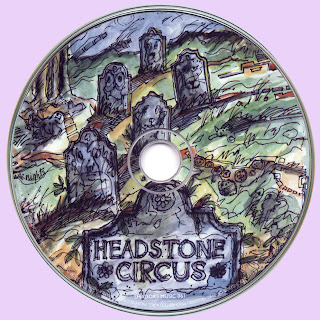 Free Text
Text Bin
Posted by Marios at 7:20 AM

Thanks Marios and Nelson, this looks very promising!

Thx for this. Anyone else hear a bit of "Candle in the Wind" in the track "Healer" ?

hi Marios, if that is acid or psych, so I'm the Pope !
this is really bad & none originality !

Hi Jeff,
I'm not much in to religious things, popes, preachers or patriarchs, but all opinions are acceptable, even if I disagree, as the Voltaire said.
Thank you.

It would be nice if we could calm down,
There is no reason for personal confrontation,
this is a music blog, if you want to talk about music within reasonable limits I'll be happy,
please don't force me to erase comments.
Thank you.

Despite that, Headstone Circus (i have the LP) is a good album for me. Marios, sorry for my crude words.

Hi, this is Glenn Faria, so glad to
see somebody likes my old music. I had a lot of fun doing it and I still do it with my new songs. Thanks for listening. Bye for now.eb

Most 60s music this obscure is pretty terrible, I've come to learn. I'm not talking about the 13th floor elevators or ultimate spinach or the united states of america or other forgotten mid level psych like that-I mean all the oogles of crap that didn't get published or sold 50 copies or less-get real, it usually isn't very good. But there are always exceptions that make listening to all that terrible shit worthwhile, whether its The Brain Police, Headstone Circus, Odyssey, etc. One thing I want to say about this group is that whoever's playing lead guitar is truly gifted. So much passion, such great bends and wild, disjunct pentatonics. But the harmonies are also amazing, and the songwriting displays an undeniable strength in melody and form. I was particularly impressed by You Don't Know, which has a chorus I can feel deep inside. This is no pointless flattery. I really am a 60s music fanatic and when I hear something this good I want to say something about it; its just my instinct, so there's a little mini review for you. And one last thing: don't approach Headstone Circus expecting a psych record, because it is much more roots rock, though it doesn't surprise me they took acid.