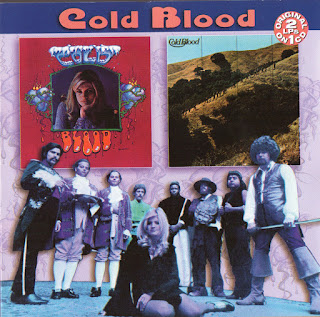 In the heady days of the '60s pop music explosion in the San Francisco Bay area numerous bands formed, played a few dates and then their members dispersed to more successful groups. One example of that was the New Invaders, who had success in the Bay Area. But a re-formed group, Cold Blood, scored a national hit single and six of their albums made the Billboard charts.

The band was an artful blend of rock elements with soulful horns and a powerful vocalist, a bit like Tower Of Power, another successful Frisco band. Cold Blood sported the singing prowess of Lydia Pense, whose strong stage presence and bluesy voice generated comparisons to Janis Joplin.

Pense even held her own on a version of "Piece Of My Heart," one of Joplin's signature songs. Pense was accompanied in the band by original members Raul Matute (piano and organ), Rod Ellicott (bass) and Danny Hull (sax). A number of other players came and went,  including Jerry (also cited as "Larry" in some sources) Jonutz (trumpet or sax), David Padron (trumpet), Larry Field (guitar) and Gaylord Birch (drums).

The band often played the Fillmore, a hugely popular and influential San Francisco theater owned by Bill Graham. In the fall of 1968, Graham opened his own Millard booking agency.  In early '69, he established a holding company, the Fillmore Corp., which included divisions dealing with management, lighting and soundtracks.  He also started Fillmore and San Francisco Records. Cold Blood signed to San Francisco, which issued their debut self-titled album in late 1969.

It was produced by David Rubinson, who worked with most of the artists in the Graham fold.  He also oversaw albums by everybody from the Chambers Brothers and LaBelle  to Moby Grape and the Pointer Sisters as well as numerous Santana releases. "Cold Blood" was a mix of originals and covers, including a take of "You Got Me Hummin' ", a 1966 soul smash for Sam & Dave written by Memphis stars Isaac Hayes and David Porter. Issued as a single in late 1969, it charted in early 70.

The success of "Hummin"' and substantial airplay for a follow-up, "I'm A Good Woman," placed the album into the Billboard Top 30, where it enjoyed a 29-week run. Their next album - which is also included in this collection - was issued in early 1971. "Sisyphus" was produced by Fred Catero and the band.  Catero had been the engineer on their first release and would go on to work with Santana and other Frisco artists.

There were other local artists who played on "Sisyphus," including the Pointer Sisters, who sang on "Your Good Thing," and Jose "Chepito" Areas, a member of Santana's band  who played congas and timbales on "Funky On My Back" and "Shop Talk." "Sisyphus" was another success, moving onto the Billboard chart for more than three months.

A single, "Too Many People," also generated a lot of airplay. Then came problems with Graham's business ventures and, in 1971,  he announced plans to close the labels and the Fillmore in San Francisco along with the Fillmore East in New York City. Always a colorful and creative businessman, Graham documented the years of the Fillmore with the three-album "Fillmore: The Last Days," drawn from a series of live concerts at the San Francisco venue.

One of the featured bands on the best-selling set was Cold Blood, which tore through the blues standard "I Just Want To Make Love To You," one of the highlights of their first album.

While Rubinson moved on to open a state-of-theart studio in San Francisco and Graham continued to produce concerts and tours by acts such as the Rolling Stones and Bob Dylan,  Cold Blood wasn't about to give up because their label had called it quits. Signing with the Reprise division of Warner Bros., they issued the "First Taste Of Sin" album in the spring of 1972.

It sold well and was followed a year later by "Thriller!," also on Reprise. In 1974, the band moved to Warner Bros, for "Lydia," which acknowledged the focus on their lead singer.  In 1976, signed to ABC Records, they worked with Memphis producer Steve Cropper (guitarist for Booker T. and the M.G.s) on "Lydia Pense & Cold Blood?'

By the late 70s, Pense and the members of Cold Blood disbanded. She spent time raising a family while the rest of the members turned to other projects. One, drummer Gaylord Birch, worked with Santana on the album "Festival" and joined the guitarist on "The Healer," his 1989 project with John Lee Hooker.

In 1998 Cold Blood briefly re-formed for some dates and there was even talk of a new album, but nothing was out by the end of the decade. Meanwhile, fans of the band can enjoy the best of their output from the San Francisco Records days with these two albums
by Mark Marymont 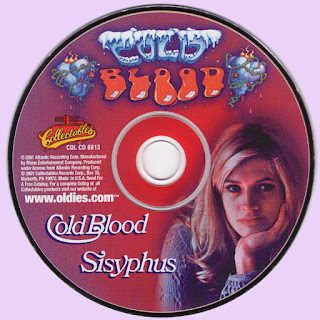 Free Text
the Free Text
Posted by Marios at 2:44 AM

Recently I have problem with the cue file to open with foobar2000, and I don't know how to resolve it, I remember this last files Cold Blood, Peanut butter Conspiracy Barbara, and Redwing, if you know how to solve it please send me the solution.

Many Thanks Marios, works well and i'll use to other things that i do with foobar2000

Thanks for sharing these Cold Blood releases. There's never been anything better than East Bay funk!