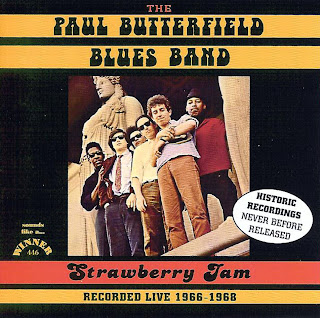 Mark Naftalin's Winner Producing Company has released one of the most anticipated Blues releases in 1995. These live nightclub recordings, collected by Naftalin document the period from 1966 to 1968. This would cover the period from the first album to the "Pigboy" era, which was the bands's artistic peak.

The locations vary from the Whiskey A Go-Go, Golden Bear, New Penelope, and JD's. Unlike many recordings that merely have some historical significance (like those endless Hendrix jam tapes), these really capture a band in top form. The cuts are not in chronologica order.

One thing becomes apparent when you listen to this CD; Paul Butterfield is clearly the front man here. Bloomfield is present on many of the cuts, of course, but it's fairly obvious that the dynamics of the band were much different in live performance. Mark Naftalin and Elvin Bishop appear to be strong elements of the live sound, as opposed to it being the Paul and Mike show. In fact, the most progressive of the songs is a Mark Naftalin composition.

The CD opens with "Just To Be With You," recorded live at the Whiskey A Go-Go (CA) in 1967. It's a slow, brooding blues with a loose and powerful Butterfield vocal with his harp work cutting sharply over a powerful, rumbling bottom. This leads to a lively 'Mystery Train," which I must admit I liked better than the original version on record. Butterfield's harp sounds explosive, and the keyboard work by Naftalin gives the song a jazzy, yet hard edge.

"Tollin' Bells," an edgy slow one follows, and features effective tremelo-guitar effects. "Cha Cha In Blues," kicks in hard afterwards. Unlike 50's cha-cha type blues, this literally blows through the beat and becomes a manic harp bop with harp and organ. It must have been a great song to hear live.

The pace slows with a 1967 version of "Rock Me," a long cut that slowly builds towards a full band climax, with a hard-edged jazz feel that works. This band interacted with horns and incorporated jazz influences as well as any I've ever heard.

The groundbreaking "One More Heartache," follows and is familiar to those who have followed the band. The hard driving jazz flavor clearly anticipated the later "jazzy horn bands" such as Electric Flag, Blood, Sweat, and Tears and Chicago.

Naftalin's "Strawberry Jam," follows, and features a 1968 era band with David Sanborn. It's a very modern blues, that would sound contemporary even today on a jazz station. It's sort of an impressionistic piece, with a complex structure that would not have been out of place during a Miles Davis set.

One thing that becomes obvious while hearing Butterfield play harp in "Strawberry," is that he really understood how to integrate the instrument into a jazz context. "Come On In This House," comes next, and is a good slow one from the original lineup with Bloomfield.

The CD ends with the classic "Born In Chicago," and is probably closer to the way the band did the number in concert. The album version was a harp and guitar riff number with a lean, percussive feel. This live version sounds fuller, with the band surging forward on the basic riff. The organ (more prominent than the first album suggested) adds drive to the top and bottom end. Added to an already explosive rhythm section, this version is almost like a rave up.

It's been often said that a turning point in the San Francisco Rock scene was the debut gig at the Fillmore West by the Butterfield Blues Band. People like Jorma Kaukonen, of the old Jefferson Airplane, said that after seeing this band they all realized what a band that could really play was like. Especially after hearing the immortal "East West."

This CD is a glimpse of what they all saw. I've heard live tapes from time to time (festival concert stuff, to name an example), and this is definitely the best of the lot.

One reason might be that nightclubs generally are the best live atmosphere for blues, and such gigs would tend to show us a more loose and expansive band. These tapes, made on mono or stereo portable tape recorders do sound rough at times, but in this digital-era, it would be well to keep in mind that some of the most immortal recordings in the Blues were made with much less sophisticated machines.

This CD is both a historic document, and most pleasantly of all, a recording that, in my case, adds yet more great music to the blues from a band everyone should hear.
by Al (Epinions) 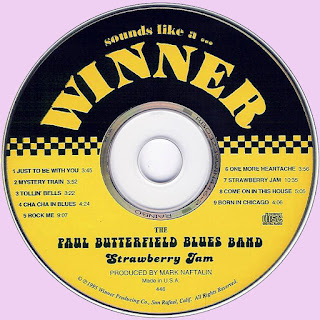 Free Text
Text Host
Posted by Marios at 7:54 AM

Thx very much Marios! Been enjoying your PBBB flood!

I can't wait to listen to this one ! Many thanks...

Oh yeah, bring on the Jam.

Thanks so much Marios, what a great find!

I would have loved to have seen Butterfield/Bloomfield in a club setting like The Whiskey A Go-Go in the 60's, must have been a real gas! Electric Blues/Chicago Blues at it's finest.

Thanks Marios for posting another terrific web gem!!!

Any chance of reposting the 60s Paul Butterfield band albums? That's actually what I'm most partial to.. Thiink some angels or the like sprinkled magic dust all over the 60s , which is why even the most ordinary things were somehow really special.
Well, that's my excuse, anyways, and I'm sticking to it :-)
Doc

Forgot to mention, that I did notice some of the later 60s ones up again, and thank you so much!

Right on! I see you're getting to them.. and this is one I was really wanting to hear! THX! You're numero Uno in my books right now :-)