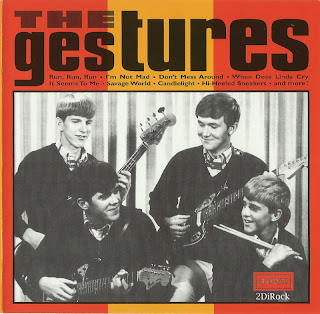 The Gestures were absorbed by the madness of the sixties just as they began having fun. The world teas falling apart when the energetic, brilliant youth of this fine group was just taking shape. Their music was infectious. Their live appearances a sight to behold.

Their young drummer bad to stand in order to pump that big bass drum. Their music was inspired. And they were so young. The world passed them by on the way to Vietnam, assassinations, political treachery and Purple Haze, The world had no time far fun. The Gestures were fun. I smile just thinking about them.
by Lou Waters

The following newspaper editorial introduction, originally appeared in the Mankato Free Press, and best summarized the feelings of local Mankatoians toward their number one Musical acclamation - the Gestures: "Growing up teen in Mankato, Minnesota in the early 1960s gave us three indelible memories: Charlie Poliquin's ark, the flood, and the Gestures.

Poliquin was the eccentric who beached a homemade houseboat on the riverbank near the Century Club and stocked up on notoriety, 25 cent tour fees and provisions for a float down the Mississippi River to the Gulf of New Orleans." 'The flood of 1965 got all the high school kids out of class to pass sandbags hand to hand in a real adventure - kids united against the elements - and in the 11th hour, the town was saved." 'The Gestures were the local Rock & Roll band that for a few shinning moments made us if not proud at least tolerant of being from Mankato.

Minneapolis could keep the Trashmen, the Castaways, and the Underbeats... we had the Gestures and 'Run, Run, Run’.
by Tim DeMarce 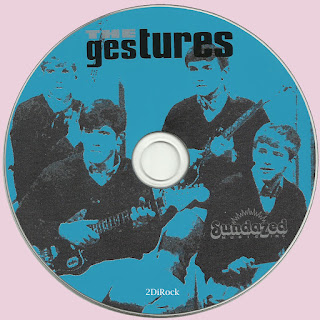 thanks a lot, great album

I tried it, not raw enough garage for my taste, too clean-cut and boring.

This one brings me back memories of the old 'Pebbles' days...
Thanks so much!