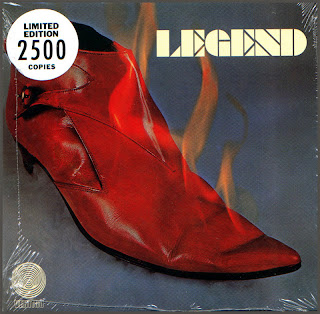 In some circles, Mickey Jupp is something of a minor legend, a roots rocker with excellent taste and a cutting wit, best heard on the songs "Switchboard Susan" and "You'll Never Get Me Up in One of Those," both covered by Nick Lowe.

Basher's endorsement is a clear indication that Jupp is a pub rocker, a guy who specializes in laid-back good times, so it shouldn't come as a great surprise that his first band, Legend, was proto-pub, an unabashed celebration of old-time rock & roll, filled with three-chord Chuck Berry rockers and doo wop backing vocals. Nevertheless, listening to their 1970 LP is a bit of a shock, as it's completely disassociated with anything that was happening in 1970, even with Tony Visconti enlisted as their producer.

Legend's sensibility is ahead of its time in its retro thinking, pointing the way to the rock & roll revival of the late '70s and not even that similar to the country-rock of Eggs Over Easy or Bees Make Honey, as this has little of the rustic feel of the Band: it's just straight-up oldies rock, a trait emphasized by those incessant doo wop harmonies that are on almost every cut on this LP (but do disappear on the bonus live cuts on the Repertoire reissue, possibly because they were too busy playing to harmonize).

These slightly silly flourishes do have a lot in common with the wry humor of Nick Lowe, who at this time was denying this mischievous streak as he attempted to sound like Crosby, Stills & Nash, but at this point, Jupp was largely on his own doing this light, good-time pub rock. That may be why it sank without a trace at the time, but heard apart from its era, Legend is a minor delight, one of the first flowerings of the pub rock sensibility.
by Stephen Thomas Erlewine 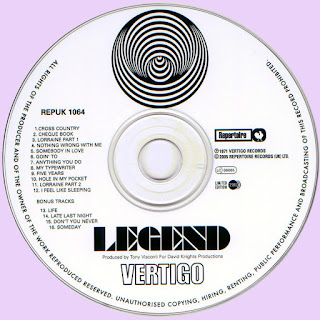 Free Text
Text Host
Posted by Marios at 4:28 AM

Nice One. Thanks for the expanded edition...

Wonderful, wonderful album. LOVE Mickey! Got any of his other albums Marios?

Thank you so much kind sir. I enjoyed this album so much, definitely a keeper.

Thank you for this very good album, did you have the other Legend - Legend 1969 reissued in CD in 2007, that will be perfect.

The link for this is dead, could you reupload please, thanks in advance

Link is again down. Reupload, pleaase, I don't found this album nowhere not even in mp3, only there's some songs in Youtube with a bad audio

Thanks Marios for another Masterpiece.