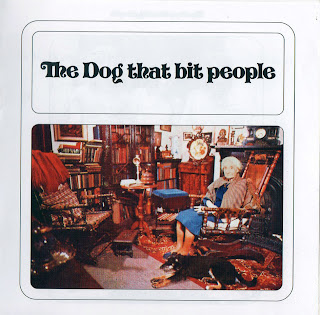 In my recommended review of the sole album by Birmingham band Locomotive (which incidentally was also recently reissued on the Esoteric label [ECLEC 2228]), I ended by posing the question "Perhaps they [Eclectic] will get round to reissuing the Dog That Bit People album which featured Mick Hincks and Bob Lamb after the demise of Locomotive?" And I am happy to say that after only six years and a change of label name to Esoteric, my wish has come true!

The recording of the Locomotive album was somewhat traumatic and resulted in the splintering of the group, leaving only bassist Hincks and drummer Lamb. The pair were determined to carry on recruiting keyboard and guitar player Keith Millar and guitarist John Caswell. It was this line-up that released the final Locomotive single Roll Over Mary b/w Movin' Down The Line both of which are included on the Eclectic/Esoteric reissues. A desire to move away from the "doomy prog-rock kind of sound" resulted in a somewhat bizarre name change to The Dog That Bit People, chosen randomly by dipping into a book of short stories by the American humorist James Thurber.

Symptomatic of the faith that record labels had of their artists at that time, Parlophone keep the band on their roster, despite the poor sales of the Locomotive album. Following extensive, low budget, touring throughout Europe, the group entered Abbey Road Studios, rubbing shoulders with The Beatles who were busy with their final album, and started to lay down the tracks for their debut album.

Mostly recorded live with only essential overdubs added later, the album maintains a rather fresh feel, even after 40 years. The variety of the song styles also helps to give the album a diversity which adds to its enjoyment factor. Noticeably drawing on influences from the West Coast of America, the album successfully combines subtle acoustic passages with more rockier elements. A prime example of this is Sounds Of Thunder which could almost derive from the catalogue of Crosby, Stills, Nash and Young (although without the vocal harmonies) with the twin electric guitars intertwined with their acoustic relatives.

The group do provide excellent harmony vocals on the opening track, Goodbye Country, a lovely summer ballad that makes one instantly forget that currently outside all is frozen and snowbound. Elsewhere the spirit of Neil Young, an artist Bob Lamb recalls the group were heavily into, infuses many of the instrumental passages, such as on The Monkey And The Sailor where Lamb's drumming is precise and enticing at the same time. Lovely Lady, the single taken from the album, is melodic, catchy and yet, bizarrely was nowhere near becoming a hit; the more progressive elements of the group are covered in the effortless Cover Me In Roses which does indeed, as the sleeve notes state, sound in places not dissimilar to early Barclay James Harvest.

The early '70s were a time of great musical experimentation and The Dog That People were not immune to such experiments. Take Reptile Man for instance, with its strangely treated vocals and heavy riff that might have found place on a Black Sabbath album. Or at the other extreme there is the brief Country and Western number Someone, Somewhere which, if nothing else, shows that the band were thoroughly enjoying themselves! The rest of the material is just as enticing and entertaining.

Red Queen's Dance standing out with great harmonies, more twin guitars and even a jolly honky tonk piano part. Tin Soldier (not the same as the Small Faces song!) is majestic and once again plaudits go to Lamb for his interesting drum patterns. Finally, Walking another ballad, is lifted by the Mellotron parts that add to the warmth and sumptuousness of the piece.

Bonus track, Merry Go Round, the b-side of Lovely Lady, bears resemblance to Badfinger and its inclusion on this reissue totally justifies the replacement of my current CD version of this album with the new Esoteric version. Of course, it is not just the bonus track that makes this version, the label's typically excellent re-mastering and the informative booklet all add up to an excellent reissue of an obscure but delightful album.
by Mark Hughes 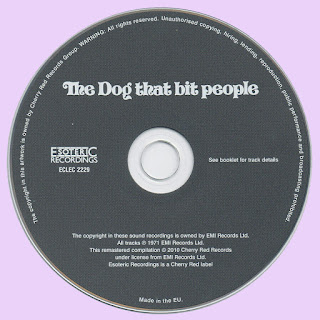 Free Text
the Free Text
Posted by Marios at 5:34 AM

Thanks for the post. The sample sounds fine indeed.

Thank-you so much, Marios! I have only been able previously to locate an mp3 version so this is very greatly appreciated!

I am playing in a band with Mick Hincks NOW, and we occasionally have guest appearances with John Caswell!

I recently came into possession of a copper photo printing plate that features the band " the dog that bit people ". It appears to be one of two plates that were used to print flyers and posters for the band
Has anyone else seen one of these ?
It's currently in the hands of a local artist who with input from myself, is cleaning it and putting it in a suitable frame. I'd really like to get in touch with someone from the band to see if it is the genuine article.
So if anyone out there knows how to get in touch with TDTBP Please let me know. Okay, that's all for now I'm going to have a couple of beers and listen to the Grateful Dead.
ROCK ON!

I can answer your question. I was the producer of The Dog That Bit People album and also that band's manager. Jim Simpson - jim@bigbearmusic.com