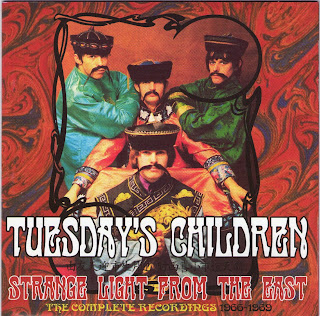 'Tuesday's Children' were formed in 1966 by Phil Cordell, Mick Ware and Derrick Gough who had been in North London band 'Steve Douglas and the Challengers' who later changed their name to 'The Prophets'. The Prophets did some recording with producer Joe Meek, but nothing was ever issued. When Steve Douglas and Freddie Fields left, the others reformed the band as Tuesdays Children. Paul Kendrick subsequently joined on bass guitar.

The first single was written by Phil Cordell and was recorded at Maximum Sound studio in The Old Kent Road, SE London. The engineer was Vic Keary and it was released on the Columbia label, DB7978 in August 1966. Tuesday's Children personnel was then Phil Cordell and Mick Ware, guitars, Paul Kendrick, bass guitar, and Derrick Gough, Drums. Dave Vidler (mentioned on the label) was the groups' manager.

The B side was another song written by Phil Cordell entitled 'High and Drifting'. 'When You Walk In The Sand' was in the Radio London Fab Forty for 2 weeks, no. 39 on 7th August 1966 and at no. 27 on 14th August 1966. Radio London was one of the pirate radio stations that were broadcasting at the time, they were put out of business in 1967 when the government passed the Marine Offences Act,  BBC Radio 1 started directly as a result of this. Radio London also owned Pall Mall Music who published the Phil Cordell songs that were the first 3 Tuesday's Children singles.

"Strange Light From The East" was again recorded at Maximum Sound studio and was written by Phil Cordell This single was released on the King label KG1051 and was released in January 1967. The King label was owned by Rita King and it and its subsidary labels were more associated with ska and reggae music at the time. Tuesday's Children managed to get a front cover on the pop magazine 'Fab 208'  as publicity for this single. (see Tuesday's Children archive page). B side was a reworking of the Buddy Holly song 'That'll be the day'. 'Strange Light From The East' only made the Radio London Fab Forty for 1 week, it made no. 37 on 29th January 1967.

Phil Cordell quit Tuesday's Children in summer of 1967 and subsequently had solo hits as Springwater (I will return) and in Europe with 'Dan The Banjo Man' amongst others, he also had a single  'Red Lady ' released on Warner Brothers WB8001 in 1969. In August 1967 Bob Hodges (Hammond organ, ex Attack), Phil McKenzie (tenor sax, ex TNT, later Rod Stewart band) and Roger Davies (baritone sax) joined the reformed Tuesdays children.

Trumpet player Hilary Roy also joined and did 4 gigs with the group in September 1967. 'Baby's Gone' was recorded at Abbey Road studios on 19th September 1967 and 3rd October 1967, the whole band played on the session plus some brass players from producer Jack Dorsey's band. Mick Ware sung the lead vocal and backing vocals were supplied by girl group the Paper Dolls. There is also a demo version of 'Baby's Gone' that has some brass on it but not the backing vocals. The song was written by Peter Callander and Mitch Murray and was released on the Pye lanel, no. 7N.17406. The B side was written by Mick Ware and was titled 'Guess I'm Losing You', this features the baritone sax of Roger Davies and the tenor sax of Phil McKenzie. 'Baby's Gone' was released on 10th November 1967.

By December 1967 Tuesday's Children had become a 4 piece again with the departure of Roger Davies and Phil McKenzie. 'Ain't You Got a Heart' was another Murray/Callander song produced by Jack Dorsey with help from some of his brass players. It was recorded at Pye studios in London on 9th January 1968 and the B side 'In The Valley Of The Shadow Of Love' (written by Mick Ware) was recorded at the  same studio on 12th January 1968. The B side also featured backing vocals by Paul Kendrick and Bob Hodges. The A and B sides were switched sometime after release but the long classical intro to 'In The Valley' did not make it very radio friendly.

'Bright Eyed Apples' was originally going to be the A side but 'She' became the A side after it was featured in a short film '29' which starred Alexis Kanner who had been in the TV series 'Softly Softly' and 'The Prisoner'. The film ran for just 26 minutes and also starred Yootha Joyce, who was well known as a TV actress appearing in the comedy 'George & Mildred' amongst other shows. Tuesday's Children had a cameo appearance in the film in a scene in a nightclub, which was filmed at the London club 'Sybillas' on the 6th April 1968, the group receiving the princely sum of £45.00 for its appearance.

When the film was released it played as the 'B' movie to cult film 'If', directed by Lindsay Anderson and starring Malcolm McDowell. 'She' was written and sung by Mick Ware who also did the orchestral arrangement with Bob Hodges. Johnny Arthey directed the orchestra on the session. 'Bright Eyed Apples' had been a hit for an English group called 'The Rokes' in Italy under the title of 'Mele Mature'. The original (which was written by Shel Shapiro and Roger Shepstone of the Rokes) featured a sitar which was a popular instrument at the time, mainly due to George Harrisons influence.

Sometime before signing to Philips in 1968, Tuesdays Children recorded two Mick Ware songs: 'Mr Kipling' and 'Baby I Need You'. They were recorded on 6th, 13th and 15th May 1968. Although finished they were never released. 'Mr Kipling' and 'In The Valley Of The Shadows Of Love' were released on a Sanctuary Records 1960's compilation CD some years ago.

I also have note of two sessions on 5th and 12th December 1968 when the band recorded two songs titled 'Love' and 'Rain' and also 'Ritual Fire Dance', although the finished version of this was recorded in 1970 (see Czar: Other Recordings page).

Tuesdays Children did a Radio 1 recording on 1st December 1967 that was broadcast during December on 'Petes People', a Sunday night show presented by DJ Pete Murray. As far as I can remember 4 songs from the live set were recorded in a 3 hour session. This was the first thing that the group had done as a 4 piece after the departure of the brass players on 26th November 1967.
by Bob Hodges with help from Mick Ware 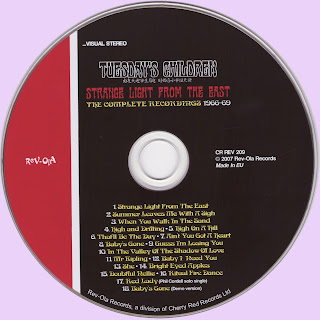