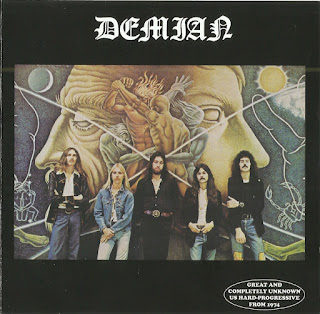 Great and completely unknown US hard-progressive from 1974. This is not a better-known Demian group from Texas (popular for their classic, heavy rock LP on ABC Records from 1971, ex-Bubble Puppy), but completely different band which recorded their album...in Austin!

This privately pressed and now very rare concept album was issued in 1974 by local Starbust label. It contains an excellent and quite eloquent rock opera, with trippy organ work and very fine and strong vocals similar to early David Bowie, Lou Reed, Iggy Pop,  little bit of Peter Hammill's dramatic way, and the theatrical approach of Arthur Brown. Musically, they encapsulate the aspects of Zappa's styles, and sometimes they sound  like "The Doors meets early Bloodrock".

It´s an amazing record, with plenty of great hooks, and unusual psychedelic sounds and solid, hard rock music with a distinct, progressive tones. It´s a really hard to believe that this excellent LP was never reissued before! 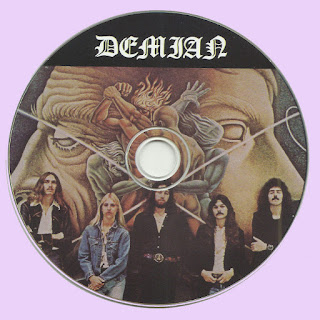 First time on CD!'Rock Star Farm' is a kind of ambitious, moving rock opera about the most negative aspects of the rock lifestyle, or ... premature death. More on this in the libretto copied inside the booklet, but the music itself is full of changing climates, very original, very catchy and very professional cross late The Doors of the hard rock sound (free rate +organ Hammond) . All of them, quite short recordings form a kind of 35-minute, rock suite at which it is difficult to get bored, and certainly worth exploring! Very good, clean sound quality Remastered (like all CD Flawed Gems) from the original vinyl.
@Marios,Thanks for the effort!

Thanks Marios, never heard this CD. This is not Demian/Bubble Puppy texas band.

Hello Mario - Could you please repair the link for Demian - Rock Star Farm. Thanks very much.